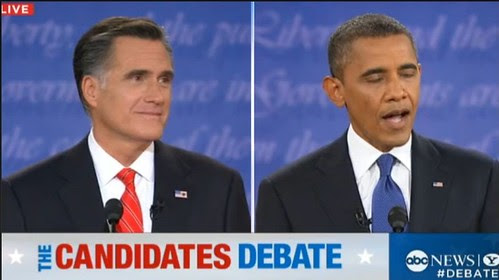 As All Iraq News reports, last night President Barack Obama faced Governor Mitt Romney for a closed debate (closed to third parties).  This was so beyond "The Christ-child fumbles."

Immediately after the debate, Ron Suskind probably called it best, Mitt Romney seemed to want to win while Barack was just stumbling on stage.

The impression that he wanted to be anywhere else was cemented with Barack's first response.

For those who've forgotten, the question was, "Let's start the economy, segment one, and let's begin with jobs. What are the major differences between the two of you about how you would go about creating new jobs?"

And the response began?  "There are a lot of points I want to make tonight, but the most important one is that 20 years ago I became the luckiest man on Earth because Michelle Obama agreed to marry me," Barack babbled.  "And so I just want to wish, Sweetie, you happy anniversary and let you know that a year from now we will not be celebrating it in front of 40 million people."

Oh, gee, is the presidential election intruding on your personal life?

The whine had opponents thinking, "Well maybe next year you'll be back home at your mansion in Chicago."  Worse, it reminded people that while the country has struggled through the Great Recession, Barack started his term thinking America wanted 'date nights' for Barry and Mitchie when what they wanted was to see a president working at improving the economy and creating jobs.

Funny how the date nights disappeared as the anger and outrage over the lack of job creation increased among the voters.

The tone deaf nature of the administration from day one was disgusting.  Bully Boy Bush was rightly called out in 2005 for various galas while the Iraq War and Afghanistan War continued.  In January 2009, backed with a ton of corporation money, DC looked like a whore's paradise and had one longterm DC doyenne observing she hadn't seen anything like this -- corruption and corporations mingling on the dance floors at glitzy galas -- since Nixon.

Two wars were going on but it was party-party central.  And maturity and perspective, which were no where in sight, never arrived.  Which is how you got date nights.  And fashionista covers while millions of Americans moved into poverty.  It was tone deaf.

And the endless rounds of golf and basketball games, the personal sessions with the trainer flown in several times a week from Chicago, the 'body man' Reggie Love, all of it was topped when Michelle decided she and her pals needed a little vaction.

And that's how Barack kicked off the debates.  Instead of focusing on America, he yet again -- as he always does -- tried to make it about him.


Cedric and Wally long ago dubbed him the celebrity president and that's certainly how Barack tried to self-present at the start of the debate.

He even got a round of polite chuckles for that nonsense but you could feel the discomfort as it called to mind, for many, that if a president's not putting his job first right now, when does he ever?

And hasn't that been the underbelly of his administration?  The doubt that he really wants to do the work required?

He won't work Congress.  Forget LBJ who was a master at working Congress, he won't even work Congress the way Bill Clinton did.  (Bill is a natural politician.  He needed a great deal of help grasping the ins-and-outs of Congress and protocol which is partly why his first months included so many stumbles.  By contrast, LBJ knew everything there was to know.)

And it wasn't just that he wouldn't work Congress, he didn't seem to care.  Shutting then-House Speaker Nancy Pelosi out of the process of several key pieces of legislation?  When the Speaker's from your party, you certainly don't try to insult her.

But they never cared.  A beer summit?  Sure, Barack was up to that.  It would get a lot of easy press.   But working Congress?

Could he have recovered?

He could have improved.

He could have tried to connect.

But he came off distracted and distant.

And, worst of all, controlling.

"Jim, you may want to move onto another topic," Barack said coming off both bossy and whiny.

"Let me just finish this  point because you're looking for contrasts," Barack declared at another point as if  his long, rambling responses were caused by Lehrer and not by Barack's own inability to be concise and convincing.


Moments like these -- and there were many -- also touched on the bitchy.

If there was one term for Barack's performance, that was probably it.

And it's why even the die-hards who still make up the Cult of St. Barack couldn't convincingly pull off the lie that he won.  (CNN and ORC International's poll found 67% of those watching the debate said Mitt won).  It was a Barack that they had never acknowledged existed.  But there was no denying it as Barack repeatedly used his time to tell America (lecture?) what Mitt Romney allegedly stood for.

"Who is this Barack Obama?" America seemed to wonder as they finally grasped just how far down the toilet hope and change had gone.

NPR tried hard to spin for Barack.  This morning, on the hourly news, they included a luke-warm critique of Mitt from a political analyst who was supposed to be independent and chose to pair that with someone who was voting for Barack, someone they said had decided to vote for Barack before the debate, who was then given time to tell the world how "scary" Mitt Romney was.  Repeatedly using the term "scary."  The voter didn't belong on the hourly newscast.  It was as embarrassing as the little stunt Scott Horsley and others have been pulling on air that no one's supposed to notice.

Have you noticed how the two candidates are referred to by Horsley?

Take any report.  Let's go to Monday's Morning Edition report.  It's "Romney" and "Mr. Romney" versus "the president," "President Obama," etc.  Now we're not big on titles.  But if you're going to use them, you use them.  In the past, Romney would have been referred to as "Governor Romney" and "the former governor."

Most of the press has shirked any and all standards of professionalism during this election cycle and that's probably another reason Mitt won the debate last night.


They have made him into such a devil that I think a lot of Americans were like me when they watched, "What the hell?"

I was expecting Mitt to kill someone in the middle of the debate and then tie Barack to the railroad tracks.

When you inflate someone to be so evil, I guess there's always the risk that they'll be seen by people who will then realize you lied.

In other words, when you try to turn someone into a monster, you better hope they reveal themselves to be that or you better keep them off screen like Bruce in Jaws.

* Our cell phones are going back on after this posts.  Yes, Jim we were ignoring you.  We don't want to write this type of piece at Third on Sunday.  So we wrote it this morning.  We're done with it.

* For those who need to know, we are feminists, we are leftists.  We also do not plan to vote in the 2012 elections.  We are sick of the scare tactics.  We are sick of so much.  We applaud Jill Stein's use of the phrase "the politics of fear" and wish she'd use it more often.  She should have known it was a winning strategy when Barack recently tried to co-opt it.

* We have now covered the first debate.  We may or may not cover additional ones.  There's a great deal going on with the media and we're not masochists.