Reuters slants it for Nouri 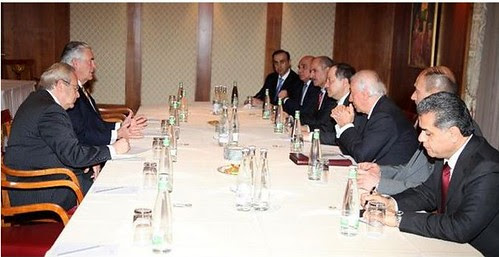 The Kurdistan Regional Government notes a meeting (photo above) in Davos, Switzerland yesterday where KRG President Massoud Barzani and ExxonMobil CEO Rex Pilarson addressed oil exploration in the KRG.  (Before Barzani arrived in Switzerland, he stopped in Germany where he visited the hospital where Iraqi President Jalal Talabani is being treated and he states Jalal's status has greatly improved.)  Barzani was in Switzerland for the World Economic Conference.  This follows Pilarson's meeting with Nouri al-Maliki this week to address ExxonMobil's plans in Iraq.


"Baghdad wants to lure Exxon in. Will they bite?" said one oil industry source.
Another Western oil executive from a company involved in the south said Exxon would likely need to see improved conditions on its West Qurna deal to stay in the south.
Any change in Exxon's position would be a major win in favour of Baghdad in the bitter dispute over oil between Iraq's government and Kurdistan that is straining Iraq's uneasy federal unity.

Really?  Any change?  Would be a win for Baghdad?

Is Reuters trying to stack the deck?  It's certainly not reporting.

What Nouri's Baghdad-based government wants is for ExxonMobil to end the deal with the KRG.  If that happens, you could call that a win for Nouri.  However, if -- and this seems far more likely knowing ExxonMobil -- Pilarson manages to have ExxonMobil exploring in the KRG (keeping those contracts) and to keep the West Qurna deal, the only 'win' there is for ExxonMobil.

That's not a win for Nouri.  ExxonMobil, Reuters should damn well remember, was more than happy to be in that position as 2011 came to a close.  What changed?  When Nouri started stamping his foot and saying the oil giant couldn't have both and would have to choose.

So, no, any change in Exxon's posision is not a major win for Baghdad.  That's a faulty assessment and it's so ignorant that it goes to reporting bias that we've always seen from Retuers with regards to Nouri.  They set up measurements -- that aren't real measurements -- repeatedly to claim that Nouri al-Maliki has somehow pulled ahead.

That's nonsense and it's gone on now for six years.

ExxonMobil getting to keep both contracts is a win for ExxonMobil (and its shareholders).  It would not be a win for Nouri al-Maliki.  Quit spinning and know your damn facts.

The following community sites -- plus the Pacifica Evening News, and the House Veterans Affairs Committee -- updated last night and this morning: