The stain on the left

I'm a glory hog who needs constant fawning and praise.  I have a real problem when it comes to making a decision or taking action.  Therefore, I take a lot of vacations and do very little.  When a problem emerges, I can be found hitting the snooze button repeatedly.  When forced to deal with a problem, I blame others.  What's my name?

Did you guess Barack Obama?  You are correct. 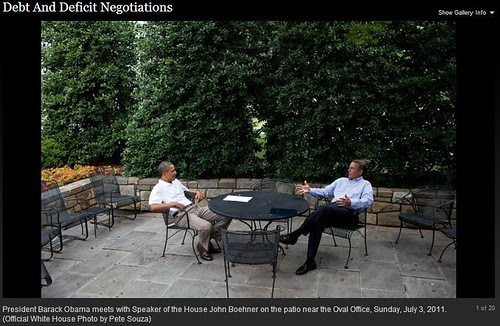 Barack created the sequester -- see him doing just that with Speaker of the House John Boehner on  July 3, 2011?

It was kick the can.  Create a problem for later.


All the alarmist talk today?  People should be asking why it wasn't addressed in the debates?

But when  you've failed to improve the economy, you're going to try to use sequestration as your excuse.

So there's been weeks and weeks of dishonesty where Republicans were blamed for creating it.  And there's been an effort to create a national panic.

Do your damn job.

Sequestration was created on the myth that we must not have deficits.  It's part of a larger attack on the safety net.  Let's be really clear that if Social Security or Medicare take a hit, it's because of Barack Obama.  This is the man who met with the Washington Post in January 2009, before he was sworn in, to talk about how he would go after Social Security.  We covered it in real time.

But we don't whore.  We're not Media Matters.


Veteran journalist Bob Woodward said Wednesday he was threatened by a senior Obama administration official following his reporting on the White House's handling of the forced federal spending cuts set to take effect on Friday. "They're not happy at all," he said on CNN's "The Situation Room," adding that an e-mail from a senior administration official - who he would not name - communicated a message which caused him great concern."It was said very clearly, you will regret doing this," he said.

CNN has confirmation from the White House member who sent the e-mail.  The sender insists it wasn't intended as a threat but doesn't want to be named.  I'm sorry, is the White House a private business or is it supposed to serve the public?  In what world does a public servant get to acknowledge that s/he sent the e-mail but not be named?

In the same world that trash like Eric Boehlert gets to pretend he's some sort of a reporter.  Eric Boehlert is nothing but a blowhard paid by George Soros and others to lie and whore in public.  So he went on the always ridiculous Current TV to be seen by no one but the media and attack Bob Woodward.  (Marcia addressed Boehlert last night, be sure to read her.)

And, because it's Media Matters, the same trash that was the American Spectator in the 90s, all the usual media whores are out in force.  Ben Smith?  Go read Ann to get a chuckle on Benny Smith, the Media Matters megaphone.  The ridiculous Alex Pareene is enlisted in the nonsense as well -- but what is Salon but nonsense?  Where there is a reach around, there is David Weigel.  After being fired from the Washington Post, Weigel probably shouldn't be writing about anything to do with the Washington Post due to a serious conflict of interest.

I'm defending Bob Woodward.  Unlike today's trash -- Smith, Weigel and Pareene -- I've carried my criticism of Bob Woodward to his face.  We had a very loud exchange (screaming on my part, I'm not going to pretend otherwise -- and I included every word -- yelled every word -- that I cannot use here because this is a work-safe website)  immediately after Wired was published.  That wasn't our first encounter, it wasn't our last.

I have no problem offering negative criticism of Bob or positive if he's earned it.

What's happening right now is that Media Matters -- the Ann Coulter of the faux left --  is doing what it always does: Whore.

I've said this for years now: We didn't need to become the right-wing.   We needed to get our ideas out.  Our ideas -- not some politicians talking points.

It is so deeply embarrassing to watch the left (or 'left') whore day after day, grown adults who are the most servile and disgusting creatures.

But David Brock got embraced by the left and we've been damned ever since.

David Brock is probably not a bad person.

In the 90s, when Bill Clinton was president, Brock worked for the American Spectator and worked with various right wingers to promote lies and ridiculous attacks on Bill and Hillary and others who interfered with his limited understanding of the world.  He went after Anita Hill most infamously.

He and his crowd -- Ann Coulter and the other blond women (Ted Olson's late wife and I forget the other one) -- used lies and used the press to attack, attack, attack every damn day.

That was nothing to admire and we were disgusted -- or at least pretended to be -- with that during the 90s.

David Brock got to a point where he could no longer live with himself.

He 'confessed' to Esquire and then in book form because why should St. Augstine be the only hypocrite with book sales?

And he got welcomed by the left.

And he founded Media Matters which was supposed to be so many things but ended up being exactly like what he'd done on the right.  But now he was doing it for the left!

A word on the converts -- David Wiegel boosters especially pay attention -- real exploration needs to be done or someone who switches sides just brings their toxic point of view over to the other side and pollutes it.

Brock should not have been made a leader of anything -- for any political side.  He should have spent his time examing what he did -- not to write a book -- and learning from it.  Then he might have had something to offer.

Instead he's just recreated on the left what he did on the right.  And it's cheapened us on the left.


The e-mail that was sent to Bob Woodward is offensive.  It should not have been worded that way.  If the person who sent it wants to claim it wasn't intended that way, then that public servant whose salary is paid by the US taxpayer needs to step forward and publicly answers questions on the issue.

Outlets need to look very closely at the people they have 'working' for them.  The circle jerk should have stopped a long time ago.  Real editors would demand that that happen.  Real editors would state very clearly, "We're not paying you to spit out what your friends at ____ want you to.  You're working for us and our name and our image means something so you can't work for us and whore, you'll have to make a choice."

Were I, for example, ABC News, I would be asking Devin Dwyer about who he chose to quote.  It's certainly interesting that he went with dismissals of Woodward.  You'd think a trained journalist would speak to a journalism professor, an ombudsperson, someone of merit -- as opposed to just quoting administration flunkies (which includes Ben Smith).

As a general rule, your first clue that you're looking at a press whore is when  the media may be targeted by politicians and, instead of exploring that, a 'journalist' rushes to insist no such thing happened.

Unlike press whores, real journalists are concerned over any threats to a free press.  The White House -- any administration, any politician -- telling a reporter "you will regret this" is a threat. Bob Woodward took it as a threat because that's how it was intended.  It has to do with who holds the power.  It was intimidation.  Was it intended to be that way?  Only one person can make that case and they choose not to do so.

I hadn't planned on weighing in on this.  It was so obvious, to me, that the press needed to respond with a powerful pushback.  But I forgot just how many whores hide among the press.  And here's the link to Bob's column that so enraged the White House.

If it's not clear to you why Bob is being attacked, let's make it real clear.  The White House wants sequestration to insulate Barack.  They want to pin it on the Republicans and blame them.  That's if it kicks in, that's if it's replaced by something else.  This is about the administration doing what all administration's do, spin and lie.  I.F. Stone, "All governments lie."

And all steongraphers rush to cover for them.  That's what Media Matters is, that's all it is.  It's nothing for the left to be proud of.

Senator Patty Murray is the Chair of the Senate Budget Committee.  Yesterday, she received a well earned honor.

WASHINGTON, D.C. – Today, U.S. Senator Patty Murray (D-WA) was presented the Inspirational Leadership Award by the Military Order of the Purple Heart (MOPH) during a private ceremony in her Capitol Hill offices. MOPH National Commander Bruce McKenty presented this year’s award to Senator Murray which read:
“Since being elected to the Senate in 1992, Senator Patty Murray has consistently served as an advocate for veterans, military members and their families.
“Having been raised in the family of a disabled World War II veteran, she came to the Senate fully understanding the sacrifices, as well as the physical and emotional scars the veterans bring home with them.
“Senator Murray was the first female Senator to serve on the Senate Veterans’ Affairs Committee and serves as its Chair in the 112th Congress. She has consistently been a tireless advocate for all veterans.
“She led the battle for increased funding for veterans’ healthcare and increased benefits, and profoundly recognized the importance of specialized programs for veterans suffering from TBI and PTSD.
“Senator Murray continues to support education and employment opportunities, better health care for women veterans and a myriad of other programs that she believes America owes its veterans.
“Senator Murray’s service reflects great credit upon herself, the United States Senate and the United States of America.”
The organization now known as the "Military Order of the Purple Heart of the U.S.A. Inc.," was formed in 1932 for the protection and mutual interest of all who have received the decoration. Chartered by the Congress, The MOPH is unique among Veteran Service Organizations in that all its members were wounded in combat. For this sacrifice, they were awarded the Purple Heart Medal.
Click here to download high resolution photo.
###