Whatever your own personal pet assumption may be, elements of the media are all over a report -- or what they were told of a report -- by the Special Inspector General for Iraq Reconstruction.

I'm not seeing any real quotes on the report, seeing a lot from Stuart Bowen who is the Special Inspector General for Iraq Reconstruction.

You can read Tony Capaccio (Bloomberg News),  Spencer Ackerman (Wired), Barbara Slavin (Al-Monitor) or anyone else.  Those are the strong reports.

But they miss the important detail, the detail that goes to an issue bigger than Iraq.

Let's read the report right now, or the most important page, the cover. 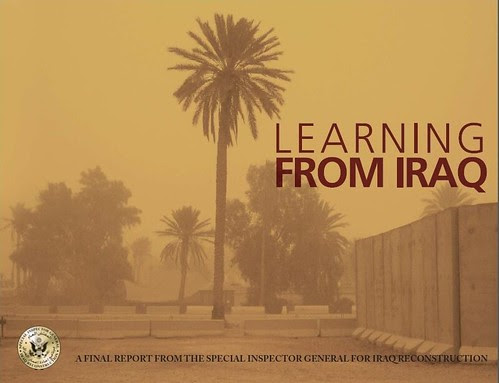 You see that line at the very bottom?  "A FINAL REPORT FROM THE SPECIAL INSPECTOR GENERAL FOR IRAQ RECONSTRUCTION."

That's important because Bowen doesn't believe the office should be closed.  It's important because the White House -- which is spending billions in Iraq still, via the State Dept -- does not want the SIGIR to remain open.  The State Dept refused to brief SIGIR on what they would be doing with regards to the billions.  The most recent training of Iraqi police is a failed effort and that's a failed State Dept effort.  That failure includes handing over the training building that US dollars built -- the highly secure, highly costly building.  That includes putting billions into a program that Iraqis did not want.

Stuart Bowen:  I testified before this subcommittee in November 2011 about our
concerns regarding the Department of State's planned multi-year, multi-billion-dollar
Police Development Program [PDP].  I raised two overarching issues that threatened
the PDP's success.  First, the Defense Department had not adequately assessed the
impact of its own six-year police training efforts, and thus a key benchmark for
future planning was missing.  And second, State had not sufficiently planned for the
program, either on the policy or logistical fronts.  It is now beyond dispute that the
PDP planning process was insufficient.  It should have produced specific program
goals, a time frame for accomplishing those goals, the anticipated total cost for the
program, the expected scope of required resources, and a method for measuring
progress.  The process fell short in each of these areas.  Further, to succeed, the
PDP required close collaboration and support from the Government of Iraq.  But
the GOI's support has been weak, at best.

The White House and the State Dept knew best -- or thought they did.

And they refused to honor oversight.

This is not a one-off but part of the culture of secrecy of Barack's presidency.

This has come up repeatedly in Congressional hearings.

Check the June 29th snapshot for the June 28th House Oversight Subcommittee hearing.  (Bowen quoted in bold above is from that hearing.)

Let's go to another report on a hearing, from the snapshot for December 7, 2011:

Subcommittee Chair Jason Chaffetz:  Before recognizing Ranking Member [John]
Tierney, I'd like to note that the Defense Dept, State Dept, USAID and SIGIR will not
have IGs in January.  In May of this year, I wrote the President asking him to move
without delay to appoint replacements.  That letter was signed by Senators [Joe]
Lieberman, [Susan] Collins, [Claire] McCaskill and [Rob] Portman, as well as [House
Oversight Committee] Chairman [Darrell] Issa and Ranking Member [Elijah] Cummings
and Ranking Member Tierney.  I'd like to place a copy of htis record into the record.
Without objection, so ordered.  To my knowledge, the President has yet to nominate
any of these replacements, nor has he responded to this letter.  I find that totally
unacceptable.  This is a massive, massive effort.  It's going to take some leadership
from the White House.  These jobs cannot and will not be done if the president fails
to make these appointments.  Upon taking office, President Obama promised that his administration would be "the most open and transparent in history." You cannot
achieve transparency without inspectors general.  Again, I urge President Obama and
the Senate to nominate and confirm inspectors general to fill these vacancies  and
without delay.

Barack couldn't fill those in his first term and still hasn't.  Couldn't or wouldn't.  At what time does the lack of oversight become an issue.

I'm all for Iraq getting the attention it deserves.  Obviously.  But the news today is that the SIGIR has issued its final report.  The US government is still spending taxpayer money in Iraq.  It will now be doing so with no real oversight.

It's a crooked administration and it will remain one until IGs are appointed.

(Washington, D.C.) – Today, U.S. Senator Patty Murray commended legislation introduced by Representatives Rick Larsen (D-WA) and Steve Stivers (R-OH) that ends the ban on in vitro fertilization (IVF) services at VA and provides access to fertility treatment, adoption services, and other care in order to help severely wounded veterans start families. The House bill, the Women Veterans and Other Health Care Improvements Act of 2013, is the companion legislation to the first bill Sen. Murray introduced in the 113th Congress.
“Providing fertility services is a cost of war and part of the commitment we make to care for our servicemembers and veterans when they return home,” said Senator Murray. “So I applaud the bipartisan effort on this critical legislation by Congressmen Larsen and Stivers. I hope the House will act quickly to help our most seriously wounded veterans, and their spouses. We should not make these veterans, who have sacrificed so much, wait any longer to be able to realize their dreams of starting or expanding their families. We owe them nothing less.”
Late last year, during the 112th Congress, Senator Murray was able to unanimously pass the bill through the U.S. Senate after delivering an impassioned speech on the Senate floor that described the challenges veterans and their families face in accessing IVF. Unfortunately, the bill failed to move in the House of Representatives in time to make its way to the President’s desk after Republican leaders there expressed opposition.
###
---
Meghan Roh
Press Secretary | New Media Director
Office of U.S. Senator Patty Murray
Mobile: (202) 365-1235
Office: (202) 224-2834
@PattyMurray | @SenateBudget | @MegRoh