Did a military witness lie at Kim Rivera's court-martial? 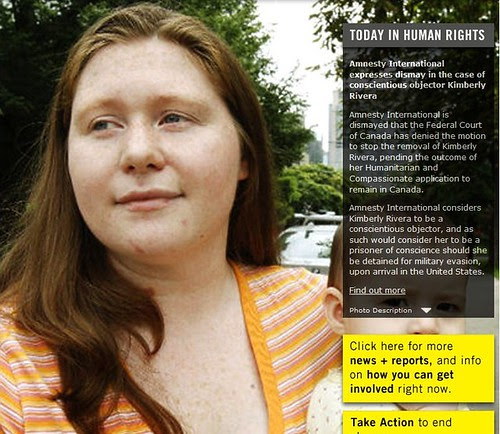 Yesterday, Iraq War veteran Kim Rivera (above with son Gabriel from Amnesty International's website) faced a court-martial in Colorado.  The war resister self-checked out and went to Canada with her family (husband and two children then; she's now a mother of four) when she couldn't continue to participate in the illegal war. War Resisters Support Campaign announced yesterday Kim "was sentenced to 14 months in military prison and a dishonourable discharge after publicly expressing her conscientious objection to the Iraq War while in Canada.  A pre-trial agreement capped the sentence at 10 months of confinement and a bad conduct discharge."
Erin Prater (Colorado Springs Gazette) reports on the court-martial.

Prater notes Rivera testified she intended to remain in Canada and that 14 anti-war activists were present for support with one, Nadine Jackson, testifying on behalf of Kim.

Staff Sgt Amelia Nelson, if she testified as Prater states, lied to the court.  Kim's blog was not about the Iraq War.  Kim's blog?

We quoted from it at least twice.  I read every post seeing if there was something we could use.

Kim's blog was that a home maker. There's nothing wrong with that but Nelson's portrayal of it is incredibly false.  Kim shared recipes, wrote about cooking and raising children and, most of all, wrote about her religion (Christianity).

Kim made many comments against the war in interviews and speeches but her blog was not a radical blog. There were entries that not only didn't apply here but I would never have quoted because they were deeply (religiously) conservative.  I don't take orders from any man, never have and never will.  I hope I'm conveying the sort of topics Kim was writing about.  That's her right to live the life she wants, I'm not slamming her, but the idea that a woman must follow 'orders' from her husband is not anything I would ever endorse.

Those are the topics Kim covered. Her religion, how it effected her marriage, how she tried to sublimate and the occasional recipe and food talk.

My point here is that Staff Sgt Amelia Nelson, according to Prater, lied, "After fleeing to Canada with her family, Rivera began voicing anti-war sentiments via a blog that was discovered by her comrades in Iraq, Staff Staff Sgt. Amelia Nelson, a former co-worker of Rivera, said in court on Monday."  Kim was also in Canada for a year before she started that blog.  She gave her first press interview in early March 2007 when they arrived in Toronto.

I have no idea if Prater's wrong in her reporting or not.  But as she conveys it, Amelia Nelson lied.  If Prater got it wrong, there's an e-mail address at the bottom of this post and Amelia Nelson's a grown up who presumably has computer access if she wants to clarify the story.

Very few war resisters have had blogs.  When Kim goes to Canada, you're also dealing with the fact that the US government is now openly spying on the war resisters and attempting to seize them.  Kim's arrival in Canada coincides with the efforts of the US government to track war resister Kyle Snyder who was, at that time, briefly in the US. Kyle of course would be targeted while in Canada as well and US forces would cross the border in an effort to illegally seize him.

Kim's blog was called -- I feel like I shouldn't say it.  I feel like we should instead be asking 'expert' Amelia Nelson what the title was.  I know the title.  It wasn't an anti-war title or a title that would make you think you were going to a site that would even mention the Iraq War.

If Prater's reporting is correct, Nelson lied in court.

If you're not getting how religious Kim is, the young woman's not even 31.  She's the mother of four.  Prater reports that she's expecting her fifth child in December.

That's right, Barack Obama oversaw the court-martial of a pregnant woman.  If she's not given credit for any of the time already in custody (since September), then she'll be delivery her fifth child in prison.

Kim has a strong belief that God will provide and take care and hopefully that will be the case for her.  (And good for her and her strong faith.)  But that was the point of her blog.  She wasn't doing entries on Iraq and for the military to imply or lie otherwise?  That's really sad.


Kim did a heroic thing and she stood tall even in the military court.  The military, based on Prater's reporting, by contrast, cheapened and sullied themselves in such a way that it sounds like some more courts-martial might be necessary.

The Daily Mail covers the court-martial here.  If Prater's account is correct regarding Nelson's assertions, the military prosecution should have been aware of that so they too decided to lie.  That's a pretty serious betrayal that the military isn't supposed to take lightly.  The best thing for the military would be for Prater to have misreported.


The following community sites -- plus Chocolate City, Jody Watley, Antiwar.com, the ACLU, the House Veterans Affairs Committee, The NewsHour, Susan's On the Edge and the ACLU --  updated last night and this morning:

The hearing previously scheduled for May 8, 2013 has been moved, updated details below:

There will be a meeting of the Committee on Veterans’ Affairs in room SR-418, Russell Senate Office Building, on Thursday, May 9, 2013, at 10:00 a.m. to conduct a hearing titled “Pending Health Care Legislation”.