Time for Nouri to go as Iraq is 'plunged into violence' 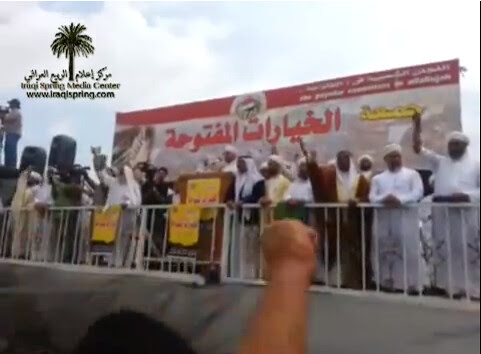 It's Friday, which means protests take place in Iraq.  It's Friday, which means protesters get harassed and targeted by Nouri's forces.  The screen snap above is Falluja today from Iraqi Spring MC.  Protests took place in many locations including Mosul, Samarra (where Nouri had aircraft providing surveillance), Tikrit (where Nouri's forces -- like Americans in Abu Ghraib prison -- used dogs to 'assist' them, where protesters called for a unified Iraq, and decried attempts by the government to suppress the media), and Jalawla (where Nouri's forces closed roads in an attempt to stop the protests and then closed entrances to the square).

And Nouri appears to have been successful in threatening the press.  That's what the 'closure' notices were about, silencing the media, cowing them.  The way you respond to a thug like Nouri is not by refusing to cover the protests, it's by increasing the coverage of the protests.  Iraqi media has stood alone in truly covering these protests.  The western media played it safe and offered excuses ('I was stopped at a checkpoint!' -- as if they didn't know enough to be in a square before the checkpoints were set up).  Now it will be interesting to see whether the thug gets his way.  It's a real shame that the western media can't step up to the plate and give the Iraqi media the support they need but the only real bravery in the media covering Iraq has been Iraq's homegrown media.


Struan Stevenson heads the European Parliament's Delegation for Relations with Iraq.  He writes a column for UPI which notes:

Angered at critics in the press who have highlighted the spiraling violence and human rights abuse in Iraq, Maliki has banned al-Jazeera and nine Iraqi TV channels, eight of which are Sunni. Without licenses, news crews from the banned channels will be arrested if they attempt to operate in Iraq. Iraq's descent into another sectarian civil war, prompted by Maliki's determined efforts to marginalize the Sunni population, has become an embarrassment to the United States, which regard the Iraqi prime minister as their adopted son. U.S. State Department assertions that they were leaving behind a "functioning democracy," following the withdrawal of American troops from Iraq, now have a hollow ring. Mass demonstrations against Maliki have been going on in six of Iraq's provinces and most of the major cities for the past four months. Hundreds of thousands of protesters are pouring onto the streets, particularly following Friday prayers, to demand an end to sectarian oppression, human rights abuse and arbitrary executions.

The pass the world press has given Nouri repeatedly is appalling.  He's used that pass to continue his attacks on protesters and on the press.  What sort of future will Iraq have if this continues?  If you can't speak the truth without being attacked by Nouri's forces and you can't report the truth without being shut down by Nouri's forces, what kind of future does that leave?


Nussaibah Younis makes the case "Why Maliki must go" in a column for the New York Times which concludes:


If all of these countries could persuade Mr. Maliki to resign, it would give moderate Sunnis a symbolic victory and dampen extremist influence in their community. That, in turn, could show all Iraqis that change can be achieved through politics, rather than war.
Iraq’s parliamentary democracy could survive a resignation. It is normal for a prime minister to step down and be replaced by another figure elected by Parliament. There are other capable Shiite politicians who could recruit and lead a national-unity government.
A decade after Saddam Hussein’s fall, violence threatens to overwhelm Iraq. Getting Iran, Saudi Arabia, Qatar and Turkey to cooperate with the United States on a new political bargain there, with Mr. Maliki out of the picture, won’t be easy, but it’s essential to save Iraq.


Nouri can't provide anything.  There are said to be fuel shortages (for generators) in Baghdad.  Oil-rich Iraq with fuel shortages?  Electricity is still not fixed, all these years later.  Anytime heavy rains are forecast, various areas of Iraq have to worry about flooding because Nouri's failed in his seven years as prime minister to fix the sewage system.  Iraqis still aren't guaranteed potable (safe drinking) water.  He's accomplished nothing including failing to provide security.

Yesterday, Mohammed Tawfeeq (CNN) reported the United Nations have released their figures for the month of April: 712 people killed in violence and 1,633 left injured.  Basing it on their own figures, the UN declares last month to have been the most deadly in Iraq in five years.

Prensa Latina sees Iraq today "plunged into violence."  Alsumaria notes a Baghdad grenade attack on an alcoholic store in which 3 people died and two more were left injured and a bombing inside a northern Baghdad mosque has claimed 3 lives and left twenty-eight injured.  All Iraq News reports it was near the mosque and that the death toll has risen to five and there are thirty injured.  Xinhua adds, "Meanwhile, a total of nine policemen were killed and six others wounded in clashes between armed men and police in Mosul, some 400 km northwest of Baghdad, a local police source told Xinhua."