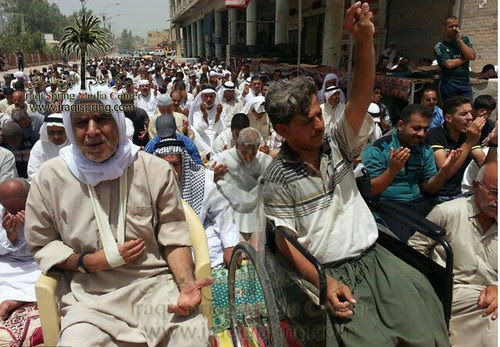 Friday in Iraq means protests.  Has since December 21st.  Above is the turnout in Baquba and the spokesperson for those with special needs states, "Disability will not keep us from rejecting injustice, tyranny and government repression."  Iraqi Spring MC also notes that the people turned out in Baghdad and in Ramadi.  National Iraq News Agency reports, "Thousands of citizens flocked since early hours of the day from from different parts and cities of Anbar Province to sit-ins of Falluja and Ramadi, to participate in Friday unified prayer."  NINA also notes police were deployed and set up checkpoints in Falluja and Ramadi, imposing "tight security measures in the sit-ins squares."  Iraqi Spring MC reports that Nouri's forces surrounded the platform at the Baquba sit-in in an attempt to frighten the protesters.  NINA notes that in Samarra, Imam Diab Hamid called on the security forces to stop using security forces against the people and the Imam told the demonstrators that "several weeks ago you voted to replace UN representative in Iraq, Martin Kobler, and now the oppressor has been relieved of his post" (UN Secretary-General announced this week Kobler will be moving onto the Congo).  The Imam congratulated the protesters on their peaceful accomplishments.  In Diyala the call was to preserve the unity and security.   In Balad Ruz, there was the call to continue the peaceful sit-ins.  In addition, Kitabat reports that in Ramadi there is a call for Nouri al-Maliki to come to the sit-in and dialogue with the protesters.


On the topic of Martin Kobler, As Sheik (Dar Addustour) has a column noting the many accusations of bias that dogged Kobler and how he was suposed to be neutral but was instead seen as turning a blind eye on the human rights  violations of the Iraqi government.  He notes one of Kobler's biggest failures is that the United Nations (and its representatives) are supposed to exist to help the world's people, not the governments, and that the people suffered in Iraq from Kobler's poor performance.


That Barham Ahmed Salih is angling for the job of Iraqi President and that he's met with Nouri al-Maliki to discuss it.  Salih is a member of Jalal Talbanai's PUK party but he's allegedly doing this without the backing of the PUK and it's hush-hush.  Nouri supposedly floated the idea to KRG President Massoud Barzani in their Sunday meeting and Barzani supposedly responded that Talabani was on the mend and due to be back in Iraq shortly.  After Barzani supposedly refused to take the bait, Salih and Nouri became more determined.  Those believing this rumor tend to believe Hero Ibrahim Ahmed (First Lady of Iraq) will use the party her husband controls (PUK) to discipline Salih and, if it doesn't appear that makes him re-think his plans, Hero will announce herself as a contender to keep the post in the family.

An e-mail to the public account asks why I haven't defended Glenn Greenwald? The e-mailer argues it's because I don't like Glenn so I won't give him his due.

I don't like Glenn.  But go read the post I did filling in for Ann last week, I did give him his due.  If he is being attacked -- by anyone other than 'wacky' Peter King -- please advise me on that and we will defend him.

I don't care for Glenn.  That doesn't mean I wouldn't defend him on this.  I've already praised him for this.  It really is hilarious how people think I'm just praising my friends and trashing my enemies here.  For example, it's pretty well known, if you've been reading for a few years, that  a certain member of the press made a 'forceful pass' (attempted rape) on me years ago.  I've defended his work here.  When he went on my local radio station in the Bay Area to trash me and all my friends called and said, "That would-be rapist piece of s**t," I just ignored it.  Now days, as he's at a university, while still remaining quiet online, I did make a point to meet with his dean and inform him of the attempted rape just in case any female student comes forward.  If she does, I'll be happy to go public, and on any network, and talk about the creep's assault on me.  If you can't tell, I hate that man.  (I should note, he didn't expect women to fight back and, like way too many, he assumed I was meek and fragile.  I was left with a slightly torn dress.  He was left with injuries and bleeding.)

With Glenn, I just don't care for him but I don't hate him.  And I did give him his due last week and, if he's attacked for his scoop, I will defend him from those attacks.  He did a great job and showed up everyone last week.  I have no problem saying that (and I said it at Ann's site last week).  And, during a better (easier) week, I would have noted already that Ann's back to blogging.  Yea!  And congratulations to her and Cedric on their beautiful baby boy.

Stop assuming that I play favorites.  If you heard of the some of the blistering phone calls I get about what goes up here, you'd know I'm not playing favorites.

Congressman James Clyburn is supposed to represent the interests of more than half a million South Carolinians, the majority of them Black. One might expect a Black congressman to have more than a passing interest in the Bill of Rights and protection of civil liberties. The revelation that Uncle Sam is building up a dossier on everyone with a telephone and a computer connection should be at least mildly upsetting to anyone that calls himself a Black leader. But Congressman Clyburn has but one priority: to protect the image and legacy of Barack Obama.
Rather than thank whistleblower Edward Snowden for revealing the massive scope of government spying under Obama, Congressman Clyburn sees a conspiracy against the president. Otherwise, how could a 30-year-old white boy who dropped out of high school get in a position to blow the whistle on the Obama administration. “I haven’t gotten to where I am in politics without relying on my gut,” said Clyburn. “And my gut tells me this is an effort to embarrass the president.”