I praised his 2008 release Sleep Through The Static.  I passed on reviewing 2005's In Between Dreams and 2010's To The Sea.  As I've noted before, Jack's usually good for at least one memorable track an album.    On To The Sea, that track was "At Or With Me."

Or at least the video of it with him and Andy Samberg brawling at a comedy club.  That was hilarious and added layers to the song that weren't otherwise there.  Of course, last week's real life copy-cat incident, which found comedian Dan Nainan leaving the stage at a club to physically attack journalist Josh Rogin, demonstrated you should leave those stunts to comedic send-ups by f**king mellow man.

And sometimes Jack Johnson can be just a little too mellow for me, a little too laid back, a little too wishy-washy.  As my friend Maggie says, "Face it, he's Josh on Will &  Grace and we're all Karen telling Grace to dump him."

But  there is that scene when Josh surprises everyone by exploding at Karen ("You, a woman who thinks an act of kindness is letting her step-kid have the fruit out of her whiskey sour!")  for telling Grace to withhold sex and at Grace for "taking that advice."  At the end of his emotional "take me as I am" speech both Grace and Karen want him.

And it's a trick Jack can pull off too every now and then. 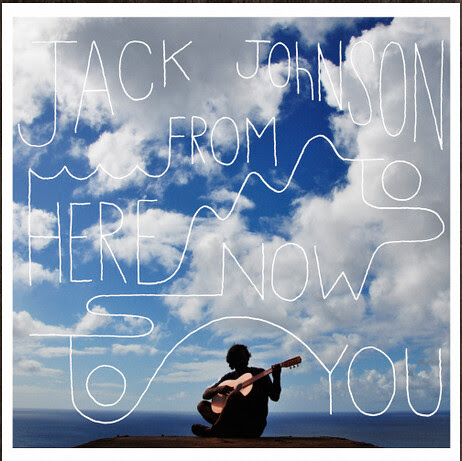 From Here To Now To You is his new album that came out this month.  The second track really works for me.  It didn't when I saw the title.  "Washing Dishes."

'Oh, good Lord,' I thought, 'either he's singing about being domesticated or he's pulling a Paul Anka move with a she's-having-my-baby-what-a-beautiful-way-to-say-you-love-me.'

And I couldn't figure our which was more insulting.

Fortunately, that's not the song he wrote.

But I wonder if he wrote the song I'm enjoying?


His song is first person, a guy attracted to a woman and she sees him washing dishes and tending bar somewhere and he's going on about how he's going to own this bar someday, wait and see.

Of course, he's not going to.

Not in this economy, for sure.  And -- be honest, ladies -- haven't we heard that nonsense from every other man who's ever come on to us?

My own personal low was hearing it from a bartender at 23 and going to bed with him.  His name was Patrick.  After that encounter, his name became:  One Thurst Patrick.  And he had the nerve to roll off me and act like what just happened was normal and acceptable.

In the morning when the world came awake
Before you knew me I knew your name
It was painted across the day as it breaks
An impression in your window frame
When you saw me out your window
Singing from the garden
Only the beginning
I'm only getting started
I don't mind the digging
Baby, I'll work hard
I've been washing dishes
Singing from the bottom
But one day I'll be running this place
And one day I could take you away


If every man who'd made that boast as a pick up line had succeeded, the 99% would be the wealthy Americans and not those screwed over by a corrupt government which bails out crooked banks and not home owners in need.

To be clear, in this lousy economy, a man nearing forty (Jack's 38) with a job is a nice surprise and washing dishes isn't armed robbery.  So the guy's not a 'loser' or someone I would avoid.

If a guy who looked like Jack Johnson offered me those pick up lines and a drink, yeah, we'd be heading back to my place.

But I would also be thinking, "He's so cute for believing his dreams are going to come true."

Because they're most likely not.

And listening to the song, I get that.

But listening to the song, I wonder if Jack does?

Fortunately, the album answers that question with confidence.


"Tape Deck" finds him singing, "We sounded folk but we wanted to be punk/ In a world post-punk."  "As I Was Saying" finds Jack at his most nakedly honest and, yes, that is attractive.  He sings about failed assumptions, failures of his own.  In "Ones and Zeros," he sings of how, "So we're clapping and we're laughing like it was so absurd/ In the future we'll be laughing at who we were right now/  As man plays god with the land that he plunders."

"Washing Dishes" is one of twelve tracks.  (More tracks if you go to Target -- online or in store -- for the album.)

"Shot, reverse shot, look what the other got."  I love that song.  I love the rhythm.  I love singing along.  Most of all, I love the fact that Jack seems aware of the world around him.  That's what made Sleep Through The Static such a breakthrough.

Jack had long been a tall, good looking man with a sexy voice.  His guitar playing was inventive and his melodies often surprising.  But all those goods (as impressive as they were) were too often used on songs that appeared to have half the depth of Jan and Dean.  It was a text book example of squandering gifts.

Sadly, his 2010 follow up to Sleep Through The Static showed no growth or even the same level of awareness.

Happily, From Here To Now To You does.

And I haven't even noted the best track.  "I Got You."  It's confident singing, a slow dance feel and a lot of honesty.


I'm sorry, but that song sounds like it was composed this decade.  Few of Jack Johnson's singer-songwriter peers can make the same claim.

They seem oblivious to the world that so many Americans are living in, paycheck to paycheck -- if they're fortunate enough to have some crappy job in this economy.  People are struggling and the government doesn't care and the news media is forever trying to find 'good news' in the still record high unemployment.

As John Cassidy noted this month at The New Yorker, 9.7% is the actual unemployment rate currently.  That is unacceptable.  And people across the country wonder where the jobs are.  (And the jobs being created tend to be part-time jobs.)

On From Here To Now To You, Jack's singing about love and life and goals.  And the melodic songs work because they are rooted in the world we live in.  And, let's be honest, that's what we find sexy in a man:  Awareness.   Hell, I might have even forgiven One Thrust Patrick if he'd shown a little awareness of what had just happened in bed.  This release is Jack Johnson's best album so far and it might just be the best album of the year.

jack johnson
from here to now to you
the new yorker
john cassidy
kats korner
the common ills
Posted by Common Ills at 2:20 PM