Monday, June 9, 2014.  Chaos and violence continue, Nouri expands his assault on Sunnis to Nineveh Province,  the Moqtada al-Sadr movement does not want a third term for Nouri, in the US the VA releases the results of an audit, and much more.

WASHINGTON – A coalition of women’s rights groups have joined the Feminist Majority Foundation (FMF) in calling for the Obama Administration to initiate the process of removing Brunei from negotiations on a prospective Trans-Pacific Partnership (TPP) agreement with the United States – or to suspend TPP talks – until Brunei revokes its new Taliban-like penal code.

“Women’s rights and human rights cannot take a backseat to profit and trade,” said FMF President Eleanor Smeal. “As a global leader, the United States should not negotiate a free trade agreement with a country that has enacted laws hostile to basic human rights and dignity.”

The Trans-Pacific Partnership is a proposed regional free trade agreement being negotiated between the U.S. and Australia, Brunei, Canada, Chile, Japan, Malaysia, Mexico, New Zealand, Peru, Singapore, and Vietnam. The TPP addresses a broad range of issues, including trade in goods and services; regulation of intellectual property and foreign investments; as well as labor and environmental rules, among other topics. TPP negotiations have been ongoing since 2010, with very little information about the negotiated documents released to Congress or to the public.

“The U.S. must insist that Brunei address human rights concerns by revoking its penal code before the U.S. continues negotiations with Brunei on the TPP,” continued Smeal. “There is simply no place in a civilized society for kill-a-gay and flog-a-woman penal codes. Our foreign policy should make that clear, especially in the execution of our trade agreements.”

The Office of the United Nations High Commissioner on Human Rights has expressed deep concern about Brunei’s new penal code and stated that its draconian punishments would violate international law. The new penal code, which went into effect on May 1, is set to be implemented in three phases. The first phase includes fines and prison sentences for such “crimes” as becoming pregnant outside of marriage. The second phase includes corporal punishment, such as amputations and flogging of women who have abortions. The third phase includes the stoning to death of gay men and lesbians and those convicted of adultery.

FMF has launched a petition drive and social media campaign #StopTheSultan calling on the Sultan of Brunei to revoke the new penal code, and together with Mavis and Jay Leno, held a rally in Los Angeles, California on May 5 across from the Beverly Hills Hotel – part of the Dorchester Collection of properties, owned by the Sultan – to protest the law.


The Project on Government Oversight (POGO), a Washington-based nonprofit that pushes for “good government reforms,” will fight a May 30 subpoena from the inspector general of the Department of Veterans Affairs (VA) seeking the results of its research into mismanagement at the department. “We never have” complied with such a subpoena, says POGO communications director Joe Newman, who says the group has now dealt with seven demands from federal agencies for records since the early 1990s. “And we have no plans to do that.”

CJ Ciaramella (Washington Free Beacon) adds, "POGO, along with the Iraq and Afghanistan Veterans of America, launched a website on May 15 where whistleblowers within the VA could confidentially report problems. According to POGO, roughly 700 people have submitted tips using the site."  Joe Newman, Director of Communications for the Project On Government Oversight, writes a response to the IG subpoena which includes:


POGO, which has a 33-year history of working with whistleblowers to expose government fraud, waste and abuse, wrote the IG today and refused to provide the records, most of which have come from confidential tips submitted through VAOversight.org.
POGO and the Iraq and Afghanistan Veterans of America (IAVA) launched VAOversight.org on May 15 to offer potential whistleblowers a safe channel to confidentially report abuses in the VA healthcare system, which have been the focus of intense media scrutiny and congressional hearings in recent weeks.
Since the website went live, about 700 people have submitted tips or aired grievances. About 25 percent of those tips have come from current or former VA staffers. POGO is reviewing the information it has received and is looking into many of the claims.
In a letter sent to the IG this morning, POGO said the IG’s subpoena infringes on POGO’s constitutional “freedom of speech, freedom of press, and freedom of association rights as they relate to all whistleblowers and sources.”
Some VA employees who contacted POGO and requested confidentiality said they feared retaliation if their names were divulged. Any of them could have reported their concerns to the VA inspector general. In fact, some of the employees told POGO that they had filed reports with the IG. Some people expressed a lack of confidence in the Office of the Inspector General.
“The Inspector General’s demand stands opposed to POGO’s mission and to good government reform—both of which serve the public interest,” POGO Executive Director Danielle Brian said. “Our focus is squarely on investigating the problems in the VA healthcare system and trying to find some solutions.
“Our mission as a public interest watchdog would be severely damaged if we violated the trust of our sources. We have faced these kinds of threats before and have never wavered. We will not violate the trust whistleblowers have placed in us by revealing their identities to anyone.”
POGO’s letter to the VA IG.


Staying with the topic of veterans, it started as rumors and became much more with whistle-blowers coming forward and CNN reporting.  Yes, we're talking about the VA scandal where veterans were kept waiting for weeks and months despite the claims that all veterans were receiving medical appointments within 14 days of requesting them.  Today the Veterans Affairs Department released the Nationwide Access Aduit results. Among the findings?  "Meeting a 14-day wait-time performance target for new appointments was simply not attainable given the ongoing challenge of finding sufficient provider slots to accommodate a growing demand for services.  Imposing this expectation on the field before ascertaining the resources required and its ensuing broad promulgation represent an organizational leadership failure."

Eric Shinseki resigned as Secretary of the VA two weeks ago.  Even then, some rushed to defend him.  The audit found "an organizational leadership failure."  The would be Shinseki's failure, he headed the Department..

Findings indicate that in some cases, pressures were placed on schedulers to utilize inappropriate practices in order to make waiting times (based on desired date, and the waiting lists), appear more favorable.  Such practices are sufficiently pervasive to require VA re-examine its entire performance management system and, in particular, whether current measures and targets for access are realistic or sufficient.


How many sites were cooking the books?

Respondents at 90 clinic sites provided responses indicating they had altered desired dates that had been entered.  In virtually all cases, they indicated they were instructed by supervisors, but many believed the policy of altering dates was coming from facility leadership.  In at least 2 clinics, respondents believed someone else (not a scheduler) was routinely accessing records and changing desired dates in order to improve performance measures.

In response to the report, Acting Secretary of Veterans Affairs Sloan Gibson announced the following steps to be taken:

In response to the report, Iraq and Afghanistan Veterans of America issued the following today:

57,000 Vets Waiting For Appointments, New Vets Infuriated
Audit details how vets across the country wait almost three months for appointments at VA Hospitals
Washington DC (June 9, 2014) – According to a new Department of Veterans Affairs (VA) audit released today, more than 57,000 patients across the country have been waiting almost three months for appointments at VA hospitals and clinics. The audit was released ahead of IAVA CEO and Founder Paul Rieckhoff’s meeting with other leading veterans groups and Acting VA Secretary Sloan Gibson at the VA.
“This audit is absolutely infuriating, and underscores the depth of this scandal,” said Rieckhoff. “Our vets demand action and answers. IAVA again calls on the President to be out-front in reforming the VA and we also encourage members of Congress and the Administration to implement IAVA’s eight-step plan. We would welcome a meeting with the President – the veteran community must hear more from him and be assured that he cares. I look forward to hearing answers from Acting VA Secretary Sloan Gibson this afternoon.”
The audit found that:
• Practices of manipulating wait times were so pervasive, the audit recommended a complete overhaul of VHA's performance management system.
• 13 percent of schedulers - and 76 percent of facilities - reported some improper scheduling practices.
• 8 percent of schedulers - and 70 percent of facilities - used an alternative to the appropriate waiting lists.
Last Monday Rieckhoff, joined by IAVA veterans from across the country, unveiled eight steps the Obama Administration and Congress can take now to restore confidence in the Department of Veterans Affairs. Among the steps are recommendations from IAVA’s 2014 Policy Agenda. IAVA urged Congress and the President to enact all of the recommendations from the plan.
NOTE TO THE MEDIA: IAVA leadership is available for interview. Press can email press@iava.org or call 212-982-9699.
Iraq and Afghanistan Veterans of America (www.IAVA.org) is the nation's first and largest nonpartisan, nonprofit organization representing veterans of Iraq and Afghanistan and has more than 270,000 Member Veterans and civilian supporters nationwide. Celebrating its 10th year anniversary, IAVA recently received the highest rating - four-stars - from Charity Navigator,
America's largest charity evaluator. 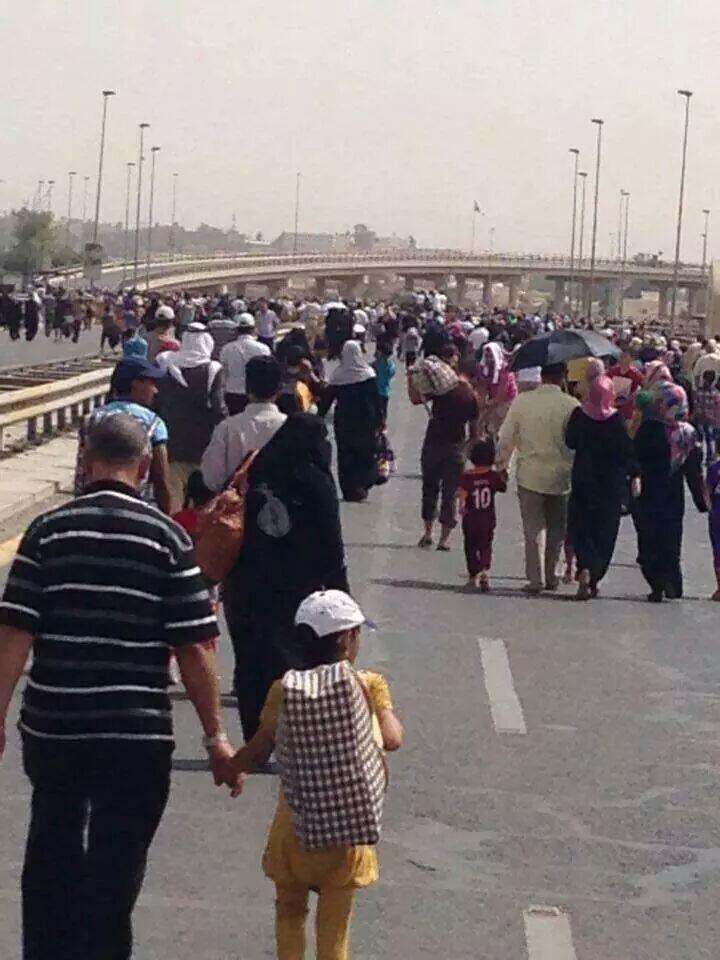 Why are people leaving Mosul?

Mosul is in Nineveh Province -- so now he's targeting both Anbar and Nineveh.  What do they have in common?  Unlike the Shi'ite Nouri al-Maliki, the people in those two provinces are predominantly Sunni.

Aymenn J Al-Tamimi @ajaltamimi  ·  8m
1 more comment for tonight:what's going on in #Iraq is not a civil war; it's a war between 2 state entities:the Islamic state & Baghdad govt
Whatever is taking place, Iraq Body Count notes that violence has claimed 465 lives in the first eight days alone.

The PUK is the Patriotic Union of Kurdistan which is headed by Iraqi President Jalal Talabani.  The PUK's standing in the Kurdistan Region is iffy.  For years, the PUK and KRG (Kurdistan Regional Government) were the two dominant political parties.  Then, last fall, provincial elections resulted in a major upset -- Gorran beat out the PUK.

In the April 30th elections, the PUK managed to do better.  This was in part due to a video of Jalal Talabani released at the time of the election.

The video had impact because, although photos of Jalal from his right side had been published, there had been no video of him since he was taken to Germany.

Saturday, the editorial board of the Observer noted, "Nouri al-Maliki, Iraq's tough-guy prime minister, continues to dominate post-occupation politics in Baghdad. He is seeking a third term despite electoral setbacks last month and his failure to curb sectarian violence."

No accomplishments and increased violence mark Nouri's second term, yet he thinks he deserves a third. Daily Sabah reported yesterday:

The parliamentary bloc of Iraqi Shiite leader Muqtada al-Sadr said Sunday that it would join the opposition if Nouri al-Maliki assumed a third term as prime minister of Iraq.
"Al-Maliki's two previous terms tell us that he will not succeed in a third," Diaa al-Asadi, the secretary-general of al-Sadr's Ahrar bloc, told Anadolu Agency.
He said al-Sadr's bloc does not have a personal problem with al-Maliki but with his monopoly over independent agencies affiliated to the Iraqi parliament.


Nouri's State of Law did not secure enough seats for the majority government Nouri announced he was seeking ahead of the elections (that was one of the big setbacks for Nouri in the April 30th elections). He must now count on the White House to again save him from failure by securing another term for him as prime minister or he must make nice with other political blocs to cobble together enough support to form a government.  But cobbling may prove difficult since he's alienated so many.   We'll close with this Tweet: