Kat: Madonna's very upset over leaks of tracks from her forthcoming album. 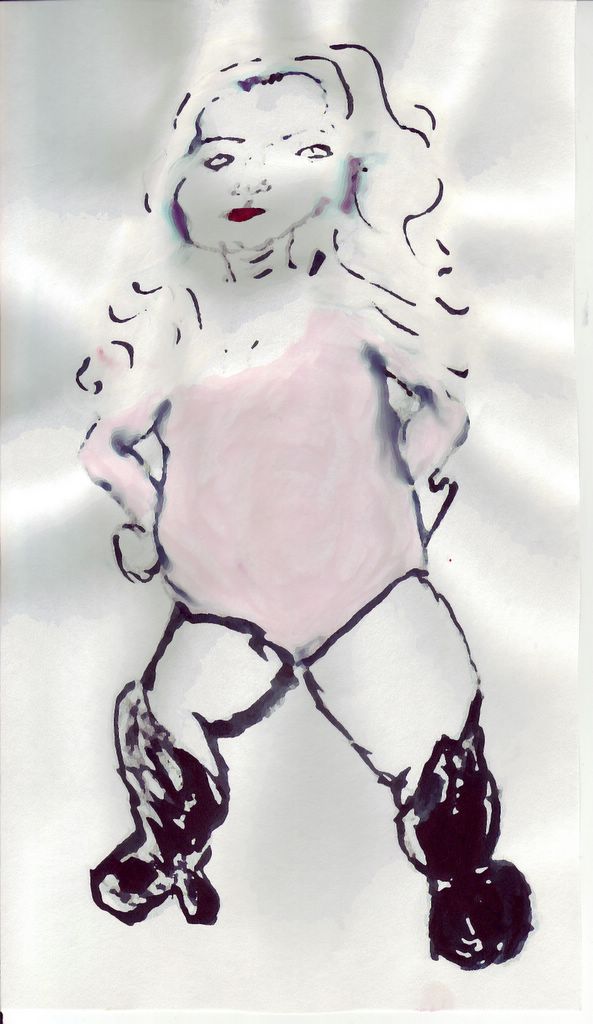 She then turned around and issued tracks online via iTunes.

Apparently, as she once claimed to have chained herself (when people objected to her being chained at the neck and crawling on all fours in the video for "Express Yourself"), she now wants to claim she's raped herself.


Madonna's music being exposed might be like ripping her dress off her in public but it's really not like being raped and her comments were offensive, as Ann noted in "The problems with Madonna."


It's also true that the leak allowed the album to receive way more publicity than it warranted.


It's been a long ride for Madonna and this account of her insisting the leaks were a form of terrorism features a photo underscoring just how many miles Madonna's face has  traveled.


There is no music career anymore and that's what Rebel Heart really reveals.

Like many an over sixty diva, Madonna now has to depend on the dance charts to get 'hits.'


Madonna is a pop artist -- not a rock artist.

She's dependent on the pop charts to have significance and she hasn't hit number one in over 14 years.


If you take out the duets, the career is over.

If Madonna had a real record label and wasn't in her Judy Garland  Group V period, this might have been avoided.


That's pretty much all she's been now for over a decade. Boring.
We blame the critics who applauded her 'soft' side move.
They're the 'thinkers' that were seeing 'meaning' where there was none for most of Madonna's career. (In better days, Madonna laughed and sneered at them. Choosing to embrace them has killed any excitement in her career.) They're the type who, as early as the Who's That Girl tour were seeing 'empowerment' in the performance of "Live To Tell" where, for the song's ending, Madonna slumps then stands erect. They penned over-thought, embarrassing praise like this:
". . . a pose that suggest surrender and desolation, and then . . . as if recovering her strength and courage through an act of titantic will . . ." (We'll be kind and not name the 'author' of that crap.) People, she just stood up. The really bad rewrite of Joni Mitchell (lyrics) with the drone that would dominate in her later music had come to an end. She needed to do something on stage. (Another nitwit saw in that brief moment the battle against AIDS. We'll spare you his tripe.)

It was that kind of crap that led her away from actual songs ("Cherish," "Like a Prayer," "Holiday," "Angel," "Dress You Up," etc.) into what she is today: 'inspirational.'
With her more recent work (heavily on display in the concert NBC broadcasts) grafting banal lyrics onto the never ending wump-wump beat of a drone, some saw the influence of the Kabbalah. While she does now repeatedly present herself as the modern day Aimee Semple McPherson -- it's Church of the Madonna. Don't blame Kabbalah, these days it's all about her.


Rebel Heart may be the most boring album she's done yet and there's not an actual song on it except for "Ghost Town."  There's nothing in the lyrics to that song that anyone would want to sing along with but it's the only thing that doesn't sound like a drone.


1999's "Beautiful Stranger" is a minor song in Madonna's canon but it's one that cheered people up when it played.  You could dance to it, you could sing to it.

It wasn't trying to be deep.

The deeper Madonna tries to be, the more shallow she becomes.

And her 'inspirational' 'lyrics' for the last ten years have lacked anything identifiable.

The only reason to sing along with the nonsense was because you wanted to be Madonna.

A few still want to be, the way they wanted to be Mae West or any other person you'd see a female impersonator do.

Madonna got old and tired.

She could have pulled it off a little longer, had a few more hits, but she didn't trust the genre that made her a star.

Paul McCartney, the prince of pop, got it right.

If you want to be an artists with a string of pop hits, silly love songs are the way to go.

Madonna should have known it.

Along with forgetting what a song is, Madonna also wants  to pretend the years have not effected her -- clearly she owns no mirror -- and thinks chasing whatever is the latest trend will give her work meaning.

She isn't able to plumb the soul the way Joni Mitchell can.

Madonna's got just about enough emotional depth to pull off a top forty hit and that's really it.

In the past, she embraced that resulting in a string of hits and several classics (including "Like A Prayer," "Borderline," "Lucky Star," "Justify My Love," "Cherish," "Rain" and "Take A Bow").

In the last decade, she's acted as if she's better than her old hits and she's not.

This all reaches its nadir on the album due out in March -- the one we've all already heard repeatedly online --  with 'songs' like "Bitch I'm Madonna," "Unapologetic Bitch" and especially "Joan of Arc."

A new album by Madonna stopped being an event somewhere around Erotica.  There are many who,as a result, think Madonna did the initial leak herself to get publicity.  Regardless of who did the first leak, when she allowed iTunes to pre-release some of the tracks and they underwhelmed, she should have known it was time to kill the album and get back in the studio and record some actual songs -- things people wanted to hear when they're stuck in traffic or standing in line at McDonalds, little bits of life that they could recognize and hum along too.


Instead, she's offering up Rebel Heart, an album that argues for a defibrillator -- though if this is what she's planning to keep offering, I'm hoping she signed a DNR order.