An Iraqi tribal leader said Saturday that ISIS militants are gaining ground in Anbar province, predicting a "collapse within hours" of Iraqi army forces there if tribal forces withdraw.
Sheikh Naim al-Gaoud, a Sunni Muslim leader of the Albu Nimr tribe, called for more U.S. intervention -- including ground troops, arming tribes directly or at least pressuring the Iraqi government to give the tribes more firepower.
While U.S. officials have said that ISIS, which calls itself the Islamic State, is on the defensive in Iraq and Syria, al-Gaoud says that's definitely not the case where he is.


The Sunni fighters against the Islamic State in Anbar have been denied weapons and support.

They're the only ones who can effectively fight in the Sunni dominant province.

Even if the Shi'ite militias could get their acts together -- and stop slaughtering Sunni civilians -- any victory they might have would be negligible due to their awful (and deserved) image in Anbar.

Saturday saw the assassination of Sunni Sheikh Qassem al-Janabi and his son and six bodyguards.  The attack was apparently carried out, in Baghdad, by Shi'ite militias.

In response, Stephen Kalin (Reuters) reports that 75 MPs are now boycotting Parliament as a result -- this includes "some Shi'ite members" due to Iraqiya being part of the walkout (Iraqiya is a non-sectarian political slate which includes Sunnis, Shi'ites and other groupings).


Had the US government bothered to work on diplomacy, they might have some pull right now.  But Barack's just focused on lining up bombers and fighters from other countries.


And he's done nothing to condemn the attacks on Sunnis by Shi'ite militias.  Human Rights Watch's Kenneth Roth Tweets:


Abuses by pro-Iraq govt Shia militia are escalating. 1000s of Sunnis forced from their homes. http://trib.al/GMP91A3 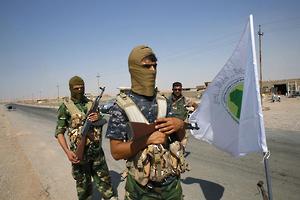 
Margaret Griffis (Antiwar.com) counts 148 killed in violence across Iraq today as Barack's non-solution do nothing to promote peace.


I'm traveling in some vehicle
I'm sitting in some cafe
A defector from the petty wars
That shell shock love away
-- "Hejira," written by Joni Mitchell, first appears on her album of the same name

The number of US service members the Dept of Defense states died in the Iraq War is [PDF format warning] 4494.