Saturday, September 12, 2015.  Chaos and violence continue, Nouri al-Maliki's latest scheme blows up in his face, kidnapped Turkish workers are back in the news, the attacks on Canada's NDP party continue (because the NDP is arguing for peace), and much more.

Friday evening, Tim Arango (New York Times) reported the latest on the September 2nd Baghdad kidnapping of 17 Turkish workers and their Iraqi interpreter: "A previously unknown Shiite militia released a video" of those kidnapped and called for "Turkey [to] stop the flow of jihadists into Iraq and lift a seige of several Shiite-dominated villages in Syria."


Iraq Times notes that the video posted by "death squads" is approximately three minutes and has the 18 victims in the foreground with five masked men -- four of which are holding guns (even if you don't read Arabic, there is an image capture from the video, FYI).  And here's some of the video:


Dana Khraiche and Selcan Hacaoglu (Bloomberg News) add, "The group, which appeared to be Shiite, also called for Turkey to 'stop stealing oil' through Iraq’s semi-autonomous Kurdistan region and to end sieges on Syrian villages with majority Shiite populations, according to a video posted on social media on Friday. Nurol Holding Chief Executive Officer Ugur Dogan confirmed the men being held in the video are company staff."  On the oil, Tim Arango explains, "The demands include stopping the flow of oil from Iraqi Kurdistan through Turkey, something that has been at the heart of a dispute between Baghdad and the semiautonomous Kurdish region in the north."

AFP reports Grand Ayatollah Ali al-Sistani has issued a statement: "We demand the release of the kidnapped men and the end of such practices, which harm the image of Islam." Alsumaria adds that al-Sistani stated the practice of kidnapping also drops the prestige of the Iraqi state/government.


Alsumaria also reports that Shi'ite cleric and movement leader Moqtada al-Sadr has deemed the kidnapping a "heinous crime" and called for the immediate release of the 18 kidnapping victims.

The video of the kidnapping victims is not the only video catching attention in Iraq currently.  Mamoon Alabbasi (Middle East Eye) reports:


A video circulating on Iraqi media outlets purportedly shows the head of Iraq's most powerful militia boasting of battles on behalf of Iranian forces against the Iraqi army during the first Gulf war.
In the video, which appears to be filmed by Iranian TV in the late 1980s, Hadi al-Ameri said that his forces had managed to deal fatal strikes against "the enemy," in a reference to the Iraqi army under executed President Saddam Hussein.
Ameri then added that his forces managed to stop the "mad" Iraqi advance, which he said was backed by "the hypocrites," in a reference to the Iraqi-based Iranian opposition militia People's Mojahedin of Iran (MEK).


Meanwhile Reuters reports, "Qatar’s emir has appointed an ambassador to Iraq, the first since the embassy was closed 25 years ago, Iraqi and Qatari media said, in the latest sign of a thaw in relations between Gulf Arab countries and Iraq."   Zayed al-Khayareen is the new ambassador.  Heba Fahmy (Doha News) reminds:


The decision comes on the heels of a controversial conference that Doha hosted to discuss political issues in Iraq.
That event apparently upset Baghdad, prompting Iraq to recall its Charge D’Affaires ambassador to Qatar last week after what it called a “flagrant intervention in internal affairs.”


For those who missed that drama, Nouri al-Maliki attempted to oust the Speaker of Parliament.  This was a conspiracy that actually should have landed Nouri in prison.  There was a meet-up in Doha.  Nouri tried to use the participation of the Speaker of Iraq's Parliament, Salim al-Jabouri, as a pretext to have him removed from office.  Prime Minister Haider al-Abadi did nothing (no surprise).  The real surprise?  The US State Dept actually did something.

It leaked the news that Nouri's State of Law was in attendance (Sadiq al-Rikabi among them) as well as members of the Dawa Party (Tarek Najm).

He forgot to note that his State of Law were among the (Shi'ite and non-Baathist) participants.

He's still trying to stir up trouble over this but it appears his moment has passed for this faux scandal.


In other news, the attacks on Canada's National Democratic Party continue.  As noted in Thursday's snapshot, the NDP has the common sense position that the year of bombing Iraq with war planes on the pretext of defeating the Islamic State has been a failure and, with combat having failed, it's time to attempt new ways to address the various crises in Iraq.

This honest appraisal and common sense has already earned them scorn from the Canadian Press.   Now the hag of Canada's political commentariat, Kelly McParland (think Thomas Friedman with even less intelligence) has come after them.

Given his status as frontrunner to become prime minister in October, Thomas Mulcair’s views on the crisis in the Middle East bear closer scrutiny than they’ve received to date.
In an interview with the CBC’s Peter Mansbridge, he repeated his rote dismissal of any role for Canada’s military in halting the horrors perpetrated by the Islamic State across Syria and Iraq. “We will immediately stop the bombing mission and bring those troops home,” he said, stressing he was “profoundly in favour “ of the pledge to pull out.

McParland is a mean spirited man who fools himself into believing safety for Canada comes from dropping bombs on Iraq.

Barack's 'plan' has been a failure.  They've had to cook the books in an attempt to demonstrate otherwise.  But even that's fallen apart. As Ali Watkins (Huffington Post) notes:


News that senior U.S. intelligence officials may have doctored analysis on the Islamic State weighs heavily on Washington. It suggests that President Barack Obama's intelligence apparatus didn't learn from the costly failures of the Bush era.

The Daily Beast reported late Wednesday that more than 50 intelligence professionals have formally complained that their analysis of the Islamic State, also known as ISIS, and of Syria's al Qaeda branch, al Nusra, was altered by U.S. Central Command higher-ups in order to make the U.S. military campaign to defeat those groups look more successful than it actually was.


It really is amazing to watch how many cowards -- who used to pretend to be pro-peace -- in the US stay silent while the NDP is attacked.

And someone can make the argument, "You support the NDP."

I don't vote in Canada, I'm a citizen of the United States.

But, yes, I do know many NDPs -- including Olivia Chow -- and you can make the argument that I'm 'just sticking up for friends.'  But the reality is honestly that I would support any group standing for peace and being attacked for that stance.

Turning to some recent violence, All Iraq News notes Kurdish Peshmerga commander Muhammad Haji Mahmoud was injured Friday as the Peshmerga attempted to recapture villages near Kirkuk.  Iraq Times reports 2 Friday evening Dhuluiya bombings left 5 security forces dead and four more injured.  Today?  Alsumaria notes a Kirkuk province bombing left 3 people dead and six more injured (they are said to have been fleeing the Islamic State), a Baquba attack left two police officers dead, a Harthiya stick bombing left one person injured,  That is some of the violence, not all.

Protests continued Friday in Iraq and as the front page of the Al Mada newspaper website notes . . . 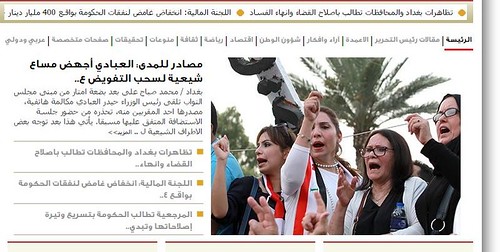 
It's interesting how the western press still ignores Iraqi women.


If they can use them to pimp war, to promote destruction, they're all over the women.

These women and the girl may be wonderful people but for a year now we've been decrying the Yazidi political leadership teaming up with right-wing American officials and a right-wing p.r. firm.  We noted that we were not promoting their stories for the reason that it's the same outlets and officials that pimped war on Iraq.

We've washed our hands of them and done so publicly.

That's why we don't cover this nonsense.


But why does the western press -- especially the US press -- ignore Iraqi women unless it comes out of the right wing of the War Factory?

Why do they ignore the female activists protesting?

Why do they ignore the female politicians?

(Including the female MP who states Haider al-Abadi bailed on Parliament Thursday after he learned that he was going to face serious questioning.)

Iraqi women have been ignored by the western press throughout the Iraq War.


This continues to this day.


So when the western press is in a frenzy over Yazidi women being raped or in combat -- it's suspect.

Not that whatever didn't happen, but their concern and interest is suspect.


We will not take part in the promotion of war propaganda.  Sadly, many so-called news outlets in the US cannot say the same.


So-called news outlets also can't seem to get their reporters to cover Congressional hearings.  With that in mind, we'll close with this:


Isakson to Hold Hearing on Veterans’ Health, Benefits Legislation
WASHINGTON – The Senate Committee on Veterans’ Affairs, chaired by U.S. Senator Johnny Isakson, R-Ga., will hold a legislative hearing on Wednesday, September 16, 2015, on pending legislation for veterans’ health care and benefits, as well as legislation to increase accountability at the Department of Veterans Affairs.
The hearing will be streamed online at www.veterans.senate.gov.
The committee will considering the following proposed legislation at the hearing:
S.290 (Moran), Increasing the Department of Veterans Affairs Accountability to Veterans Act of 2015
S.563 (Moran/Tester), Physician Ambassadors Helping Veterans Act
S.564 (Moran/Tester), Veterans Hearing Aid Access and Assistance Act
S.1450 (Hirono), Department of Veterans Affairs Emergency Medical Staffing Recruitment and Retention Act
S.1451 (Hirono), Veterans’ Survivors Claims Processing Automation Act of 2015
S.1460 (Brown/Tillis), Fry Scholarship Enhancement Act of 2015
S.1693 (Hirono), a bill to expand eligibility for reimbursement for emergency medical treatment to certain veterans that were unable to receive care from the Department of Veterans Affairs in the 24-month period preceding the furnishing of such emergency treatment, and for other purposes.
S.1856 (Blumenthal), a bill to provide for suspension and removal of employees of the Department of Veterans Affairs for performance or misconduct that is a threat to public health or safety and to improve accountability of employees of the Department, and for other purposes.
S.1938 (Blumenthal/Tillis), Career Ready Student Veterans Act
(Discussion Draft) a bill to make improvements in the laws administered by the Secretary of Veterans Affairs relating to educational assistance, and for other purposes.
WHO:         Senate Committee on Veterans’ Affairs
WHERE:   418 Russell Senate Office Building
WHEN:      2:30 PM
Wednesday, September 16, 2015
WHAT:      Pending Legislative Hearing
###
The Senate Committee on Veterans’ Affairs is chaired by U.S. Senator Johnny Isakson, R-Ga., in the 114th Congress.
Isakson is a veteran himself – having served in the Georgia Air National Guard from 1966-1972 – and has been a member of the Senate VA Committee since he joined the Senate in 2005. Isakson’s home state of Georgia is home to more than a dozen military installations representing each branch of the military as well as more than 750,000 veterans.