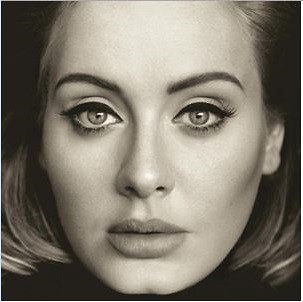 That is how old Barbra Streisand is.


So does Adele plan to keep naming her albums after her age when she began recording them?

Supposedly, she's a long distance runner, someone whose career will have the legs of Frank Sinatra, Ella Fitzgerald, Barbra Streisand and Duke Ellington.

So having already released 19 and 21, shouldn't see be thinking of actual titles for her albums?

Maybe it's too soon.

Barbra's fans might point out that she was only 24 when her third album (THE THIRD ALBUM) was released (Adele's 27 as 25 is released) and Barbra had already starred in I CAN GET IT FOR YOU WHOLESALE on Broadway (and received a Tony nomination) and would be in rehearsals for (and star in) FUNNY GIRL before she turned 25.

So Adele's focus on music, one might expect, would produce something a little more consequential than 25.

In fact, instead of advancing, she's actually retreated -- especially with regards to her vocals which are lifeless compared to the previous album.

But the point is, Brits appreciate soul singing in a way that Americans don't appear to.

And Adele was seen as a soul singer.

25 makes you wonder why?

She's about as soulful these days as Vicki Carr.

And 25's a middle-of-the-road album filled with elevator music.

"Hello" is the kind of crap a celebrity -- not an artist -- writes.

And people have eaten it up.  It's gone to number one in England and here in the US.

And some will point out that the album, released Friday in the US, has already sold 900,000 units.

But MUSIC hit number one in 1972 and stayed there for three weeks.

Yet most people today wouldn't cite it as a success or even a solid album.

The real reason it sold (briefly) was because it was Carole King's follow up to her classic TAPESTRY album.

Of MUSIC and its follow up RHYMES & REASONS, Elton John offered (in a 1973 interview with ROLLING STONE's Paul Gambaccini):


With all due respect to Carole King, Tapestry was a great album, but the other two albums after that sounded like they were recorded at the same sessions but that Tapestry was the first ten tracks done and the next 20 were done when everyone was getting increasingly more tired.


And that's really how I think 25 is going to be seen.

There's no "Rolling In The Deep" here.

Not one damn song, and there are eleven tracks, that generates any kind of real life or excitement.

Whitney Houston and Elvis Presley saw their careers end due to early deaths.

But both were long distance runners.

And Whitney had a set of pipes and then some.

She was known for tearing into a ballad -- as was Adele after 21.

But when Whitney followed up her self-titled debut, she did so with 1987's WHITNEY which contained "I Want To Dance With Somebody" and "So Emotional."

The first is just fluff.  But it is fluff that has energy and a strong beat.  On "So Emotional," Whitney cooks.

Along with the ballads, she was smart enough to include those tracks and they both ended up topping the charts.

She doesn't appear to care what fans might want.

There are lot of stupid ballads with stupid lyrics.

Next time Adele has writer's block, she needs to get real writers to compose some songs, not try to force herself out of it.

"I Miss You," "When We Were Young," "Remedy" and "Water Under The Bridge" aren't ballads as much as they are mid-tempo songs -- or what passes for them.

With a strong song in the set, these four could be part of the praise earning.

But when these neutral songs are expected to be striking and stand outs?

Then there's "Million Years Ago" which sounds like an outtake from Dionne Warwick's recording session for "(Theme from) Valley of the Dolls."

At least it has a little bit of soul in it (maybe due solely to Bruno Mars' work on the song).

What stands out most on this album is how generic Adele has become.

Without her soulful vocals, she's just Susan Boyle but Boyles is smart enough to know she needs actual songs -- not esoteric musings apparently on how fame has changed her life -- which is why Susan Boyle recorded Sarah McLachlan's "Angel," Pink Floyd's "Wish You Were Here," Paul Simon's "Bridge Over Troubled Water" and John Lennon's "Imagine" on her 2014 album HOPE.

She doesn't even include "Skyfall" as a bonus track.

I wasn't impressed with the tune and felt it was the weakest of James Bond theme songs.

Musically, it was more atmospheric and fluttery than anything we'd expect for Bond.

Lyrically, it was a mess of meaningless, meandering lyrics which never added up to an actual story -- let alone any relatable event.

Apparently, that's the road Adele wants to waltz down, another high priestess who wants to be 'inspiring' with dull, drab songs.

How bad and meaningless are the lyrics on the new album?

As Dak-Ho points out, there's a reason she didn't include them in the booklet for the album.

Instead, we get a retread of the photos from 21 -- Adele 'struggling' in the studio.

Mainly because people love "Rolling In The Deep," "Someone Like You," "Rumor Has It," etc.

And it will sell because Alasdair McLellan has done an amazing job with the photography, the cover photo alone is amazing.


But when it's time for 27 or 29 or 33, whatever the next album is, Adele's going to find out that a lot of her fans have moved on because she issued an album that's grossly inferior to her previous one.


Many will probably move over to Jess Glynne and her amazing, powerhouse debut album I ONLY CRY WHEN I LAUGH.  It has all the excitement and life that's missing from 25.