More US troops headed to Iraq -- PM of Iraq says 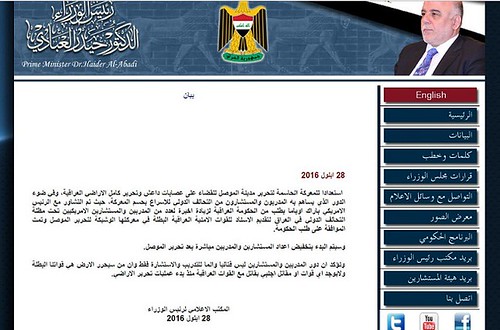 Quick translation of the above posted to Haider al-Abadi's website this morning (he's the prime minister of Iraq):


As they prepare for the major battle to fully liberate the city of Mosul and eliminate the gangs of [the Islamic State], and in light of the fact that trainers and advisers from the international coalition will speed up the conclusion of the battle, in consultation with US President Barack Obama and at the request of the Iraqi government the number of American trainers and advisers under the umbrella of the international coalition in Iraq will be increased to provide backup for the Iraqi security forces during the Liberation of Mosul -- and this size of advisers and trainers will reduce once Mosul has been liberated.  We emphasize that the role of trainers and advisers is not combat but only for training and consultation and the only ones who will liberate the land is our [Iraqi] troops.

This means more US troops in Iraq.


And the following community sites updated: