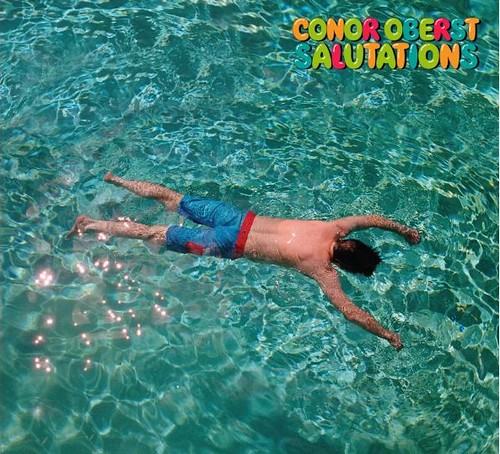 I sat down today in a high barber's chair
To hear the town gossip and clean up my hair
He said she was seen on the bus station stairs
With her suitcase threatenin' to walk
Not sure how true it was but I'll hazard a guess
It's probably not more and it's probably not less
If that college kid bookie was accepting bets
The brackets would mostly be chalk
Yeah it's safe to assume that she's lost
But it isn't as though we get what we want
No matter how hard or long we have fought
Oh my happiness is a mere afterthought
When I'm with her I keep it in mind
Then she's gone and I've run out of time
Yes, the writing is sharper than ever.
The voice is his haunting boyish keen (I mean that as a compliment).
Emmylou Harris has blended well with Conor.  He could probably blend well with most singers.  Like Cher, he's got a very distinctive voice and, like Cher, it has a natural catch to it that conveys wisdom and a life lived.
He would have ruled the 60s.
He would have ruled the 70s.
He would have been Jules Sheer in the 80s -- others having hits with his songs and inventing the whole MTV Unplugged revolution but not getting his earned props for it.
By 1993, he was releasing his own albums.
It was too late for him then.
Kurt Cobain would be dead in a year.
And Kurt was an original.
A true artist.
One of the few that grunge produced.
Tori Amos was another.
And while she had the energy and talent to carry the genre elsewhere, Billy Corgan, Eddie Vedder and less famous names were stuck in an eternal pissing match that would destroy whatever talents they did have as they debased themselves and the memory of Kurt in an attempt to prove they were artists to be reckoned with.
Unlike those poser, Conor truly was and is an artist.
"I never was a good judge of when to call it a night," he sings on SALUTATIONS.
Maybe not but he also wasn't too good a judge about when to burst through the door and make an entrance.
But he's a songwriter and then some.
SALUTATIONS is a reworking of his previous album RUMINATIONS with seven new songs tossed on it.
I liked RUMINATIONS but I loved 2014's UPSIDE DOWN MOUNTAIN.
If I'd loved RUMINATIONS, I might not like SALUTATIONS.
But I think he actually found a better way to convey the songs this go round.
There's a simplicity to RUMINATIONS but it can make certain moments stick out that maybe shouldn't.
Think of it as his version of Joni Mitchell's classic album COURT & SPARK.
The production on that softened some of the sentiments that kept people away from Joni on, say, BLUE or FOR THE ROSES.
You all loved him once
When his glory was unmatched
Your signal when to celebrate was the bugle of his laugh
Oh, when it came time to stand with him
You scattered with the rats
You all loved him once
That time has passed
You all loved him once
When the future was opaque
His reassuring visions were the pillars of your faith
Through a thousand false horizons
He would always fly it straight
You all loved him once
That turned to hate
You all loved him once
An uncommon love at that
What you saw as a pedestal
Was his elevated path
So to satisfy the Philistines
You stabbed him in the back
You all loved him once
Imagine that?
That's from "You All Loved Him Once" and, like with Joni's "Just Like This Train" or "Down To You," the song works better in an expanded format.  If the words are too much for you, the sentiment, the music carries you along until you're ready to deal.
I think SALUTATIONS is a classic and one that we'll be listening to for some time to come.