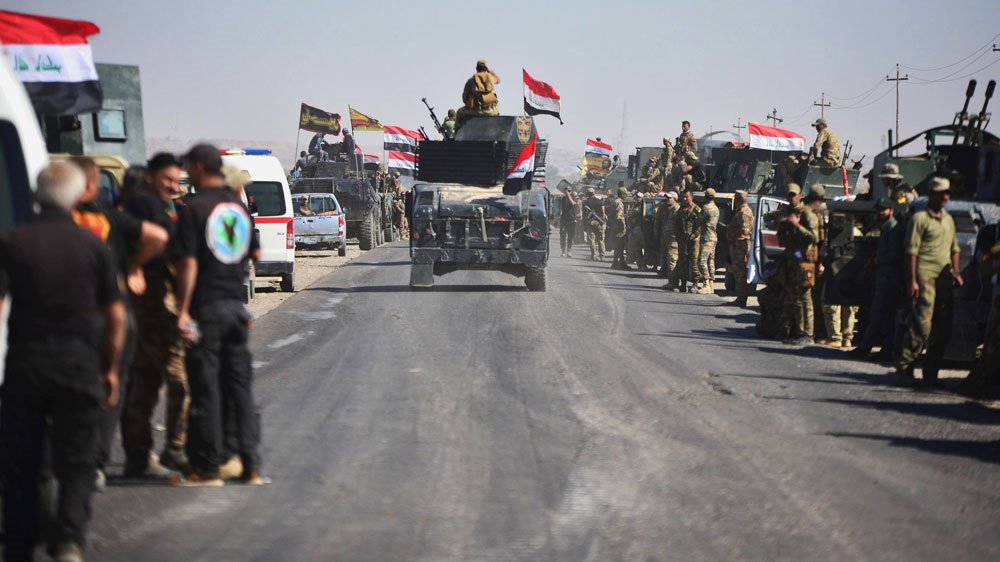 Al Jazeera's Charles Stratford, reporting from the outskirts of Kirkuk, said an increasing number of Kirkuk residents were trying to flee.

"Thousands of cars are filling the roads leading out of Kirkuk and the numbers are increasing. There is a lot of fear in the city for the Iraqi army's advance."


Chaos and fear -- as usual, the Baghdad-based government has a hand in it.


Iraqi state television said early Monday that Iraqi forces had begun an operation to seize the Kurdish-held city of Kirkuk and its surrounding oil fields, despite weeks of urgent efforts by the United States to keep tensions between its allies from boiling over into another war in the Middle East.
[. . .]
It was unclear whether American troops were in the area Monday morning. A spokesman for the coalition in Baghdad did not immediately respond to a request for comment. There was no immediate response from the American Embassy in Baghdad.


The RAND Corporation has repeatedly noted the issue of Kirkuk, such as in 2011:


The Kurds successfully pushed for the TAL and the 2005 constitution to require a census and a subsequent referendum to determine Kirkuk’s status, both of which they believed would strengthen their arguments to expand the boundaries of the KRG to include Kirkuk and other areas. Although Article 140 of the constitution required the census and referendum to take place by December 31, 2007, political leaders never agreed on how to conduct them, in part because Arab and Turkmen parties questioned the voting eligibility of Kurds who settled (or perhaps resettled) in the area since Saddam Hussein’s fall and feared that their participation would skew the results. Since the constitution failed to specify what would happen if the dead- line was not met, Arab and Turkmen leaders now argue that the constitutional requirement for the census and referendum has expired, while the Kurds maintain that the requirement to conduct a census and referendum still exists. Th is stalemate—which is aggravated by unresolved ques- tions related to federalism and regional autonomy—obstructs eff orts to resolve the status of the disputed territories. Any political settlement will require Iraqi leaders to come to agreement on whether to undertake a census and/or referendum in some manner or to eliminate the require- ment, after which they must modify the constitution and relevant statutes appropriately.
The historically multi-ethnic city of Kirkuk has immense political, emotional, and economic importance to the groups involved. Kurds see the city as a critical piece of their history and as the center of an autonomous (and perhaps eventually independent) Kurdistan. Further- more, the city of Kirkuk itself sits directly on top of the largest oil fi eld in the region—making the territory a very lucrative asset.


The Shi'ite dominated government in Baghdad refused to follow the Constitution.


Not only that, but The Erbil Agreement included that Article 140 would be implemented.  The Erbil Agreement was how Nouri al-Maliki got a second term after the Iraqi voters rejected him as prime minister.  This legal contract was backed by then-US President Barack Obama.


But once Nouri got his second term, he walked away from the contract and Barack acted as though it never existed -- despite the fact that the US government brokered it.


The US government has been disgraceful in its dealing with the Kurds.


Repeatedly, it tells people to abide by the law.


But only when the law says "wait."


When the law is on the side of the Kurds, the US government ignores the law.


The law is that a referendum and census were to be held by the end of 2007.


It has not taken place.


And now yet another war may break out as a result.


But it's the Kurds that are at fault?


Not Nouri al-Maliki who never held the referendum and census?


Not the US who looked the other way as the law was ignored and broken?


You may remember that Hayder al-Abadi, current prime minister of Iraq, insisted on Friday,  "Our forces cannot and will not attack our citizens, Arab or Kurd."

#Iraq demands the withdrawal of #Kurdish forces from areas occupied since 2014 including #Kirkuk by 02:00 or they will be taken forcibly.


While so many rush to defend Baghdad and its use of Iranian-backed militias to attack the Kurds, not everyone's on board.

Ahmed Quraishi-PR‏ @Office_AQPk  7m7 minutes ago
Replying to @mknaeem
Every major city in #Iraq is in a mess. Armed militias act with impunity/extremism/sectarianism. #Kurds have reason to be skeptical.
#Kirkuk
0 replies1 retweet1 like