Yesterday, protests took place in segments of the KRG for the third day in a row.

While the protesters maintain that their anger is due to the mismanagement of the economy and widespread corruption, Kurdistan Democratic Party (KDP) officials maintained in interviews across their affiliated media channels that there is a regional conspiracy against the unity of Kurdistan.
Dilshad Shahab, an adviser to KRG Prime Minister Nechirvan Barzani, said that the government is doing everything in its power to overcome the crisis and has not stopped its efforts “despite the … plots and hostile hands that want to disrupt the peace” and stability of the Kurdistan region.
Barzani, accompanied by his deputy Qubad Talabani, is in Germany meeting officials, including Chancellor Angela Merkel. He called for calm on Dec. 19 and asked the protesters to refrain from using violence.

Possibly fueling the protests is the lack of funds since Baghdad refuses to fork over the KRG's part of the national budget.

The tensions between Baghdad and Erbil continues to grow and the US government has done little to nothing.


The tension was a topic US State Dept spokesperson Heather Nauert was asked about on  Tuesday:

QUESTION: Yeah. The Dutch prime minister recently called on Baghdad to end its ban on flights to and from Kurdish airports, saying that it was getting in the way of Dutch military operations. Do you agree with that position? Do you think the ban should end, whether for military or humanitarian reasons?

MS NAUERT: Yeah. I was looking into this and talking to some of our experts who cover Iraq about this very issue earlier today, and I think this goes back to something that, for a couple months now, we’ve been calling for Iraq and Erbil to sit down and have talks. And I feel like we say this about a lot of nations, but it’s really a perfect example in Iraq. That is a situation where they need to work it out themselves. I understand under the Iraqi constitution that the central Government of Iraq has sort of management over the airports throughout the country. That’s my understanding of the Iraqi constitution – not only the airports but also the borders. But for that very reason, it’s even more important for Erbil and Baghdad to sit down and have talks about the status of its airports.

QUESTION: And you’ve been saying that for so long and that – I’ve got a different understanding of the airports, but anyhow.

QUESTION: I’ve been – I think it’s joint operations, but whatever. You’ve been saying that for so long. The Iraqis do nothing. In fact, they increase the punitive measures on Kurdistan and show no regard whatever – whatsoever for your calls for dialogue. Don’t you think it’s time to publicly pressure Iraq? For example, the German foreign minister, when the prime minister of the Kurdistan region just visited there, said, “We’re going to make our aid to both of you, Baghdad and Erbil, contingent on a dialogue.” Are you inclined to up your pressure because, so far, nothing has happened?

MS NAUERT: Well, we have spoken about this a lot here. I think you’ve asked me about it at every briefing.

QUESTION: And I get the same answer and nothing happens.

MS NAUERT: At every briefing since this happened. We continue to talk with the countries – I mean with Erbil and Baghdad. We continue to talk with them and urge them to sit down and have conversations. In terms of punitive measures such as withholding money or anything, we never forecast that. I’m not saying we would do it at all, but we just continue to ask the countries to sit down and have a conversation. It’s ultimately hurting themselves by not sitting down. We hope that countries would see the wisdom in that.
Okay.

QUESTION: If in a month from now we have this same conversation, is there anything you’re prepared to do to put more pressure on Baghdad?

MS NAUERT: Laurie, I think that’s a hypothetical. We’ll just follow it and see what happens then.

QUESTION: A month from now? Okay.


If the tensions are still present a month from now, the State Dept may have something to say.  Maybe.  Possibly.  Per Heather.

To read many press accounts, that's the cause of the tension.

That's sort of like saying that the problems in Lorena and John Bobbitt's marriage started when she cut off his penis and ignoring the years of abuse and infidelities.

John Bobbitt may not have counted any problems prior to his penis being cut off but those problems existed.

The tension between Baghdad and Erbil starts long before September 25 of this year.


There are many factors included those in the Tweet below:

PM Barzani said the people have the “just right to protest,” in the Kurdistan Region, a democratic value respected by the KRG.

He warned, however, the “course of protests” has been manipulated by some to cause violence.

“We know there is a hand behind the events,” PM Barzani said.

He refused to name names as to whom he accuses of inciting violence, but added that the violent attacks against public and private offices occured just as the Iraqi forces started to build up military forces in Makhmur, near Erbil.


“Protest is the just right of everyone,” he repeated, “But the course [of protest] has changed from making demands to burning offices and making problems. As the KRG, we have the legal duty to limit this chaos, the KRG is serious about containing the chaos and to put an end to it.”

Iraqi President Fuad Masum called on protesters in the northern Kurdistan region to exercise restraint, abide by the law and not to damage government and political party headquarters.

“A number of cities and districts north of the country have witnessed protests mostly by employees and workers who demand payment of their salaries and benefits which had been mostly delayed for several months,” the president said in a televised speech.
“We call on all our people, especially the protesters to show calm, abide by the law and exercise restraint.”
He has also called on the security authorities to promptly investigate the perpetrators of the attacks and hold them to account for their actions as well as to protect the protesters’ security and ensure their right to fully express their demands.


Violence continues throughout Iraq.  Today, the Committee to Protect Journalists notes that Iraq is number one for 2017 when it comes to the number of journalists killed. 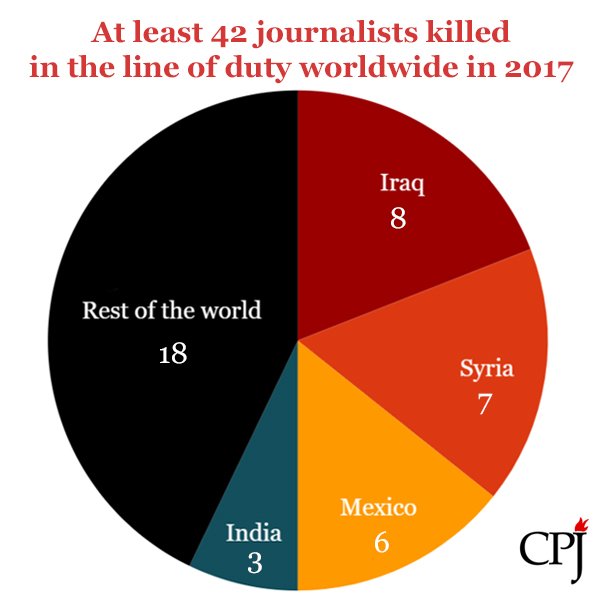 After three years of fighting in Iraq and Syria, the militant group Islamic State has been forced out of large swathes of territory. But local journalists and press freedom groups with whom CPJ spoke said that the defeat of Islamic State doesn't necessarily mean that journalists will be any safer.
The extremist group is one of the main suspected sources of fire in the killings of journalists in Iraq and Syria ever since it declared a caliphate in Mosul in June 2014. During its three-year grip over large parts of both countries 38 journalists were killed, at least eight are missing, and others were forced underground as the militants created a monopoly over information in the territory under its control, CPJ has found.
But Islamic State is not the only threat facing journalists in the region. Local journalists with whom CPJ spoke during its mission to Erbil and Lebanon in March 2017, predicted that the emergence of militias, political pressure, censorship, and sectarianism would pose a threat in a post-Islamic State Middle East.
Abdalaziz al-Hamza, co-founder of the citizen journalist group Raqqa is Being Slaughtered Silently (RBSS), told CPJ that journalists will remain under threat.
"I don't think the end of [Islamic State's] presence in Syria will bring any opportunities for Syrian journalists. Threats against journalists will worsen. Armed groups remain the main threat to journalists, although the level of threat posed to them changes from one armed group to the next," al-Hamza said.
Militias have proliferated across the Middle East in recent years. Authorities in Iraq and Syria who relied on these politically and religiously diverse groups to help oust Islamic State, must now decide whether to integrate these militias into their own forces, or try to disband them, according to news reports.
Rights organizations, including Human Rights Watch and Amnesty International, have repeatedly condemned abuses allegedly carried out by militias, including extrajudicial executions, forcible disappearances, and torture.
Dlovan Barwari, from the independent Iraqi civil rights group Legal Defense for Crimes Against Press Freedom, said that he sees them as the biggest challenge. "Militias don't hesitate to use all kinds of threats against journalists, including killings. Journalists in areas retaken from [Islamic State] are very cautious and exercise self-censorship for fear of militia brutality and of being accused of terrorism," Barwari said.
Ragaz Kamal, co-founder of the local Iraqi human rights organization 17Shubat for Human Rights, told CPJ that journalists in Iraq face a threefold threat from "armed groups that have gained political cover, like the PMF, political parties, and the authorities because of their job."

Kamal added, "None of these groups tolerate criticism and they are rarely held accountable for their actions against journalists. The end of [Islamic State] will not change much for journalists in either Iraq or Kurdistan."


CPJ notes Iraq holds more than just the record for 2017:

CPJ‏Verified account @pressfreedom 8h8 hours ago
More journalists have been killed in #Iraq--at least 186--than in any other country since CPJ began keeping detailed records in 1992. https://cpj.org/killed 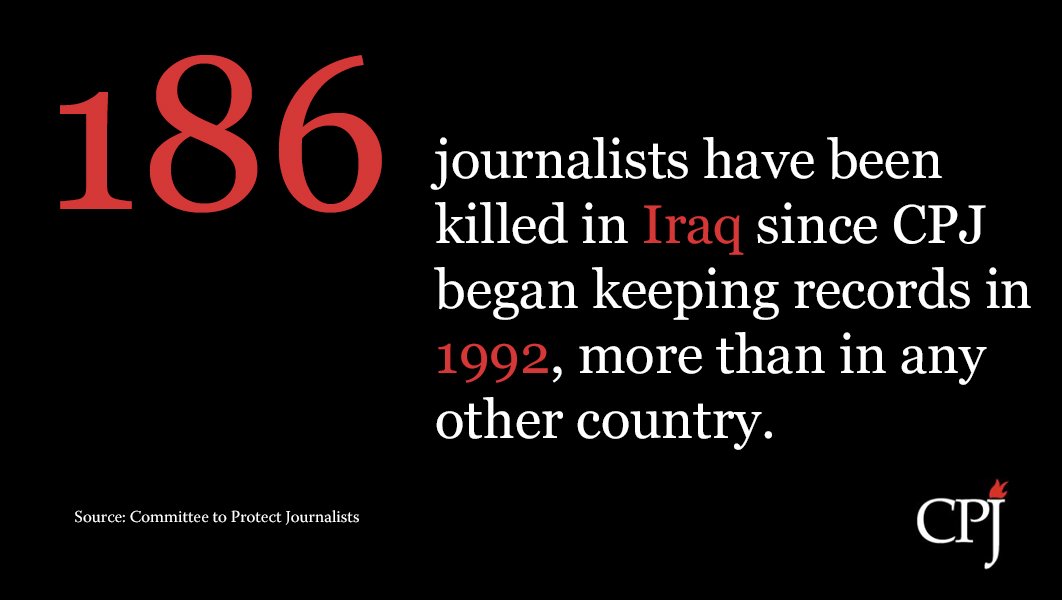 An Associated Press investigation has found that between 9,000 and 11,000 civilians died in the final battle to drive Islamic State extremists out of the Iraqi city of Mosul.

That’s a civilian casualty rate nearly 10 times higher than what has been previously reported.  The deaths are acknowledged neither by the coalition, the Iraqi government nor the Islamic State group’s self-styled caliphate.

Responding to reports made by the Associated Press that between 9000 to 11,000 civilians have been killed in the battle for Mosul, Lynn Maalouf, Head of Research for Amnesty International in the Middle East said:
“We are horrified, but not surprised, by these new figures. These numbers are directly in line with our previous findings that thousands of civilians were killed during the battle for Mosul – and that these deaths were caused not only by the so-called Islamic State group, but also by Iraqi and coalition forces. The AP’s estimate is more than ten times the figures reported by coalition forces, who have claimed responsibility for only 326 deaths.
“The failure of Iraqi and coalition forces to acknowledge and investigate civilian deaths in Mosul is a blatant abdication of responsibility. We are demanding transparency and an honest public account of the true cost to civilians from this war, as well as an immediate investigation by US-led coalition and Iraqi forces into the violations and unlawful attacks documented by Amnesty International and other independent groups during the battle for Mosul.
Many of these newly reported deaths were as a direct result of civilians being killed or crushed under buildings damaged in attacks by the coalition and Iraqi government forces that were disproportionate or otherwise indiscriminate. The US-led coalition and Iraqi forces failed to take into account the reality on the ground. If these forces had fully complied with their obligation to take necessary precautions to minimize civilian harm, some of the extensive destruction and loss of civilian life could have been avoided.”


The following community sites -- plus Jody Watley and the ACLU -- updated: