Can't happen fast enough.  In fact, it's way too late.


On Josh Ritter's "Be Of Good Heart," Joan Baez repeatedly sounds like she needs to stop singing and clear her throat.  But she never does.

Or, when she tries to sing "the road stretched out before me," really bad as she makes a sound that suggests she's being strangled.

It will most likely send people running.

If we're lucky, it'll send them running to Josh Ritter's back catalogue -- I'd suggest you start with THE ANIMAL YEARS.

In the meantime, you're left with WHISTLE DOWN THE WIND, Joan Baez's latest album. 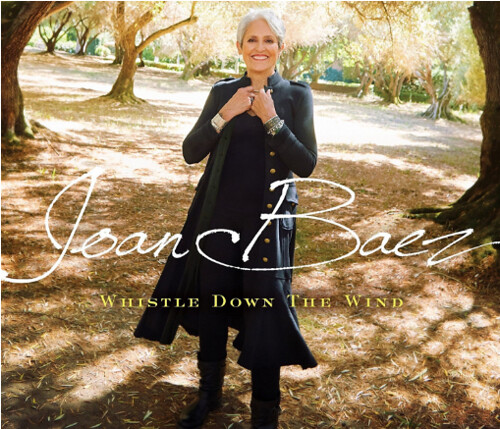 The title track's being pushed hard right now and that's a smart move.

What's left of her voice is used fairly well on this song that really doesn't require much more than a whisper and three notes.

No surprise, it's a Tom Waits song -- written by Tom and Kathleen Brennan.  No surprise because he's a singer but not anyone's idea of a vocalist.  It's the difference between Billie Holiday (who could put a song across with great feeling) and Ella Fitzgerald (one of the most technically amazing vocalists of the 20th century).

Baez records another Waits and Brennan composition for the album, "Last Leaf."

Her voice sounds ravaged on every note and by the second line of the first verse she's making noises that are neither attractive nor musical notes -- is it a death rattle that's being recorded?  It's hard to believe this isn't a live album or that the producer didn't work to patch together lines from various takes to offer the pretense at least that Joan can still sing.

The arrangements on the song are harsh as well and seem about a key to high for the notes she's failing to reach.

If you think it can't get worse, check out her second Josh Ritter song "Silver Blade" which is testimony to the reality that she's also lost all breath control.


"Well," you say, "Joan's politics.  Her politics are what shine through."

See, right there, that's where it ends for fake ass Joan.

The woman who, in 2006, was caught on radio -- AIR AMERICA RADIO -- referring to African-Americans as "coloreds" and finding herself so 'naughty' she had to giggle**.  (By the way, radio host, I know you read the site and e-mail C.I. from time to time, I'm being kind by not naming you but I still marvel over the fact that you didn't call Joan on this but just quickly changed the topic.)


Two years later, as if to atone? (Joan never atoned for trashing Coretta Scott King, did she?), she slammed back more Obama Kool-Aid than anyone.

And to that I say, whatever.

She finally endorses a presidential candidate for the first time ever.

But then comes the election.

Then comes the continued Iraq War -- the war that was going on when he came into office and continued after he left and continues to this day.

Then came all the wars he oversaw and the fact that he became the first president ever to have every years of his two terms -- eight years total -- with war going on.

Then came his drone war.

Then came his attack on the press.

And his attack on whistle-blowers.

And fat and fluffy Joan called it out when?

Not even to this day.

It's a damn shame she didn't retire after 2005's live album BOWERY SONGS.

Back then, her image, like her voice, was still somewhat intact.

She hadn't been caught using the term "colored" or demonstrating how funny she thought it was to call African-Americans "colored."  Her attacks on Coretta Scott King were not as well known.  She stood for peace.

What does she stand for?

A lot is made of the fact that, a year ago, she was inducted into The Rock and Roll Hall of Fame.

She's not rock.  She had no impact on popular music.

Put her in a folk music hall, sure.

But the answer to the lack of women in The Rock and Roll Hall of Fame -- the refusal to induct Cher, Carly Simon, Melanie, Janet Jackson, Tracy Chapman, Tori Amos and so many others -- is not to induct the undeserving Joan.

She winds down what will most likely be her final studio album with "I Wish The Wars Were All Over" and there are some who will wrongly see it as Joan recording a song about today.


The song was first recorded by Tim Eriksen in November of 2000 (for his self-titled 2001 debut).  It has nothing to do with the Iraq War, the Afghanistan War, the war on Libya, the war on Syria . . .

It's got nothing to do with today.

Not in a world where women are just as likely to fight in war as men but the song's "Pretty Polly" (how tired) sits at home and frets that the "king" has sent her beau off to war.

What a sad, pathetic trip it's been.

C.I. note, it was August 2005 when Joan Baez used the term "colored" to describe African-Americans on AIR AMERICA  -- she said it at least three times and giggled in self-amusement.