You get what it says, right?  Only American lives matter.

In  a war, it only matters to the faux resistance when American lives are taken.

Nicholas J.S. Davis (NEW MINT PRESS) notes the death toll in Iraq is easily 2.38 million killed since the start of the 2003 US-led invasion.

But Marcie Mills doesn't give two s**ts about those people.  2.38 million dead?  Oh, they're not Americans.  Most killed by American violence?  Oh, they don't matter.

How dare that blond bitch try to grandstand on John Lennon.  "Give Peace a Chance"?  Not only is it a song she's unfamiliar with, it's a thought that never entered her xenophobic head.

She and others want to scream about the NRA while failing to grasp that to the people in the Middle East, we are the NRA.  We are arming and killing.  And the useless Marcie Mills pretends she's a member of the 'resistance' and accomplishing something.  By yet again?  Doing not one damn thing.

Check Marcie Mills' non-stop Twitter feed.  Note that she said not one word about the Iraq War.  Guess you can't go down on Hillary and still find the voice to call out the ongoing Iraq War, huh?  A bunch of trashy fools trying to act like John Lennon is their spiritual guide when John Lennon would pull it out and piss on them.  Hey, Marcie, unlike your pressed against the glass face, I knew John Lennon.

It's cute the way Hillary and Her Vaginal Secretions lie and re-write history.  Take this jerk off.

Bradley Duke, I'm sorry to have to school your lazy, uneducated ass but Hillary was in the US Senate.  She didn't represent the city of New York, she represented the state of New York.  And where did they stand on war on Iraq?  Uh oh, Bradley Dukey Head, you're full of s**t on that one too.

The prospect of invading Iraq is significantly less popular in New York State than in the nation as a whole, and New Yorkers are more critical of the Bush administration's Iraq policy, according to a survey released yesterday by the Siena Research Institute in Loudonville, N.Y.
[. . .]
Residents of the New York City metropolitan area were less likely to favor an invasion than people upstate, and more likely to think that the United States has not done all it could to solve its problems with Iraq through diplomatic means.

Wow, Bradley Duke, you were wrong about everything.  Your punk ass just got served in public.  Maybe you'll stop lying about Iraq now?

VoteVets‏Verified account @votevets Mar 23
Both @POTUS and @ambjohnbolton worked to avoid serving in #Vietnam. Yet they’re chomping at the bit to start new wars with #NorthKorea and #Iran and sending another generation — someone else’s loved ones — off to fight for them. #chickenhawk 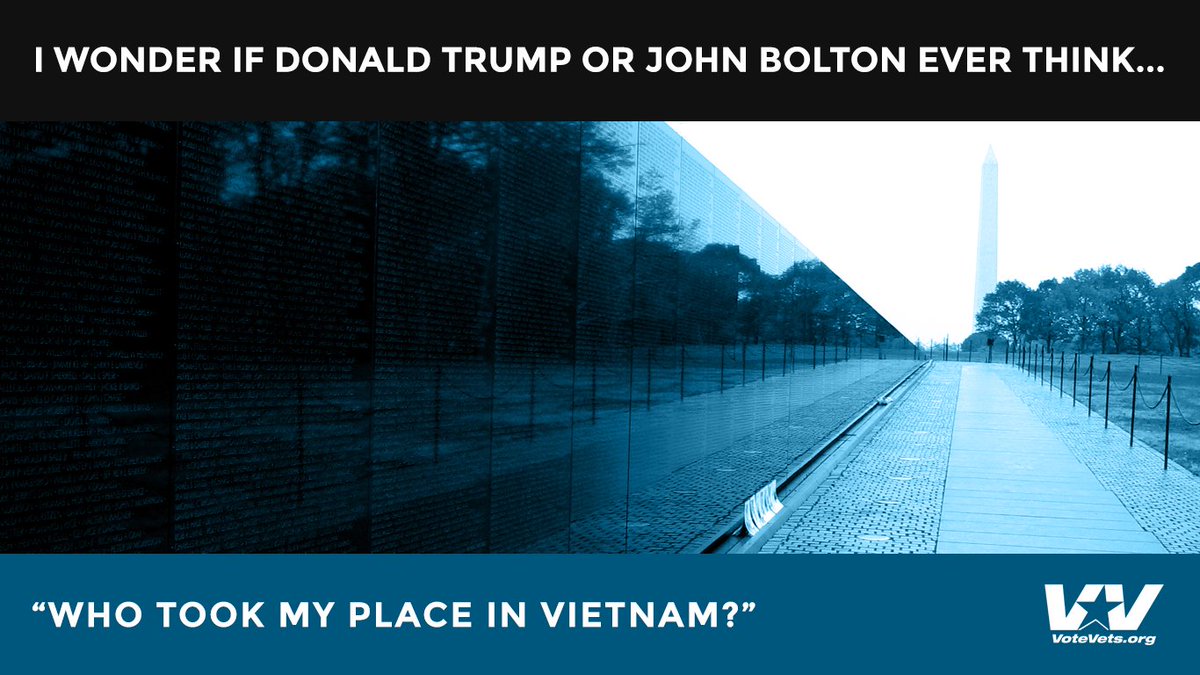 They do reTweet Vote Vets.

Vote Vets, you're welcome.  Speaking on behalf of myself and my friends who protested the war on Vietnam, you're welcome.  Do you ever wonder what we gave up?  Some of us -- Elaine and I did -- put our lives and our education on hold to make ending the Vietnam War our top priority.  And we're left to do the hard work again with Iraq while you sit on your fat ass doing nothing but electing War Hawks of the Democratic Party.  Do you ever get how many people are dead because you support War Hawks?

Jane Fonda did more to end the Iraq War than Hillary Clinton ever did.  Jane Fonda saved the lives of many Vietnamese civilians by exposing Nixon's bombings of the dikes.

Here's an effort from Joan Baez.  One of her efforts to get the word out and end the war.


Vote Vets has it's face firmly planted on its nuts and has confused the smell of their junk with the smell of liberty.

I'm really getting tired of the lying and the whoring that helps the wars continue.

[Lulu] GARCIA-NAVARRO: At the height of the war, there were almost 170,000 U.S. troops in Iraq trying to quell an insurgency and stabilize a country in the grips of a vicious civil conflict. And the U.S. is still involved in Iraq. Azmat Khan is a future of war fellow at the New America Foundation and a New York Times Magazine contributing writer. She joins us from New York to talk about Iraq, past and present. Welcome to the program.

GARCIA-NAVARRO: You touched on it there that the country fractured during the war in so many ways. But certainly, sectarianism was one of the big ways. There was Sunni, Shiite, Kurds, Christians. Is this even a country that still holds together?

KHAN: When the Americans arrived in Iraq, they often strategically worked with particular tribal groups on the ground - ones that had been disenfranchised under Saddam - and then found wealth and contracts and jobs under the Americans. And they played some of these groups against one another in an effort to sort of quell the insurgency that was spawned by this invasion. And what wound up happening is that you had these rivalries and rifts that have now become sectarian in nature, that perhaps weren't so sectarian to begin with but really became so with time.


GARCIA-NAVARRO: The U.S. is still involved in Iraq, fighting ISIS, even though Iraq declared victory over ISIS late last year.

Sinan Antoon (NYT via QUARTZ for those who don't want to give a click to the outlet that sold the illegal war):


No one knows for certain how many Iraqis have died as a result of the invasion 15 years ago. Some credible estimates put the number at more than one million. You can read that sentence again. The invasion of Iraq is often spoken of in the United States as a "blunder", or even a "colossal mistake". It was a crime. Those who perpetrated it are still at large.
Some of them have even been rehabilitated thanks to the horrors of Trumpism and a mostly amnesiac citizenry. (A year ago, I watched Mr. Bush on "The Ellen DeGeneres Show", dancing and talking about his paintings.) The pundits and "experts" who sold us the war still go on doing what they do.
I never thought that Iraq could ever be worse than it was during Saddamʹs reign, but that is what Americaʹs war achieved and bequeathed to Iraqis.

The Iraq War is a crime and a travesty and how shameful that Americans refuse to face up to what their government did and continues to do.  At a certain point, you have to accept that you either speak out regularly or you are giving your consent.  On Saturday, in many areas of the country, people gave their consent by navel gazing.  I'm really glad that MLK's granddaughter was able to be used as a prop -- keep them dream alive, right!  She's not mature enough to have any real thoughts but, hey, prop her up at a gun demonstration and let's pretend like that made a difference.  Let's even pretend that it makes up for the US government killing her grandfather while we're being delusional.

The Children's March risked much and made a difference.  Saturday's b.s. was corporate sponsored and corporate embraced.  The US government has always been thrilled when the spotlight was on anything but their own actions.  David Hogg doesn't know that because what does he know?  How to get highlights in his hair?  Well, that and how to get publicity for himself.  We saw that during Vietnam as well.  Various men like Tom Hayden who stepped forward to stand on the work of women and men of color.

David Hogg is the corporate and media's lovechild because he's not doing anything that really matters.  They pet him on the head like they did Mothers Against Drunk Driving.  Let David find the guts to take on the true killers -- the weapons makers, the 'defense' (assault) industry and suddenly the media stops fawning on him.

Then we start throwing you in prison.  That's what happened with nuns, remember?  Think I'm talking about the days of Bully Boy Bush?  Nope.


An 84-year-old nun was sentenced Tuesday to nearly three years in prison for breaking into a U.S. nuclear weapons complex and defacing a bunker holding bomb-grade uranium, a demonstration that exposed serious security flaws.
Two other activists who broke into the facility with Megan Rice were sentenced to more than five years in prison, in part because they had much longer criminal histories.


That was during Barack Obama's second term as president.  Nearly three years in prison for 'defacing a bunker.'

Again, David Hogg, color in your lines, be a good soldier, don't question the government or anything that really matters.  Keep reducing social issues to a narrative of personal irresponsibility and not a systemic issue and you will be applauded because you are doing nothing and are no real threat to the status quo.

You're a self-applauding piece of propaganda who makes no real change and who tackles no real issue.  Your being weak and ineffective is the very thing that allows the war makers to let the corporate media cover and embrace you.  In other words, you're a tool -- in every sense of the term.