Tuesday, April 10, 2018.  As May 12th elections approach, candidates attempt to shape their public images.  Oh, and look who War Hawk Anne Marie Slaughter is trotting out. 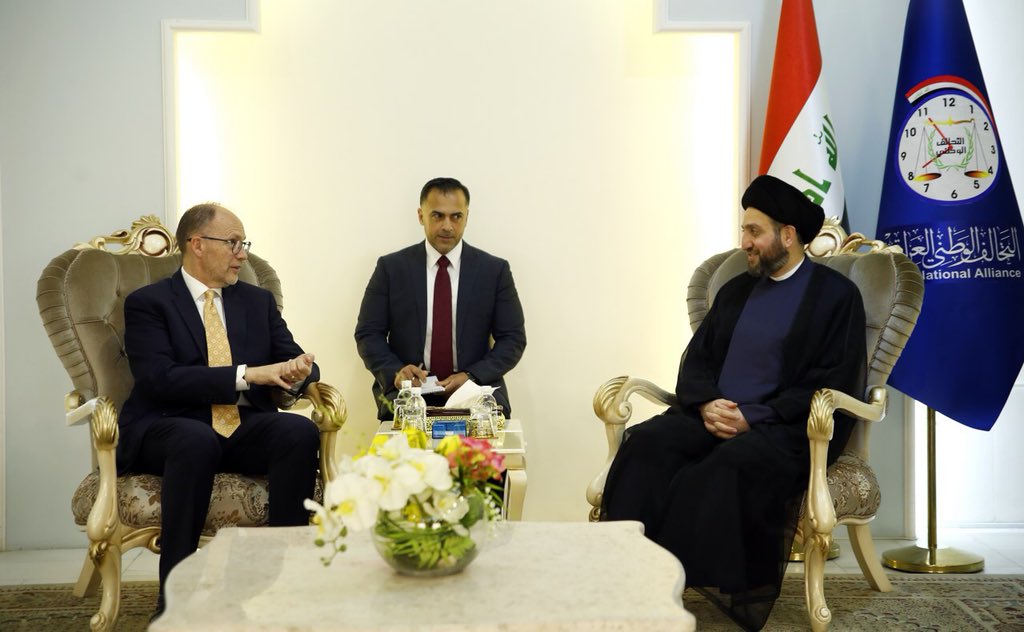 ALSUMARIA reports that Ammar al-Hakim met with US Ambassador to Iraq Doug Silliman today (see photos above). Ammar al-Hakim leads the National Alliance (Shi'ite group).  Ammar called for a move away from sectarian differences to a cohesive unity.  This meet up follows an earlier one with the British Ambassador.


Meet ups are important right now.  It's the lead up to the May 12th elections and being able to point to a meeting with some foreign official might -- a candidate hopes -- leave an impression on Iraqi voters.

If you have no meet up with a foreign official?

Iraq's Vice President Tweets about meeting up with Saleh al-Mutlaq.  Though both are Sunni, al-Mutlaq's remains a questionable figure with Sunnis.  In fact, he's campaigning more carefully -- locations are selected with great care -- due the fact that his more prominent appearances in recent years were accompanied by booing and jeering and, in one case, thrown rocks and bottles.  It's surprising Saleh could get a high profile meet-up like that even though both men are Sunnis.  Osama is the most powerful Sunni official in Iraq as a vice president.  He previously served as Speaker of Parliament.  His brother is Atheel al-Nujaifi, the former Governor of Nineveh Province.  Earlier this year, KURDISTAN 24 reported:


An Iraqi court sentenced in absentia the former Governor of Nineveh Province, Atheel al-Nujaifi, to three years of imprisonment and banned him from traveling abroad as well as seized his assets.
Iraqi judicial authorities issued an arrest warrant against Nujaifi, the brother of the current Vice-President of Iraq, Osama al-Nujaifi, on charges of “communicating” and “collaborating” with Turkey.
The Iraqi Parliament in May 2015 removed Nujaifi from his post as the Governor of Nineveh following the fall of Mosul and the province into the hands of the Islamic State (IS) in mid-2014.
Nujaifi leads the Nineveh Guard, which consists of volunteers who previously served as officers and soldiers in the Iraqi army and who were later trained by Turkish troops in a camp on the outskirts of Mosul to fight the jihadist group.

Whether the move was warranted or not is up to debate -- as is anything with regards to 'legality' in Iraq.

How much of a joke is the rule of law in Iraq?  Even Raghad Hussein mocks it today.  As reported by ALSUMARIA, the daughter of Saddam Hussein, notes that "there is a flagrant violation of laws in Iraq."  Raghad resides in Jordan where she is under the protection of the royal family there.  Iraq continues to insist that she is part of the insurgency -- an assertion that she denies -- and they have put her on their most wanted list.  ALSUMARIA quotes Raghad declaring the day will come where she will sue various people/entities.  One wonders if that would include the US government?  Would Raghad have legal standing -- in world courts or US courts -- as the daughter of Iraq's former leader to sue the US over a war built on lies?

As DEUTSCHE WELLE noted this week in a piece entitled "The Iraq War: in the beginning was the lie:"


On April 9, 2003, US soldiers toppled the statue of Saddam Hussein in Baghdad. Fifteen years later we know that this war cost hundreds of thousands of lives, plunged the Middle East into chaos — and was based on lies.


Returning to Osama al-Nujaifi for a moment more, KURDISTAN 24 reports:

Iraqi Vice-President Osama al-Nujaifi warned on Monday towards adopting the precept of “majority rule” as a substitute for the system of power-sharing in place because the fall of the previous regime in 2003.
“Majority rule,” many Iraq politicians say, is a thinly-veiled euphemism for “Shia rule,” as Iraq is likely one of the few nations with a Shia Muslim majority.
Nujaifi, a former Speaker of the Iraqi Parliament and distinguished Sunni politician, shares the view not too long ago voiced by Kurdish officers that widespread acceptance of the idea would profit one get together or sect on the expense of others in Iraq’s multi-ethnic and multi-religious society.


Iraq remains a failed state and if a candidate admitted that publicly, they might get a strong reception from voters.

Instead, they focus on photo ops.  One photo op many candidates would like would be one with Grand Ayatollah Ali al-Sistani; however, the Shi'ite cleric does not participate in personal political campaigns.  He does use his authority to make general calls and he's made one call already this month.


The prime minister of Iraq is scrambling for anything to use to prove he's worthy of holding the post for four more years.  So, even though the profile was far from flattering, Hayder al-Abadi thinks the TIME magazine coverage was impressive enough -- being covered by TIME -- to make it his pinned Tweet for a month now.


Any nit-wit can Tweet, as Anne Marie Slaughter makes clear.  The War Hawk is offensive all on her own but check out this Tweet.

-Marie . Slaughter anneVerifiedAccount @ SlaughterAM
. @ nirrosen : no more appetite for Sunni-Shia war in Iraq. "Iraq is the only democracy in the Middle East." ISIS presence no longer threatening to the Iraqi order; 3000 Sunni candidates in the elections. Saudis have accepted the new Iraq. @ NewAmerica # Futureofwar
12:43 PM - 9 Apr 2018
1 reply3 retweets4 likes


I'm sorry, does anyone take Nir Rosen seriously?  He imploded, or have we forgotten.  He made homophobic comments about Anderson Cooper and made jokes about the assault on Lara Logan.  That's just for starters.  Why in the world is piece of scum Anne Marie quoting him?  Yes, she is scum but it's also true that she tries to pretend she's a feminist.

If she's quoting him correctly, he's even more insane than he was during his meltdown.  Iraq is not a democracy.  Rosen was speaking yesterday at Arizona State University proving some people will host anyone.  (He was part of a war conference.)