Kat:  "We never learned to keep our voices down, no, we only learned to shout, so we fight our way in,"  Chris Carrabba announces on "We Fight," the opener to Dashboard Confessional's CROOKED SHADOWS album. 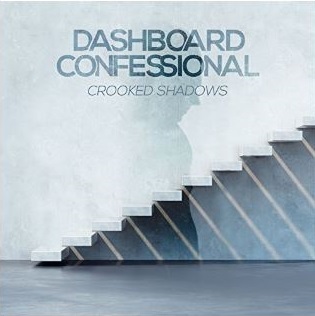 For some Dashboard conjures memories of unity in the dark halls of music clubs or the dark walls of your own room.

That feeling of isolated communion is as evident in "Catch You" as the incredible drumming.

When Dashboard Confessional really cooks, it's the best gumbo on the stove's front burner.

For me, CROOKED SHADOWS was about stomped on joy and a disregard for music about avoidance and anger.

And that had nothing to do with the group or the album.

It was February 17th and the new album was about a week old.  I loved it.  Everyone I knew loved it.  It was a Saturday and, come Sunday, I'd be writing a rave on it.  Right after this wedding was over.

See my friend Sumner was getting married.  Maggie was there, Dak-Ho, Toni and so many more.  It was a cute ceremony (I'm trying to be kind -- or what passes for it from me).  The bride looked . . . interesting.

Toni had just come from the receiving line and wanted to know, "Where's that ____ from?"

Was it a French accent?  Australian?  Italian?  Who was this crazy?  Tina Arena?

Yorba Linda, I explained.  I'd already been told that despite -- or because of -- the woman's heavily affected accent, she was actually born in and grew up in Yorba Linda.  I kind of pictured her using that ridiculous speaking voice as she walked tour groups through The Richard Nixon Presidential Library and Museum.

When I went through the receiving line, she'd introduced herself to me as a "college professor" which probably made many think of universities and advanced education but, turns out, she was just a community junior college instructor who barely had a B.A. -- apparently she majored in snobbery with a minor in bitchy.

That became clear when the music started playing.  No, I had nothing to do with the selection.  That was left to Sumner's best man (also his younger brother).  Whether it was Atlantic Starr, Sting, Bruno Mars, Sade, Whitney Houston or Pharrell, Bridezilla looked glum and grim.  When Dashboard Confessional's "Stolen" came on, she exited the dance area with a "Oh, hell no."

What followed was a loud, ten minute diatribe directed at -- and spat at -- Sumner's brother in front of one and all.

Apparently Bridezilla missed Lil' Wayne explaining the basic meal plan of his gal ("All she ever eat is dick") or Eminem explaining how to handle a bad relationship ("I got 99 problems and a bitch ain't one, she's all 99 of 'em, I need a machine gun") let alone DMX breaking it down ("Tryin to send the bitch back to her maker, and if you got a daughter older then 15, I'mma rape her, take her on the living room floor, right there in front of you, then ask you seriously, whatchu wanna do?") -- to cite but a few.

On and on she went about how Dashboard Confessional presented an idealized and superficial woman in every one of their songs.

First off, while not the best way to do a character study, it's equally true that there is far worse than idealized and superficial -- unless you think DMX raping your daughter "on the living room floor" is just another way of saying, "Howdy neighbor!"  Second, we do get what emo is, right?  It's an exploration of self.  Everyone but the self will be secondary in an emo song.  That's just how it is.  What is emo but the Temple of Apollo at Delphi with a backbeat ("Know thyself and thou shalt know the universe and the gods")?

Did I say any of that to Bridezella?

Hell, I didn't even say it to Sumner.  I just bit my tongue knowing these things tend to work themselves out and put my plan to review CROOKED SHADOWS on hold.

"Heart Beat Here" may be the strongest track of all


And I can write that and the above because it's true.  Also true, Sumner filed for divorce last week.  Some things -- like good music -- last while other things -- like bad relationships -- die out.  Or, as Chris sings on track eight, "I know, gonna be alright."