Let's start with this graph.

Some critics are challenging my global projections on Iraq future Government and Iran influence. Fine: do your maths... 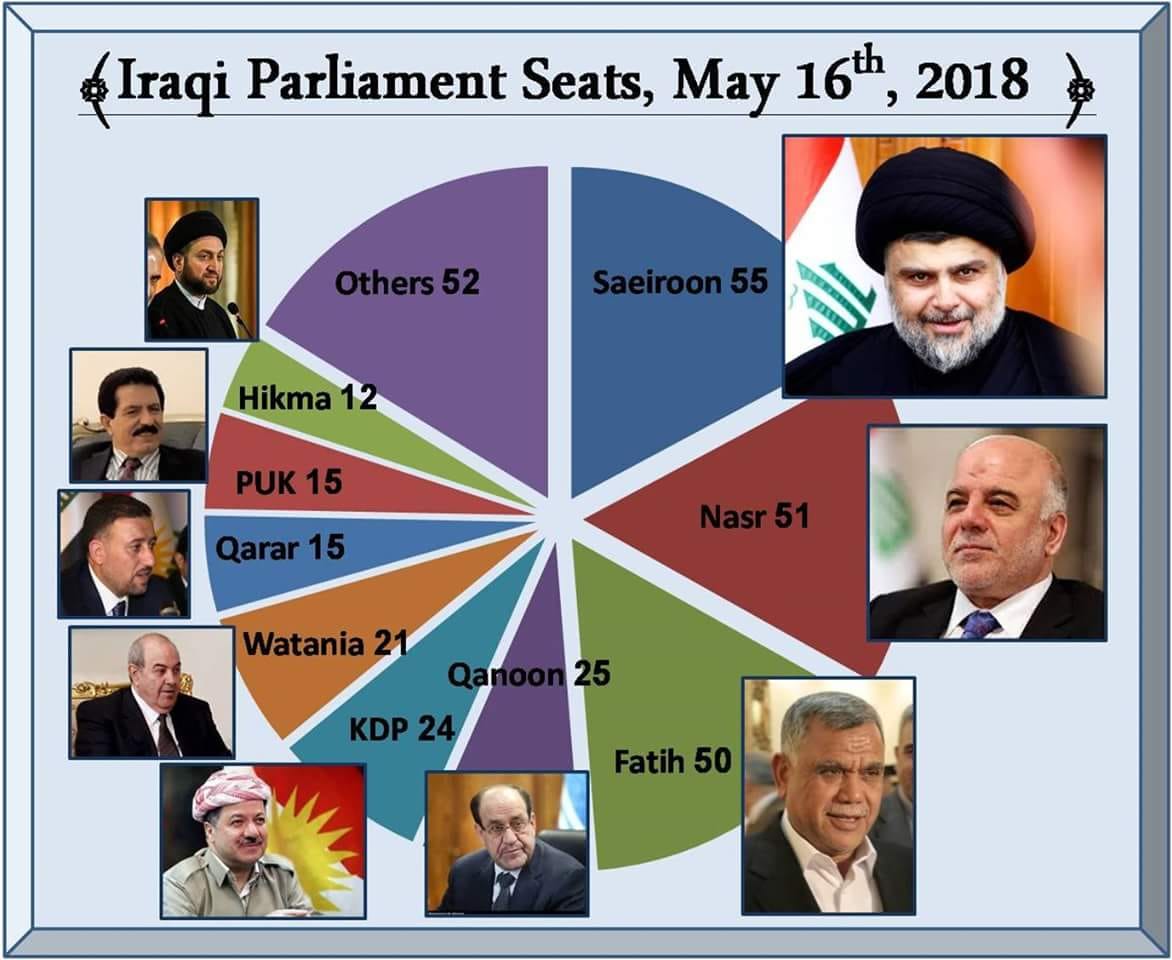 
So we have photos and percentages of the vote.  What does this have to do with Iran?

First of all, Iran shares a border with Iraq.  They are neighbors, there will be influence, that's a given.

Second, the faces are not new.  Except for Faith with their 50%, all the above have been running each cycle.  Faith is the militias and they are indebted to the government of Iran, I don't disagree, but I don't know what a graph like that is supposed to prove.  The only person who might be against Iran -- against -- above is Ayad Allawi and that's due to the 2010 election which isn't a detail the graph above goes into.  Nor does the PUK's 15% note that Hero Talabani regularly visited Iran while her husband (then-president Jalal Talabani) was unable to speak or move but they were concealling that (for 18 months) from the Iraqi people.

Iran will have influence, it's a neighbor.

It's influence, by some western observers, is always seen as sinister.  The US interest is seen as benign by the same observers.  I'd argue that both judgments overdue it.


QUESTION: Yeah. On Iraq and the Iraqi – and the parliamentary elections. Do you have any comment?

MS NAUERT: Yeah. I think it’s certainly notable, first of all, that Iraq held elections that were largely free of violence. Imagine, think about not long ago, ISIS had controlled large swaths of that country. And the fact that they were able to pull off elections that were relatively free of violence is certainly a pretty amazing feat and a testament to the Iraqi people. We congratulate Iraq and the Iraqi people for participating in the democratic process yet once again. Iraqis are certainly eager to build a safe and prosperous future for themselves in the context of a government that’s sovereign and stable. So we’d like to congratulate them for doing that.

QUESTION: I have two more on this, Heather. Do you have any comment on Moqtada al-Sadr, who emerged as the big winner in these elections?

QUESTION: Is Brett McGurk – is he still --

QUESTION: Are you concerned --

QUESTION: Is Brett McGurk there for the talks along relations to the elections?

MS NAUERT: I can confirm he is in Iraq right now; I don’t have the details of his entire itinerary and why he’s there. I can see if I can get more for you on that. Okay. Hey, Laurie.

QUESTION: And also some are – one more here.

QUESTION: And also, some of the political parties are charging that the election was rigged by groups in – that were probably backed by Iran. Do you have any comment on that?

MS NAUERT: Yeah. I can just say the Independent High Electoral Commission – that’s basically the Iraqi equivalent of the Federal Election Commission – they are investigating; they are taking a close look at allegations of fraud and intimidation. There were civil society observers who were participants or who – involved in watching the process. And there were also international observers who were on the ground as well, and they have reported to us that they found the elections to be credible. Okay.

QUESTION: What do you see as next steps in this political process? And are you concerned that if it takes too long that there may be a resurgence of Islamic State or other insecurity?

QUESTION: And you’re comfortable that the leading two party lists include people who were opposed to the United States presence in Iraq up to 2011?

MS NAUERT: We are very well aware of Moqtada al-Sadr and his background and his positions now, yes.

MS NAUERT: I don’t have any information on the so-called list that you mentioned.

QUESTION: They were number two.


MS NAUERT: Okay. I don’t have any information on that, Laurie. I’ll see if I have anything more.

'The State Dept is not clutching the pearls over Moqtada's victory.  Nor is former US Ambassador to Iraq Zalmay Khalilzad.  NPR's Mary Kelly spoke with him this week for ALL THINGS CONSIDERED:


KELLY: Right. He has refashioned himself, reinvented himself as a crusader against corruption. And I want to ask you, do you believe this is a sincere transformation?

KHALILZAD: Well, it is possible he has evolved. He was against the political process, at one point resorted to military force. We fought him. He thought the U.S. occupation was a mistake, that we had said we had come for liberation and we ended up occupying Iraq. And now embracing the political process and participating in it at one level can be seen as a success because if someone who was a warrior now becomes a politician, that is itself a positive development.

KELLY: But this - he wasn't just a warrior. He has blood on his hands for the deaths of U.S. soldiers, many U.S. soldiers. How do you reconcile that person with a man who may now hold the reins of power in Iraq?

KHALILZAD: Well, of course you're right about that. He does have the blood of American soldiers on his hand. And we killed a lot of his people. We were on the verge of killing him when Ayatollah al-Sistani intervened. And...

KELLY: Ayatollah al-Sistani, the most senior Shiite cleric in Iraq.

KHALILZAD: Indeed. And arranged for him, for Muqtada, to leave Iraq and go to Iran for a while. But now he says he has changed. He is improving relations with the Middle Eastern countries. He's participating in the political process. He's even saying politicians should not be in government, they should control the government from Parliament, that technocrats should address the issues of concern to the people. So perhaps he is on a journey from becoming a militant fighter to becoming a political leader. And if that truly happens, it will be positive because that's the definition of success - to turn enemies into constructive partners.

KELLY: You sound, Ambassador Khalilzad, cautiously optimistic about the way this vote appears to be turning out. And I guess that surprises me a little bit given this is not an outcome the U.S. would have predicted, certainly not one that the U.S. would have hoped for back in the days when you were ambassador to Baghdad.

We'll note some of Moqtada's history via this series of Tweets:

Ali علي‏ @Alii_iii
Tired of seeing people trying to re-invent the image of a tyrannical madman. A man known for violence, corruption & sectarianism. In 2007, the Mahdi Army replaced Al-Qaeda as the most dangerous accelerant of potentially self-sustaining sectarian violence in Iraq. THREAD


Lastly, at approximately 6:02 a.m. EST, THE NEW YORK TIMES published a column by THE NATIONAL's Mina al-Oraibi.  Strange, they've never been interested in Mina's opinion before.  But THE NEW YORK TIMES, as Gore Vidal used to note repeatedly, is the voice of the US State Dept.  Strange that the paper of a bad record finally notices Mina when she's claiming -- with no evidence to back her up -- that Moqtada will form an alliance with Hayder al-Abadi.  Very strange.  Dropping back to yesterday's snapshot:

The US State Dept is starting a whisper campaign that Moqtada will side with Hayder so Hayder can have a second term -- that is what the US government wants.  But there's no indication that this is what Moqtada would want or support.  Watch the press to see who presents that US government created rumor as word that's supposedly developing in Iraq -- it's not brewing in Iraq.  They hope they can plant it in Iraq and have it pick up speed but it's a US created rumor with no current basis in fact.

Imagine that.  The State Dept, as we noted yesterday, was attempting to spread a false rumor in the hopes that it would make the rumor come true, force Moqtada to go along with the rumor, maybe pick up popular support for the rumor.  Mina just happens to present the rumor as fact in her piece and suddenly THE NEW YORK TIMES is interested in her.

Strange how that worked.


165 seats in Parliament.  That's how many are needed to become prime minister.  Moqtada does not need to form an alliance with Hayder to achieve that.  He has 55 seats right now (if the current count holds).  He could, for example, go with the minor parties that won 52 seats (classified as "other" in the chart we noted at the top of the snapshot).  That puts him at 107 and he needs 58 more seats.  He could align with Ayad Allawi (as he did in the move to have a no confidence vote on then-prime minister Nouri al-Maliki) and the KDP (ibid) and that would give him 45 seats.  Take on the PUK and he's got 15 more and more than enough to form the coalition government.

That would allow him to avoid third place Hayder (who is seen as inept when it comes to fighting corruption -- the issue that determined this election cycle), to avoid Hadi al-Ameri (who I don't believe he is as at odds with as the press tries to play up) and Nouri al-Maliki (who is corrupt and a real foe of Moqtada's).

The scenario in the second paragraph above is only one way he could avoid forming a coalition with Hayder.  There are many other ways he could do so.