Kat: I'm digging through my highly disorganized jewelry box -- not an item that will bring you value at any pawn show, I assure you -- when I pull out a silver key chain at the bottom.  It's engraved: "Between a laugh and a tear and that's as good as it can get for us and there ain't no reason to stop trying."  It made me remember two things -- the guy who gave me the key chain and John Mellencamp's SCARECROW. 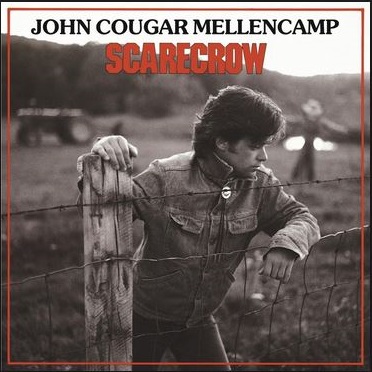 See, the quote is from a song ("Between A Laugh And A Tear") on that album.

But you can't start with that album, you have to start with Bruce Springsteen.

Before he became Broadway Brucie, la Springsteen was seen as something of an artist.  BORN IN THE USA followed THE RIVER and NEBRASKA -- two artistic high points.  BORN was more of a commercial high point -- no one would mistake "Dancing In The Dark" -- or most of the tracks on the album -- for political.  But there was Brucie babbling on to ROLLING STONE constantly so there was the music he made and there was the myth of Springsteen.

The music?  After TUNNEL OF LOVE it was one long gutter ball until  THE RISING and it's been nothing but a gutter ball ever since.

But the myth did exist, once upon a time.  And it did inspire a lot of artists, including young ones like Bryan Adams, the sexy Corey Hart* and Melissa Etheridge as well as older ones such as John Fogerty.  I think the myth helped Corey Hart -- and got him, belatedly, some strong critical reaction from ROLLING STONE.  But the others?  Not really.  Melissa's become a male impersonator on album after album as she tries to prove she's Bruce.  Bryan had a nice voice and a nice way with melodies but trying to meet the myth of political Bruce robbed him of every strength he had as a song writer (see INTO THE FIRE).  And poor John, CENTERFIELD had returned him to radio.  His attempt to match the Bruce of myth led to the near career destroying EYE OF THE ZOMBIE.

But it was a myth.  "My Hometown" and "Born In The USA" were the only political tracks on Bruce's 'political' album.  And the title track itself was about a war that had ended nearly a decade prior.

In interviews, Brucie loved to make pronouncements but grasp that he really did damn little politically.

Go down that list in vain looking for Bruce Springsteen.  In fact, he didn't even pull a Grateful Dead and appear via satellite -- as the Dead did twice.

Both of those appeared on UH-HUH, the album before SCARECROW.  Those two and the two that followed (THE LONESOME JUBILEE and BIG DADDY) are probably the zenith of Mellencamp's recording career.  There's no filler on any of the four albums and they hit hard at society and at the individual -- on the latter, that's John Mellencamp himself.


With that song alone, the title track, Mellencamp went beyond anything Bruce would ever do -- heck, John entered the land of Woody Guthrie with that song alone. Another track, one of the big hits, was "Smalltown:"

No, I cannot forget where it is that I come from
I cannot forget the people who love me
Yeah, I can be myself here in this small town
And people let me be just what I want to be
Got nothing against a big town
Still hayseed enough to say
Look who's in the big town
But my bed is in a small town
Oh, and that's good enough for me

The album came out in 1985. If it had come out in 1987 or later, people might have said he was singing about L.A. Bruce.  Largely forgotten now, Bruce was all about celebrity and being a solo act -- bye, bye E. Street Band -- and leaving New Jersey.


The other two big hits on the album are the rousing "R.O.C.K. In The USA" and the beautiful "Lonely Ol' Night." But, again, no filler. And some of the best songs on the album were never singles. Yes, we're back to the key chain.

In all the time since 1985, SCARECROW has only become an album I appreciate even more and I think that's true for anyone who discovers or rediscovers it today.  Yes, Bruce Springsteen finally, like Barbra Streisand, has his (non-competitive) Tony Award.  Now he can traipse on down the Stoney End -- while claiming he never wanted to go, he never wanted to down the Stoney End.** But in terms of music, and especially in terms of great music, it's John Mellencamp that has the legacy.

*I don't think I've referenced my 80s one night stand with Corey yet this year so let me plug it now -- Corey was hotter than hot, fantastic in bed.  We were on an island, as Diana Ross might say.

** Barbra never wanted to sing, never wanted to sing "Stoney End."  She waited until after she pimped it like crazy to make it a hit.  She waited until after the songwriter, Laura Nyro, was dead.  Now Peggy Lipton made the song all her own when she recorded it.  But Babs?  I believe it was Michael Douglas who first called Babs' version a rip-off and pointed out that she did a note-by-note copy of Laura's version.  Barbra got her first top ten hit back in 1964 with "People."  Five years later, she'd finally hit the top ten again with "Stoney End."  But, hey, go ahead and piss on the fans, right?  Remember, see C.I.'s review of Sally Field's IN PIECES, Sally Field appreciates Laura Nyro while Babs mocks her.