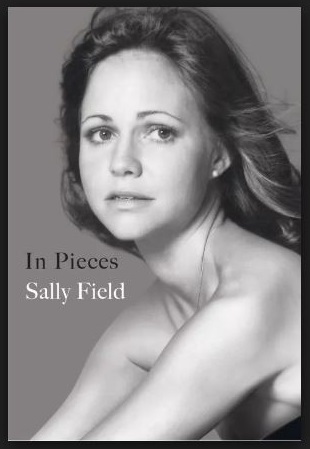 There's no way she will ever top IN PIECES.  It's not a book, it's a laceration, a wound. a scar.

Though early press focused on her portrayal of one-time love and co-star Burt Reynolds, the portrayal is not as sensational as the press made it out to be.  More to the point, no one gets treated rougher in Sally's book than Sally Field herself.

I get a lot of books sent to me by friends in publishing.  Most often, the books are galleys.  But I do get a number sent in the final product version, as I did with Sally's book.  I've carried IN PIECES around for a few weeks on the road, unsure if I even wanted to read it.  I gave it the one-quick-look test where you open at random to one section and see if there's any reason to read it?  I happened to open on Sally Field at her apartment with her sister singing Laura Nyro at the top of their lungs.

That's all it took.  After so many -- too many to list -- books by women in the last ten years that gave shout outs to one male talent or 'talent' after another but never managed to note other women, the Laura Nyro sentence was more than enough.

I'd held off, in part, from reading the book because I know Sally and have known her for years.  We're friends in that vauge way that you've bumped into each other for years at functions and mutual friends homes and so, whether you would have made the effort to develop a friendship or not, you've both had it forced onto you.  We've had many superficial conversations and a number of deep ones.  My big worry about the book was that I'd really hate it.

I can't imagine anyone hating IN PIECES.  I can imagine them gasping from page to page.  The book is a shocker.  Not in the sense that some found Shirley MacLaine's MY LUCKY STARS (a book worth reading and the manufactured outrage over it said more about the industry than it did about what Shirley actually wrote), but in the sense that we don't see books like this.

We see books, autobiographies  -- very often -- that pile the blame on someone else and they're considered scathing by some.  Or there are the autobiographies that you trudge through and wonder how anyone could put their name to it?

Did Sally have a ghost writer?

I don't believe so.  The book reads like her -- both the way she speaks and the way she writes in letters.

She's written a book to be proud of.  She questions her own actions, her own judgments.  If there's a person to blame in the book, for Sally, over and over, it's herself.

At one point, she notes her journals and her disappointment, when reading over them much later, that she doesn't come across a Virginia Woolf or an Anais Nin.  That may be true but she's written a fascinating memoir that's like nothing anyone's turned out in the last century.  It's a fascinating book.

Sally's won two Academy Awards and three Emmys.  Her acting has won her admiration and a strong following.  Anyone hoping she relives the acting performances may be disappointed.  The book continues a recent trend of writing half-a-book.  Chrissie Hynde and Carly Simon are only two authors who've done that recently -- and they also did it successfully.  If you're interested in her path as an actress, her quest for richer and richer performances, there's much IN PIECES has to offer -- including Madeline Sherwood introducing her to The Actors Studio and the times when she found the moment in a performance.  But if you're looking for specific performances?  With the early TV career (GIDGET, THE FLYING NUN, THE GIRL WITH SOMETHING EXTRA, and SYBIL), you'll probably be okay. But there's really nothing on ER and basically just one sentence on BROTHERS & SISTERS.   If you're looking for a discussion on her movies, you'll be less satisfied.  With the exception of LINCOLN (Sally gave an Academy Award nominated performance), NORMA RAE really is the last film she's recounting in the book.

A second book could lead her to discuss, for example, PLACES OF THE HEART, STEEL MAGNOLIAS, SOAPDISH, MRS. DOUBTFIRE and maybe DYING YOUNG (which she produced but did not act in).  But would a second book really further the story?

Probably not.  When I first met Sally years and years ago,  she didn't seem 'there.'  I'm not talking about stupid.  She's always been much smarter than she's realized.  I'm saying that the person sitting next to you or across from you was a shell or a hull.  And there's a story I've told over the years (in person many times but online only once -- at THIRD) which doesn't portray her in a good light.

Sally's rebuttal is this book which makes clear that she often was a shell.  She was trying to get through, just make it through.  She explains and details that.  It's more than the easy answer -- what happened to her as a child.  You could argue it was her searching her craft but that's not really it either.  It's a story many can relate to -- women and men -- of being placed into a box but knowing you don't fit in that box while also knowing that leaving that box might mean losing love or at least approval.  When you try to be something for everyone else, you struggle with identity.  ,

And whether it's altering herself to meet Burt Reynold's expectations of what and who a woman should be or trying to fit into SCREEN GEMS vice-president (and former child actor) Jackie Cooper's notion of what a TV star should be, Sally's struggling as much as she is to have conversations with those closest to her.  With her mother, for example, authenticity can come in a burst, such as tossing a drink, but she has much more difficulty discussing what she wants to and needs to.  There's also a barrier with between Sally and her first husband that leads to the collapse of that marriage.  In her book, she explores these barriers, holds herself accountable for them.  She strives for more, to be more, to express more, to feel more.

Sally conveys that struggle and wins it -- yes, the book is proof but so is her relationship with her three sons.  IN PIECES is a great read, absolutely, but it's also a brave write and she really deserves credit for going so deep and not shying away -- even more credit for writing about the rabbit hole in a manner that brings us into it with her.  She generously shares the journey.

If a friend sat across from you having this conversation, you'd probably want to reach over and counsel they practice a little forgiveness for themselves.  And you'd be right to.  But when someone does this in a book, your reaction should be more than that.  You should marvel over how deeply they've dug and how they have laid themselves bare.

Here for AMAZON, here for BARNES & NOBLE or check out a physical store located in your own area.