J.P. Lawrence (STARS AND STRIPES) reports, "Afghanistan became the world’s deadliest terrorism hot spot in 2017, due to the escalation of the war and fewer incidents elsewhere, a new report said. [. . .] Iraq had been the deadliest country for terrorism since 2012, when the top spot belonged to Afghanistan."  So the top spot rotates between Iraq and Afghanistan and, since the summer, the corporate press has been slowly noting that -- despite the hype and despite then-prime minister Hayder al-Abadi swearing in December 2017 that ISIS had been vanquished -- ISIS remains in Iraq and has regrouped.  Jonathan Spyer (WALL STREET JOURNAL) reports the terrorist group has a strong presence in "the Qara Chokh mountain range in northern Iraq" and that "the terror group isn't finished."  From Wednesday's ALL THINGS CONSIDERED (NPR):


AILSA CHANG, HOST:
The Iraqi and U.S. militaries are stepping up operations in Iraq against ISIS. Yes, the militants were driven out of Iraq's cities a year ago and were largely defeated. But since then, some have dug into remote areas in the mountains. NPR's Jane Arraf went out with Iraqi forces in northern Iraq.
(SOUNDBITE OF DRONE BEEPING)
JANE ARRAF, BYLINE: An Iraqi army officer has just launched a drone. They're looking for ISIS fighters here in the Badush mountains in northern Iraq. The mountains are dotted with dozens of man-made tunnels. A lot of them are more than 300 feet long and as wide as a house. The military says ISIS sleeper cells are there.
GENERAL RASHEED ABID RASHEED: (Foreign language spoken).
ARRAF: General Rasheed Abid Rasheed is standing on a ridge briefing the commanding general, Nijm al Jabouri, on what his troops are doing.
RASHEED: (Through interpreter) We demolished most of the tunnels, but some, after we destroy them, they open them up again.
(SOUNDBITE OF DOGS BARKING)

ARRAF: Just down the mountain, there are sheep grazing on the grass. Dogs bark at the passing military convoy. It looks idyllic here, but a lot of ISIS members came from the villages around here. And a few days ago, an Iraqi soldier was killed by an ISIS fighter in one of the tunnels they're trying to destroy.

A recent US defence department report said an effective clandestine Islamic State organisation “appears to be taking hold”, four years after the group controlled swaths of Syria, as much as a third of Iraq, and declared a caliphate.
A suspected Islamic State roadside bomb in Mosul killed at least three schoolchildren late last month and a car bomb killed at least five people in the city of Tikrit in mid-November. Attacks in oil-rich Kirkuk province so far this year have more than doubled from 2017, according to the Washington-based Center for Strategic and International Studies.


Between 2014 and 2017 Islamic State, also known as Isis, was driven out of areas it controlled in Iraq by the western-backed Iraqi army alongside Kurdish forces and Shia militias, many supported by Iran. Western jets also pounded Isis-held territory, reducing swaths of cities to rubble.


This week also saw a US service member sentenced to 25 years imprisonment for attempting to aid ISIS.  AP reports, "Sgt. 1st Class Ikaika Kang, 35, pleaded guilty in August to four counts of attempting to provide material support to a foreign terrorist organization. He provided classified military documents, a drone and other help, he said."

Also this week, Hassan Hassan had a piece at THE ATLANTIC where he fantasized about the roots of ISIS -- he's sure he's come up with big news.  All he did was read ISIS propaganda put out by ISIS and, hey, why not.  When did a press release ever lie?  His Twitter summary made more sense than the article so let's note that.

Hassan Hassan‏Verified account @hxhassan
I got hold of a 93-page ISIS document chronicling the life of an ISIS leader AND the jihadi landscape in 1990s-2000s Iraq. Fascinating details show that Zarqawi was not at all the creator of ISIS: https://www.theatlantic.com/ideas/archive/2018/11/isis-origins-anbari-zarqawi/577030/ … via @TheAtlantic
4:31 AM - 30 Nov 2018
34 replies769 retweets1,412 likes


As he rushes to dash through press releases from a terrorist group (in the cradle, did he teethe on missives from the Symbionese Liberation Army?), he and many others ignore the more important issue of ISIS.  Right or wrong, a number of people in the Middle East believe the US government created ISIS -- intentionally, not by blowback -- and that they funded and continue to fund it.  Is that true?  I have no idea.  But if you're writing lengthy ATLANTIC articles, you might try focusing on a topic that actually matters and that one matters because it goes to how the nation is perceived in the Middle East.  Writers who reduce it, however, to trading baseball cards?  Their work really doesn't have any impact outside their own private circle jerk.


Brian Castner (WIRED) noted, in 2017,  how US arms kept ending up with ISIS and that "According to a July 19, 2017, report in The Washington Post, the US government secretly trained and armed Syrian rebels from 2013 until mid-2017, at which point the Trump administration discontinued the program—in part over fears that US weapons were ending up in the wrong hands."  At the same time, Bethan McKernan (INDEPENDENT) noted, "An extensive field investigation into the origins of Isis’ weaponry in Syria and Iraq has found that weapons supplied by the US and Saudi Arabia to the Syrian opposition often ended up in the jihadis’ hands, enhancing the 'quantity and quality' of their armaments."  As US House Rep Tulsi Gabbard observed, "This isn't a matter of giving weapons to people, but they end up falling into the wrong hands. We are directly arming militants who are working under the command of al-Qaeda, all in this effort to overthrow the Syrian government."  Tulsi sponsored the Stop Funding Terrorism bill and noted:

Under U.S. law it is illegal for any American to provide money or assistance to al-Qaeda, ISIS or other terrorist groups. If an American citizen gave money, weapons or support to al-Qaeda or ISIS, he or she would be thrown in jail. Yet the U.S. government has been violating this law for years, quietly supporting allies and partners of al-Qaeda, ISIL, Jabhat Fateh al Sham and other terrorist groups with money, weapons, and intelligence support, in their fight to overthrow the Syrian government. The CIA has also been funneling weapons and money through Saudi Arabia, Turkey, Qatar and others who provide direct and indirect support to groups like ISIS and al-Qaeda. This support has allowed al-Qaeda and their fellow terrorist organizations to establish strongholds throughout Syria, including in Aleppo.
A recent New York Times article confirmed that ‘rebel groups’ supported by the U.S. ‘have entered into battlefield alliances with the affiliate of al-Qaeda in Syria, formerly known as al Nusra.’ This alliance has rendered the phrase ‘moderate rebels’ meaningless. Reports confirm that ‘every armed anti-Assad organization unit in those provinces [of Idlib and Aleppo] is engaged in a military structure controlled by [al-Qaeda’s] Nusra militants.’

A recent Wall Street Journal article reported that many rebel groups are ‘doubling down on their alliance’ with al Nusra. Some rebel groups are renewing their alliance, while others, like Nour al-Din al-Zinki, a former CIA-backed group and one of the largest factions in Aleppo are joining for the first time. “The Syria Conquest Front—formerly known as the al-Qaeda-linked Nusra Front—is deeply intermingled with armed opposition groups of all stripes across Syria’s battlefields.”
The CIA has long been supporting a group called Fursan al Haqq, providing them with salaries, weapons and support, including surface to air missiles.  This group is cooperating with and fighting alongside an al-Qaeda affiliated group trying to overthrow the Syrian government. The Levant Front is another so-called moderate umbrella group of Syrian opposition fighters. Over the past year, the United States has been working with Turkey to give this group intelligence support and other forms of military assistance. This group has joined forces with al-Qaeda’s offshoot group in Syria.

This madness must end. We must stop arming terrorists.

The American people have felt directly the cost of our nation's interventionist wars—costs borne by our nation's sons and daughters who have served, and by communities and people in every part of this country. We have spent trillions of dollars on regime change wars in the Middle East while communities like Hawaiʻi face a severe lack of affordable housing, aging infrastructure, the need to invest in education, health care, and so much more.

US troops remain in Iraq.  Why?

The Iraqi Parliament has yet again noted -- as it does nearly every year -- that they do not want US troops in Iraq.  Why are they there?

For those who believe the US created and/or funds ISIS, the belief is that ISIS is a US-created bogey man that is used to justify US troops remaining on Iraqi soil.

This is a belief that needs to be factored in -- it effects how the nation is seen throughout the Middle East -- it effects simmering tensions and has long lasting effects.  Instead, this belief is not addressed and is instead ignored.

The Iraq War has continued since 2003.

And there is no reason for US troops to still be in Iraq (there never was, but let's set that argument to the side).  Every year, it's the same promise of 'turned corner' that always leads back to the same impasse.

Every four years, the US installs another prime minister and he is unable to govern.  As this happens repeatedly, the question remains whether or not this is intentional?

Do we repeatedly supports these anti-Iraqi people prime ministers because they do the US bidding?

It would appear so.

And we keep US troops on the ground to ensure that these puppets are not overthrown.

Remember, it was when Barack Obama and others in the US government feared ISIS was going to seize control of Baghdad that Barack publicly sent US troops back into Iraq.  (They never left Iraq to begin with -- as Ted Koppel reported in real time in December of 2011.  In addition, there's the fact that Barack sent a brigade of Special-Ops in during the fall of 2012. Tim Arango (New York Times) reported, "Iraq and the United States are negotiating an agreement that could result in the return of small units of American soldiers to Iraq on training missions. At the request of the Iraqi government, according to General Caslen, a unit of Army Special Operations soldiers was recently deployed to Iraq to advise on counterterrorism and help with intelligence.")

So as long as ISIS remains in Iraq, the US has to have troops there? 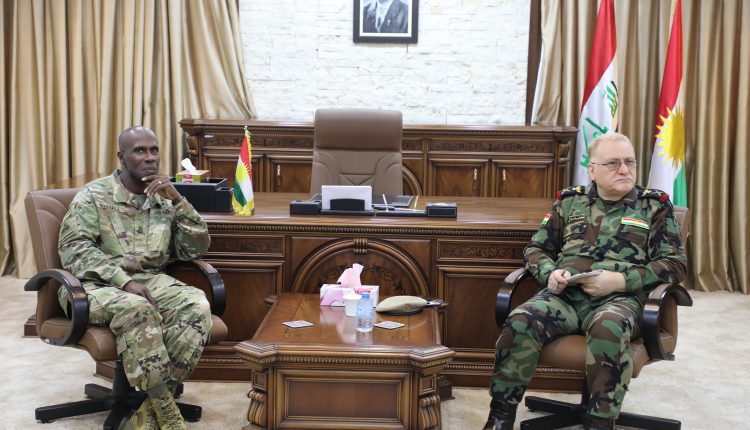