Kat's Korner: Just an invitation would have been just fine

Kat: Last month, Elaine wondered, "Will CDs go the way of cassette tapes?"  She wondered whether there would be any fondness for CDs the way there has been for vinyl.  Vinyl took a deep hit when cassettes took over but vinyl's still around and, in fact, thriving today.

I was thinking about that this week when I purchased Stevie Nicks' STAND BACK.


No one looked as I walked by
Just an invitation would have been just fine
Said no to him again and again
First, he took my heart, then he ran
No one knows how I feel
What I say unless you read between my lines
One man walked away from me
First, he took my hand, take me home

One of the many great songs Stevie wrote -- and one that Prince plays keyboard on, yes -- but also the title of an album released this year.  Actually two albums.  STAND BACK is a single disc on CD or two discs on vinyl.  STAND BACK 1981 -2017 is a multi disc in either format. 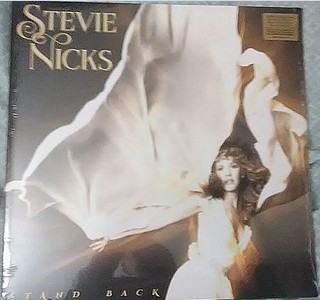 It came out this year because, last April, Stevie was inducted into The Rock and Roll Hall Of Fame -- a very rare accomplishment for a woman.  (Cher, Tori Amos, Tracy Chapman and Carly Simon are four notable women that the Hall has repeatedly overlooked.)  Not only did she get inducted, she also became the first woman to be inducted twice.  In 1998, she was inducted along with Christine McVie, Mick Fleetwood, John McVie and Lindsey Buckingham as part of Fleetwood Mac.

To note that accomplishment, RHINO RECORDS rushed out this collection of songs.  I'm covering STAND BACK, the two disc version.  This covers Stevie's career with 18 tracks.  Two duets (both hits -- both from her first solo album BELLA DONNA) make the cut: "Stop Draggin' My Heart Around" (with Tom Petty and the Heartbreakers) and "Leather and Lace" (with Don Henley.

What else do you get?

Some of the hits -- "Edge Of Seventeen," "Rooms On Fire," the title track of the collection, "If Anyone Falls," "Talk To Me," "I Can't Wait," "Has Anyone Ever Written Anything For You" (a song Clive Davis loved -- too bad she wasn't on his label at the time, it might have gotten the push needed and made it into the top forty instead of stalling at number 60 -- but, as he noted, radio stations at that time were only playing one woman for every three songs sung by a man), "Blue Denim," "Long Way To Go," "Every Day" and "Secret Love."

Not on the collection?  "For What It's Worth."

That's a song I love.  I enjoyed it on the album IN YOUR DREAMS.  But it didn't stand out to me.  It took Elaine repeatedly noting it to me in conversations we had and also repeatedly posting the video at her blog for me to really start appreciating that wonderful song.  When I listen now, it shocks me that it didn't stand out as one of the main highlights of the album (I didn't even note that song in my review of the album).  But that's how it can be with music.  Time and friendship can really let us appreciate a song we might have otherwise looked over.


Besides that hit song, there are other charting singles that don't make the cut for STAND BACK -- "Nightbird," Sonny Bono's "Needles and Pins" (which she and Tom Petty & the Heartbreakers had a hit with), "After The Glitter Fades," "I Will Run To You" (again with Tom and the Heartbreakers), "Enchanted," "Nothing Ever Changes," "Sometimes It's a Bitch," "Planets Of The Universe" and "Sorcerer." 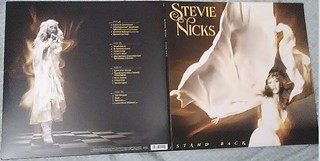 There's no way that a two-disc vinyl set can cover Stevie's charting singles.  There's just not enough room which is probably why there is a STAND BACK 1981-2017 version (which sales on AMAZON for $91.56 new). For a two disc sample of Stevie's solo career, STAND BACK is a strong entry.

I love Stevie to tears but took a pass on this album.  I wasn't thinking vinyl at the time, so I was thinking about it on CD -- the multi disc version.  And I really didn't see the point.

I have her live album (on CD) THE SOUNDSTAGE SESSIONS (which features her covering Dave Matthews Band's "Crash Into Me" as well as a gorgeous version of her own "Sara").  I have the three disc CD boxed set ENCHANTED which covers all of her solo career up to 1998.  I have TIMESPACE: THE BEST OF STEVIE NICKS.  I have CRYSTAL VISIONS - THE VERY BEST OF STEVIE NICKS.

So I felt like I had compilations pretty well covered and took a pass on the CD release.

What changed, and the reason I'm reviewing it now, is that I bought the album last week and where I bought it.  We had finished speaking on campus and it had been a long, long day.  We were all tired and we needed something to stir fry.  If you now C.I. -- as Ava, Wally and I do from years on the road now -- you know you do not go into a grocery store with a tired C.I.  She will wander the aisles -- she admits this herself.  If she's shopping for something for you to eat, no problem, she can do that in a matter of minutes.  But for her?  When she's tired?  "I think I can eat . . ." but then that gets put back for "I really should eat . . ." which turns into something else and, honest to God, she and I were once in a grocery store from midnight until 1:30 when she left with just a granny smith apple.  That is not an isolated incident.  So we all say, "Keep the car running, I'll run and grab something" if it's after ten at night.

So we were looking for something that was open (it was probably 10:40 at night) and there was a Wal-Mart superstore.  I yelled, "I'm going in, everybody wait for me here."  And I grabbed some things to stir fry -- as we'd already discussed -- and a bag of ice and, as we went rushing around a corner, there was the DVDs and CDs and, wait.  I came to a complete stop.  Vinyl.

Wal-Mart is selling vinyl.  I flipped through quickly.  They had some GUARDIANS OF THE GALAXY soundtrack (don't know if it was the first film or the second), Lana Del Rey's BORN TO DIE, Elvis Presley's THE ESSENTIAL ELVIS PRESLEY, a Tom Petty greatest hits, an Elton John greatest hits, a Jimi Hendrix' greatest hits, Fleetwood Mac's RUMOURS, the Beatles' ABBEY ROAD (regular lp and a picture disc lp to note the 50th anniversary of the album) and SGT. PEPPER'S LONELY HEARTS CLUB BAND, Amy Winehouse's BACK TO BLACK, Michael Jackson's THRILLER, Nirvan's UNPLUGGED, Led Zeppelin's LED ZEPPELIN IV and . . . what?  Is it?

Yes, it was.  Stevie Nicks' STAND BACK.

A tiny gold sticker on the front reads:


I don't believe that it lives up to that sticker.  Again, no two-disc collection could.

But it's a solid collection, a worthy collection.  And if Wal-Mart's carrying it that means a lot of us will be considering purchasing it because we'll be seeing it as we're shopping. If you do and you're wondering whether to purchase it, consider all I've said above as well as the fact that two great songs from Stevie's 24 KARAT GOLD: SONGS FROM THE VAULT made the cut: "The Dealer" and "Lady."  Vinyl is holding strong, all these years later, even after its predicted demise.  And STAND BACK is a strong collection, drop the needle on the collection and accept the invitation from Stevie as you dance around the room to the eighteen tracks.


No one looked as I walked by
Just an invitation would have been just fine
Said no to him again and again
First, he took my heart, then he ran
No one knows how I feel
What I say unless you read between my lines
One man walked away from me
First, he took my hand, take me home
Stand back, stand back
In the middle of my room
I did not hear from you
It's all right, it's all right
To be standing in a line
Standing in a line I would cry