France has already announced they are pulling their troops out of Iraq.  Now New Zealand announces that they are doing the same.  NEW ZELAND HERALD reports:

New Zealand troops who were stationed at Camp Taji in Iraq are coming home.
Foreign Minister Winston Peters and Defence Minister Ron Mark made the announcement today, saying it followed the successful conclusion of the mission at Taji to train Iraqi forces.
"New Zealand is very pleased to have fulfilled its commitment to the Iraqi Government and the Defeat-ISIS Coalition to train Iraqi Security Forces at Taji," Peters said in a statement.
Since December New Zealand has had 45 Defence Force personnel in Taji; 28 personnel arrived back in New Zealand last week and are in isolation at the Royal New Zealand Air Force base in Auckland.

Iraq: when one of the most listened to men in the country, Moqtada Sadr, says that the Covid-19 virus is linked to homosexuality and asks the countries that have legalized marriage for all to repeal such a law! What a regression

Yep it’s same sex marriage that got us here pipes up Moqtada al Sadr - powerful cleric in Iraq Always one of questions raised by such pronouncements- If God is as petty as you suggest, then surely not worth praying to..

Also I’d like to add that Muqtada Al Atari can shut up and stop spreading his toxicity all over Iraq. The next months will be really hard for the Iraqi health system and the whole country and spreading hate isn’t gonna make things easier. Thanks

Iraq's most influential politician Muqtada al-Sadr is a Shiite cleric who accused the LGBT community of causing Covid-19 pandemic in a Tweet at 4.30 pm yesterday. He wants all governments worldwide to immediately repeal same-sex marriage laws:

One of the prominent religious leaders in Iraq, Muqtada Al-Sadr, says legalizing same sex marriage is the cause for #COVID19 #Covid_19

Religious bigotry takes no time-out! Why don't you ask your fictional God to stop it then?

These are the dummies that rule Iraq Muqtada al-Sadr “One of the most dangerous things that have caused this epidemic to spread is legalization of gay marriage.”


Our Ambassador in Iraq rejecting Muqtada al-Sadr's stupid claim that coronavirus is punishment for same sex marriages and politely suggesting that the Mullah should engage in a more constructive discussion on managing the pandemic. Glad I don't have to be so diplomatic 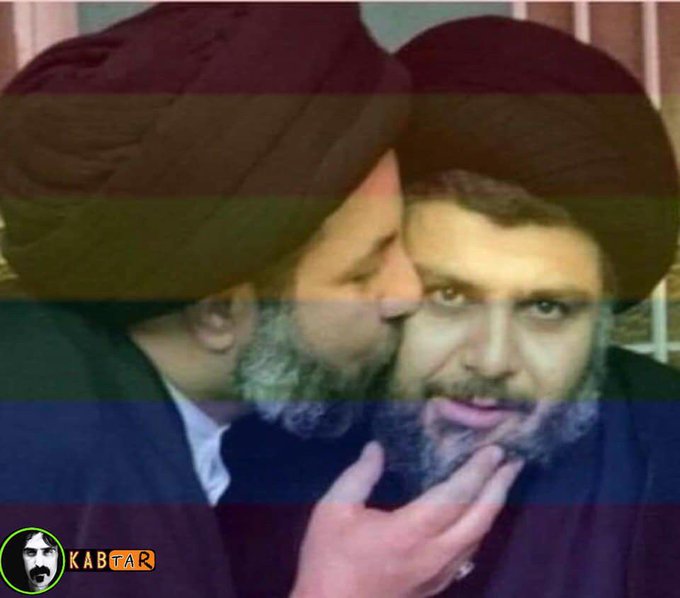 
8)
It's easy to laugh at Muqtada al Sadr (he is a joke) but last time his followers set on targeting homosexuals in Iraq hundreds of them were gruesomely murdered in ways we see on TV shows.

IRAQUEER, an LGBTQ organization in Iraq, released the following statement:

We condemn Muqtada Al Sadr's statement which claims that same sex marriage is the cause of the coronavirus.  Such statements do not only lack scientific grounds, but are also weaponizing Iraqi people's fears during stressful times to target LGBT+ people. Making such ignorant statements will not only endanger LGBT+ people's lives, but will also put the lives of all Iraqis at risk.  The coronavirus is a pandemic that must be dealt with seriously and medically, and Muqtada Al Sadr's tweet will only distract us from what is really important, which is to save Iraqi lives.


ANTIWAR.COM publishes a lot of strong and wonderful pieces.  It also publishes some real trash.  In 2011, there was an attempt -- that didn't end until 2014 -- to turn Nouri al-Maliki into a hero.  He was a thug.  But some people need simplistic narratives and they need 'good guys' to root for so desperately that they'll tell any lie.  While they were celebrating Nouri, even Barack Obama was rebuking him.  By 2014, Barack was publicly calling him out and not just refusing to take Nouri's phone calls (that started in November of 2012).  I bring this up because I called out a piece at ANTIWAR.COM last week.

It was another 'Moqtada is a hero!' bit of nonsense.

These people don't know what goes in Iraq -- these people who push these lies.

Moqtada, in 2011, began building a real movement.  He destroyed that in February of this year and became a national joke.  Many of his 'lieutenants' began leaving his movement -- some publicly.  The Iraqi people began openly mocking him.  He was seen as someone with loyalties to another state (Iran) and who would sell out Iraq for that foreign government.  I know there is a great deal going on in the world at any given time, even before a pandemic, but I've always called out people who decided, on their own, to Iraq 'expertise' without doing the work.  I called out Phyllis Bennis for going on COUNTERSPIN and insisting that no one knew something when anyone who read Nancy A. Youssef's final report for KNIGHT RIDDER (right before it was officially taken over by MCCLATCHY) knew it (that the US government did have a count of the Iraqi dead).  If you're going to present as an expert, you better do the work required.

Moqtada cratered at the start of February.  By the end of that month, protesters were mocking him and laughing at him (at that point for his claim that men and women should not protest together).  His fear of women was what really got the 'Moqtada is a closet case' rumors going on Arabic social media.

Anyone praising Moqtada today is suspect in my book.  Also true of those who don't grasp how badly Moqtada has diminished his own reputation and standing over the last eight weeks.