Kat: When you think of big shoulders, depending on your original point of reference, you may think of Joan Crawford in any of her movies -- especially the film noir classics she made.  You might think of the eighties and DYNASTY with Linda Evans and Joan Collins.  You might think of a shoulder you'd really want to rest your head on -- Henry Cavill or Mark Wahlberg or Jay Ellis.  Or you might think of 1999 when the epic battle of the shoulders was between Madonna and Ricky Martin.

It was probably the last minute she ever mattered musically.  She was coming off 1998's RAY OF LIGHT, her last album that really delivered, and "Beautiful Stranger," her last single the country wanted to listen to.  Ricky?  He was young and new to many non-Latinos.  He was breaking into the English language music market with his hit "Living La Vida Loca" and his self-titled album that would go on to sell over seven million copies in the US alone.  Like the vampire she's often compared to, Madonna was attracted to the fresh new blood Ricky had to offer.

Remember them at the Grammys -- all shoulders and delts? 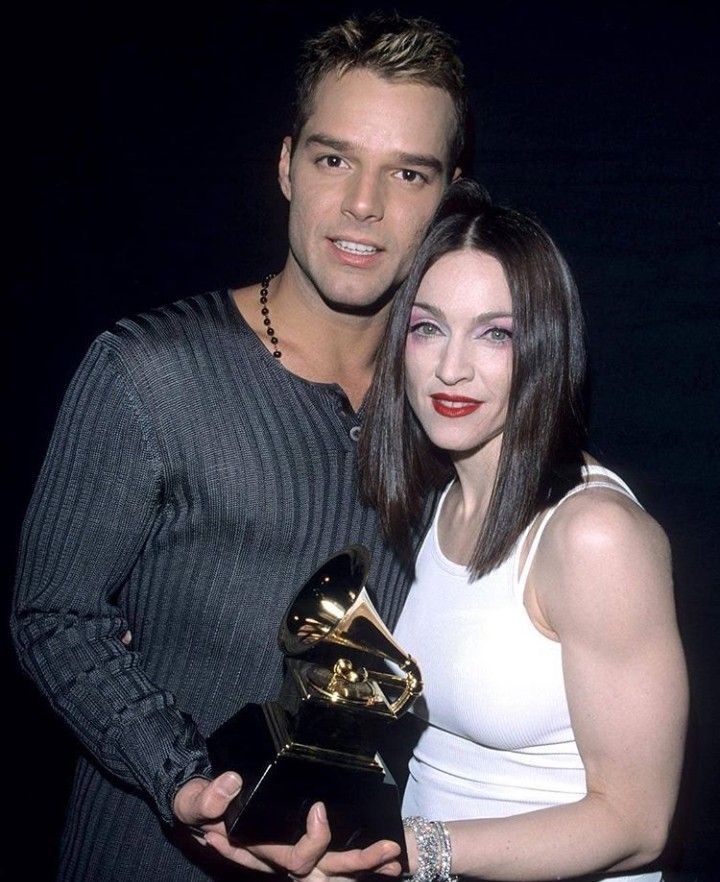 Life's not been good, on the charts or musically, for either of them since that moment.

Ricky chose to shake his bon-bon and that resulted in an awkward hit that sent many of his new admirers fleeing.  They never came back.

Do we blame Barbara Walters with her 2000 interview?  Or do we accept that her raising the issue of sexuality was actually a brave and needed thing?  Was Ellen really going to be the last celebrity to come out?

America needed to grow up.

Some of us had already.

Ricky being gay really wasn't a shocker (though it would take several years before Ricky himself realized it).  The minute he showed up in the video "Living La Vida Loca," didn't most of us know he was gay?  My friend Maggie didn't.  Then again, it took the public toilet bust for her to realize George Michael was gay and even then she wanted to argue it out.  But for most of us, we already knew and it wasn't anything that put us off.

Ricky was hot, sexy and young.

Even in 1999, many Americans only cared about that.  It didn't matter that he was gay.    And then came the bon-bon shaking which was too camp for words and one of the truly worst songs to ever chart -- yes, far worse than even "We Built This City."

After that, he largely disappeared in many ways.

Sure, he popped up for the piss outrage.  He revealed he liked golden showers and suddenly, due to so many tisk-tisks, the world was reminded Ricky was still around.


In 2012, he played Che in EVITA on Broadway.  He really was amazing. I wrote that at the time (I'm not a Broadway gal, we went to see it because we were speaking in the area and because C.I. is a friend of Ricky's, which is how we got to meet him after the performance).  I knew EVITA only due to the Madonna movie -- a depressingly unsexy film by Alan Parker (who previously bungled sexy with ANGEL HEART).  In one number, Antonio Banderas managed to break through but not even the young men showering in their underwear -- and who showers in their underwear other than John Travolta in STAYING ALIVE? -- managed to muster even a whiff of sexy.

Ricky made Che his own and made him a force to be reckoned with.

From time to time, I've checked out his albums hoping to find something I really loved.

PAUSA came out at the end of the week.  It's an extended play --  six tracks.  And I really love it.

"Simple" kicks things off -- a duet with Sting that reminds me of the intoxicating groove Alicia Keys captured with "In Common."  It's got that sleepy time, sexy feel to it.  Then comes a strong ballad ("Recuerdo") with Carla Morrison.  "Recuerdo" is not the Edna St. Vincent Millay poem but it is a tight song where Ricky and Carla sing about sharing the emotions within, the ones that cause your breath to catch.  Pedro Capo shows up for "Cae de Una," Residente and Bad Bunny for "Cantalo" and Diego El Cigala for "Quiereme."  The tracks are tight and solid.

Ricky's stating that this isn't the album he had planned.  That album will be coming out soon but that album is more of a party.  Due to the pandemic, he wanted to do something more reflective.

Reflective is a good adjective for PAUSA.

And it's also a good starting or rejoining point for listeners and Ricky.  These days, he's married to Jwan Yosef and he's the father of four children.  Life's gone on while Ricky's been off a lot of people's radar and the life has only sharpened his artistic talents and given him a lived-in sexy quality that underscores every word he sings.  And, yes, he's still got those sexy shoulders.