Kat: Listening to the new album from Maria McKee is an amazing experience, reading about it?  Not so much.

LA VITA NUOVA is the new album.  Yes, THE NEW LIFE, my liberal arts degree did not go to complete waste.  Dante's poetry about courtly love.  Not sure what that had to do with the album when I discovered it last weekend.  Or even when I spent days listening to it.

It was a sonic soundscape, I knew that.  I knew it was fourteen glorious songs.  I knew that just listening to track two, "Page of Cups," got me dizzy as her voice scaled ever and ever higher throughout the song.

It's an amazing voice and it always has been.  I don't think any singer in the 20th or 21st century was as gifted with a voice as she was.  She has the notes and the range, yes.  She has the power to belt and the sense when to whisper.  She turns every song into a mini-movie, committing herself to every nuance and mood.  She's got the chops and she knows how to use them.

It hasn't resulted in the career she deserved.  She's had two hits in the United Kingdom (in fact, "Show Me Heaven" even went to number one there) but here, in her own country, she struggled with her band Lone Justice and continues to struggle now.

Friday, I spent time reading up on Maria and, as usual, so much garbage.  Let's deal with facts first.  A nice little lie is that her label at the time (GEFFEN) failed to promote LIFE IS SWEET when it was released in 1996.  LIE.  Flat out lie.  Check the music periodicals of that time.  Her third album for GEFFEN, third solo album, got bigger ads and a bigger push than her first two.  The one promoted the least by the label was 1993's YOU'VE GOT TO SIN TO GET SAVED which, for the record, remains her masterpiece, not LIFE IS SWEET.

Male critics -- as opposed to men who love music -- love LIFE IS SWEET.  I've always maintained that they never actually listened to it and that's been proved again as they make various comments about it this year.  What they liked, please note, was that a woman was citing male influences.  And when they again praise the album this year, they do so to provide shout outs to this or that male artist.

It's not about Maria or what she created, it's about their jerking off to their rock gods.

LIFE IS SWEET is not a bad album, Maria's never made a bad album.  Even her weakest album, Lone Justice's SHELTER, had enough solid tracks ("Wheels," "Dixie Storms," "I Found Love," "The Gift" and the title track) to make it a good, if not great, album.  But her masterpiece is YOU'VE GOT TO SIN TO GET SAVED which finds her taking all she's learned about studio singing from her two albums with Lone Justice and her self-titled debut to create something revolutionary and revelatory.

GEFFEN had a masterpiece and didn't care to promote it.  Maria wasn't wanting to be the 'pretty girl.'  GEFFEN (and Geffen himself, David Geffen) wasn't having it.  They were going to teach this upstart that a woman had to be pretty -- not just clean and well groomed, painted up and polished.  By the time LIFE IS SWEET came out, they actually thought Maria's down playing of her looks might be a good thing since it was the age of grunge.

The first time I heard Alanis (probably "Hand In My Pocket"), I changed the station and thought, "Someone's stealing from Maria."  Indeed, Alanis' commercial breakthrough was little more than a copy of the vocal style Maria had perfected on YOU'VE GOT TO SIN TO GET SAVED.  Alanis doesn't have Maria's range.  But she did get the success.  Many other women did.

That was all unimportant to me.  I have a music collection -- not an autograph book.  As long as she delivers on the music, I will forever be along for the ride.

And she delivers on  LA VITA NUOVA.  And on track ten, "The Last Boy," she achieves something so tremendous that the real shocker is she manages to maintain that height for the next four tracks.  The album ends with a big wallop.

The singing is better than solid as she works through new ways to use that amazing instrument.  The song writing really makes an impact.  Here are some of the lyrics to "Just To Know That You're Alright."

"Weatherspace" features amazing piano work.  The instruments are solid throughout.

LA VITA NUOVA is an album of desire and it's a beauty and a keeper.

You wouldn't know that from the 'reviews' and the press when this album came out last March.  On Friday, I just shook my head appalled at the rank sexism.

Steve Grand has quickly become one of my favorite artists.  I love him.  And he's gay and out and being gay is part of his story.  It is not his full story.

Reading the press, I remembered something I'd hear a year or so back, that Maria was gay.  I'd forgotten it because it's not a big deal to me (or anyone else living in San Francisco), it's a facet of who she is, not the sum of everything.

But to read the leering press on her from last March, is to grasp that sexism hasn't gone away.

Maria had same-sex attraction early on.  Her parents objected and she bottled it up (with the apparent knowledge that her grandmother had the same desires).  She married a man a few years back and, in the last years, had to honor who she really was.

That's a story and it's a valid story.  But Maria's promoting an album.  And the press doesn't want to know about the album unless they can name check David Bowie (while ignoring Laura Nyro -- someone Maria did credit in every interview she gave for this album but someone most writers -- male and female -- elected to ignore).

After they've stroked the penises of their rock gods, supposed music writers than wanted to press their ears to Maria's bedroom door.  What does this mean for her marriage?  Has she found a woman -- oh, she has found one to love?  Just one?  Is it still going?

This is all very prurient and has nothing to do with how amazing "However Worn" is.

Does Maria think she achieved what she was going for with LA VITA NUOVA?  That's a question I'd like to know.  How does she reconcile the desire pumping through the album with modern understandings of 'courtly love'?  (We tend to see it, since it doesn't result in sex, as less passionate -- that's not necessarily true of courtly love, as my professor informed us years and years ago.)  One track on the album, her pick, that she feels really achieved all her aims?

Even tired questions like, "Is 'However Worn' about a particular person?" would keep the focus on the music.  Instead, it's on her personal life.  Why do women put up with this?  I fear Maria may decide to take another lengthy break as a result of the press and disappear for 13 more years.  Which is a real shame because LA VITA NUOVA is a classic album.  Remember when Laura Nyro released NESTED and went away and then released MOTHER'S SPIRITUAL (a truly classic album) and went away because the critics couldn't focus on the music and couldn't appreciate what she was attempting to say?

I hope that doesn't happen to Maria.

I wonder why men -- who have been such sex gods in rock -- aren't written about in the same way.

I'd never thought anything about Conor Oberst's sex life.  BRIGHT EYES has a new album out and even that hasn't made me contemplate what he's packing or how he uses it.  But Maggie and I listened to the new album, DOWN IN THE WEEDS, WHERE THE WORLD ONCE WAS, together Saturday morning and she thought she knew what Conor was like. 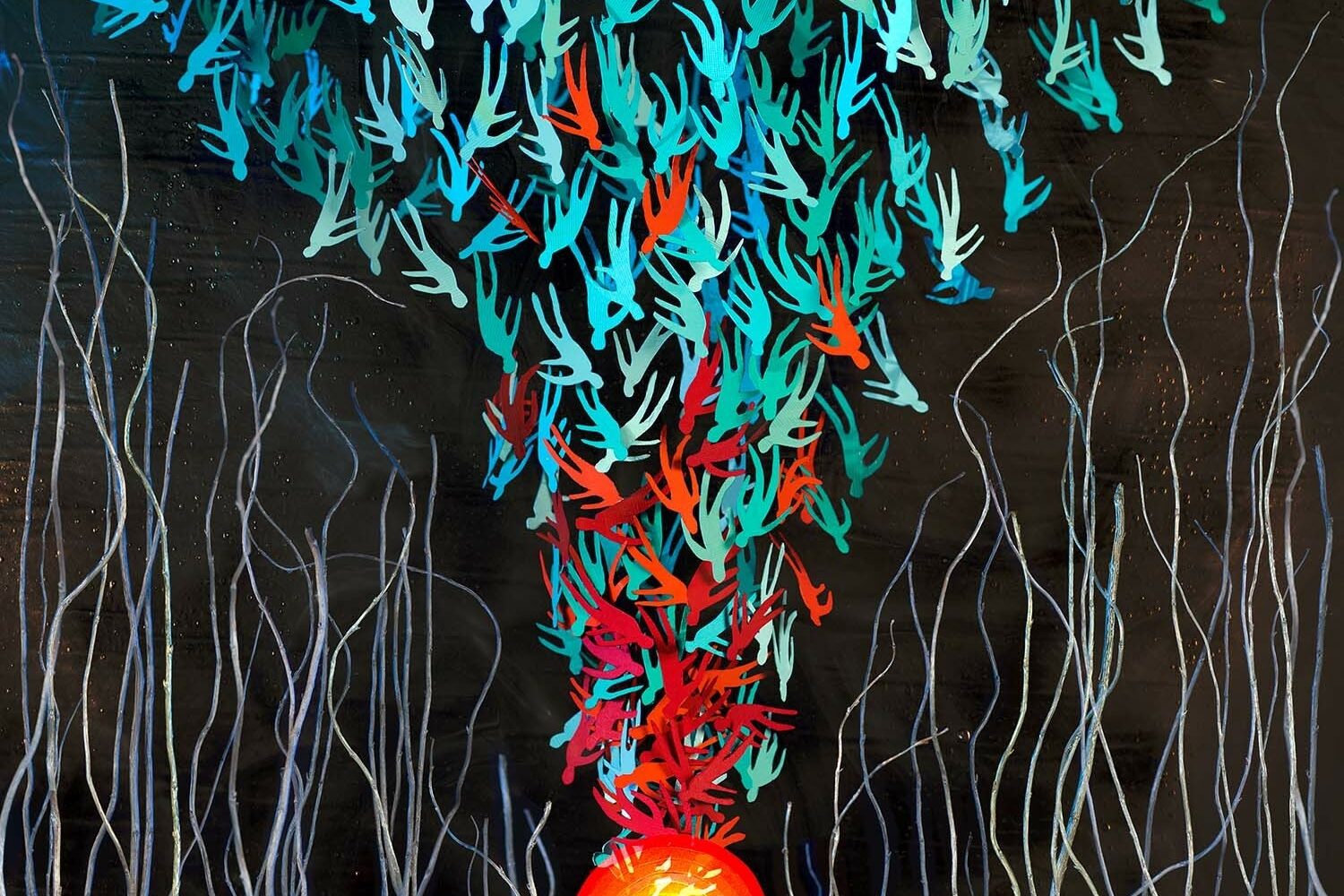 Kat, she said, he's down to earth and earthy.  He's got a natural appeal and a natural smell -- probably Lever soap, if not Irish Spring.  He's the type of guy who wants sex right away so he's flirting with you with his eyes all the way through dinner so you know where this is headed.

After I finished laughing and scoffing at Maggie's 'analysis,' I admonished her for drinking and getting drunk on a Saturday morning.  At least wait until noon, I joked.

She couldn't believe I didn't see it her way.  "Think hard, Kat," she instructed, "and let's see what you see."

So I let my mind go blank -- some of you would argue that's my natural state -- and pondered it.

Connor, I said, is the kind of guy who needs a woman who stands up to him and then some.  In fact, a woman who not only didn't take his s**t but told him that she was a goddess and that he would treat her like a goddess from now and to pull down those pants right now because she was about to improve his behavior with a hair brush would have him shooting in his shorts before she even got him over her knee.

It was Maggie's turn to scoff.  "That's not Conor, he's every driven."

We bickered back and forth for some time.

No, I responded, he's not.  He's driven when it comes to his PLAYSTATION and his guitar.  The rest of the time, he's so lazy he'll sit for an hour and a half on the couch, hungry the whole time, before he will finally get up and go to the kitchen to find something to eat.  And that hair?  You know the only time it gets combed is when some woman's had enough of all the goop and the way it hangs so she takes a comb to it.  Face, it Conor's the kind of guy that if you surprised at home would smell.  I'm not talking reeking of sweat from having worked out.  I'm talking that timid armpit smell lazy guys get.  I'm sure on a date, he's going to have prepared and put on some cologne, something he bought for the color, not for the smell --

Getting dressed for a date

Hand to God, that came over the speakers right as I said "for the color, not for the smell."  It's from "Persona Non Grata."  Between that and his singing about a woman thinking he's a "Peter Pan" a few tracks later in "Comet Song," I'll stand by my analysis.  And wait for him to cover "The S&M Cowboy" ("I was branded the S&M cowboy, hogtied in the stall . . .") that Dr. Demento used to play.

I suppose I could write more about the album but if this is how we're going to treat women artists, why not do the same with men?

While we ponder that, let's all just enjoy DOWN IN THE WEEDS, WHERE THE WORLD ONCE WAS and agree that it's great that Bright Eyes is back to making new music.