Kat and Elaine:  Sam Smith is a gorgeous voiced singer who has the power to move you deeply but not on LOVE GOES.  In fact, LOVE GOES should be called LOVE BLOWS. 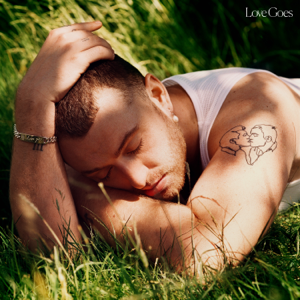 The album is one problem after another.  Let's deal with the first problem.  Sam is not he/him, Sam is they/them.  You don't generally see as much facial stubble on a person who wants to leave gender constructs behind but maybe that's just Sam offering a tribute to Don Johnson's MIAMI VICE period?  If that seems a little snide, it's meant to be.  It's one thing to say you want to leave the binary construct but if that's the case why don't you leave it?  He's singing of wanting to "kiss boys," for example.  What if the objects of his desire that he's identifying, do not self-claim the term "boys?"

We're not saying that maybe they prefer "men," for example, but, yes, that could be the case.  We are saying that while singing of wanting to "kiss a hundred boys," Sam's falling back on the binary that Sam claims to want to reject -- as least to reject when speaking of Sam Smith.  So it's all about self, is it, Sam, all about you?

Look, we put up with Prince's whole period when he wanted to be a symbol.  It was nonsense, let's be honest.  It harmed his career because it made it more difficult to talk about him and to write about him.  Soon publications gave up on trying to use the symbol and just started writing "The artist formerly known as Prince."  Is Sam prepared for publications writing about "The artist formerly referred to with a male pronoun"?

This is not an attack on the they/them movement.  And we both have a person or two in our circle who identifies as such.  Unlike Sam, they didn't just issue a press statement and then the matter became forbidden.  They speak of what it means to them, they speak of the way it strengthens their self-identity, they make this an ongoing conversation.  Sam issued a press release -- royal edict? -- and that's apparently that.  If Sam's gained anything from this, if it's been at all enriching and positive and affirming, Sam hasn't seen fit to comment.

It's a private matter?

If it's a private matter, why did it require a public statement?

Listening to the album raises that question.  Sam continues to apply a binary construct to others.  And there's no song that deals with self-identity that one would expect on the first album after Sam's made the announcement of they/them.

Maybe there was such a song at one point?  Maybe on the better album, there was?

The better album?  The one that's not this pedestrian and boring album.

Some reviews have focused on the fact that it's not the dance album they wanted.  If you're wanting SAM DOES DONNA SUMMER ON THE DANCE FLOOR, you'll be disappointed, yes.

But we'd argue that most people are going to be disappointed.  Sam released IN THE LONELY HOUR and THE THRILL OF IT ALL -- both strong and solid albums, classic albums that argued we might have another Sade -- a true album artist who creates something amazing that you listen to from start to finish and don't have to skip this track or that track and time can seem to stand still while you await the artist's next release.

We love Sam and argue that the next album will be better.  Then again, we can't imagine how it could be worse.  Comparisons for LOVE GOES?   There hasn't been a more disappointing album since Terence Trent D'Arby offered NEITHER FISH NOR FLESH as his follow up to INTRODUCING THE HARDLINE ACCORDING TO TERENCE TRENT D'ARBY.

LOVE GOES has no focus, no theme, no glue holding it together.  If this nonsense had to be released?  They should have called it JUKEBOX or something else to indicate this wasn't an album, just various songs.  Now some people like assortments.  Us?  Get that crap away from us.  If you're giving us a box of chocolates, make it chocolate covered cherries.  Assorted chocolates?  Just shows you don't know us at all and are hoping to cover your bases -- and especially hoping that, each time we take a bite and spit out another coconut candy in disgust, we won't be thinking, "That jerk didn't put any thought into this gift at all."

That's how Sam's album feels: No thought at all.

They went into the studio and recorded an album, packaged it and had it ready to be released at the start of May.  It was said to be a deeply personal statement -- though how personal an album by a single human being that refers to themselves with a collective pronoun can be is a question that prompts a thousand essays.  But, in February, it was announced that TO DIE FOR would be released May 1st.  And that seemed incredible because "To Die For" was an amazing song and a powerful vocal performance.

The title track is now a bonus track.  It doesn't fit with the bulk of the album.  Why?  Because bitch blinked.  Is it okay to say bitch or do we need to say bitches?  We'll say whatever you want, Sam, to identify you, but the only identification for LOVE GOES is "theft."

Bitch blinked.  They had an album that they could have been proud of and would have resulted in much applause but they were a scaredy-cat who said, "Oh, this can't be released, it will destroy my name because we're in the midst of a pandemic."

You watered down a concept and watered it down again.  You tinkered with it and you destroyed it.  This is a garbage album and would be garbage from a new artist but coming from you, an established artist trying to grow their sound, it is beyond garbage.

This album should have been released as planned.  That's a point we have both made repeatedly.  Let's quote from one of our May posts at one of our sites (Elaine's LIKE MARIA SAID PAZ):

I agree with Kat's "The chickens who won't release music right now" from last night.  Sam Smith (and others) should have released planned albums.  Sam was supposed to release TO DIE FOR and now the album's been pushed back to who knows when and the title will be changed.

This is a mistake.  Fiona Apple has released an acclaimed album and that could be the same for Sam.

If this is typical of what else is on the album, Sam needs to release it immediately.  What is a huge step right now might not come across as such in a month or two when everyone's ready to release the albums that they've been holding back.

I'd be much more concerned that a strong album would get buried in an avalanche of releases.  Sam's album could be amazing and, if it is, it needs to stand out.  It could get serious critical attention if it came out right now.

That concern didn't end up being the problem.  The album, finally out six months after it was supposed to be released, does not suffer from being 'old hat.'  Instead of being dated, LOVE GOES is a bad haircut.  We've all been there, right?  You go in and you find out Ginger (or whomever) is out sick and, though only Ginger knows your hair, you're pressed for time so you say fine, whatever and let some stranger cut your hair.  It seems like time stopped but there you are at home, staring in the mirror and shaking your head in disgust.  Especially over that one section that appears to have been overlooked by the not-Ginger-stylist.  So you grab the scissors and tell yourself that you're just going to fix that one area.  Then it looks worse so you try to fix another and then another and then . . .

That's what Sam did.  Sam had a solid album -- the bonus tracks make that clear, the bonus tracks were originally supposed to be the heart of the album, integral to the album.  But because of Covid and because of being a scared bunny, they/them destroyed their own album.  Sam tinkered with it and tinkered with it until its a useless and soggy piece of garbage.  The album's few good songs share space with tracks here that aren't bad -- they're worse than bad, they're filler.  Filler, they just make you yawn.  Who would've thought that was possible from Sam Smith?

LOVE GOES is a story of cowardice and how someone can destroy their own album by refusing to stick to their artistic vision.  This is neither a good look nor a good moment for Sam.  As fans, we hope he gets into the studio very quickly and records something else, something better -- he couldn't record anything worse.  Otherwise, Sam's career will be one more fatality during the pandemic.  We both have the album on vinyl.  If, like us, you're a Sam Smith fan who is going to buy everything he puts out, get LOVE GOES.  But if you're someone who only buys or streams things that deliver artistically, avoid and ignore this album.