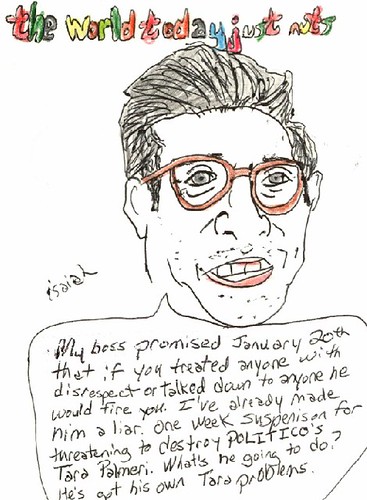 Isaiah's latest THE WORLD TODAY JUST NUTS "TJ And Joe's  Tara Problems."  "My boss promised January 20th that if you treated anyone with disrespect or talked down to anyone he would fire you.  I've already made him a liar.  One week suspension for threatening to destroy POLITICO's Tara Palmer.  What's he going to do?  He's got his own Tara problems."  Isaiah archives his comics at THE WORLD TODAY JUST NUTS.

Isaiah: And that's why it's never really a possibility to stockpile comics.  I did that one Friday afternoon for this Sunday.  Saturday afternoon?  This:

White House deputy press secretary TJ Ducklo has resigned, the day after he was suspended for issuing a sexist and profane threat to a journalist inquiring about his relationship with another reporter.

In a statement on Saturday, Ducklo said he was “devastated to have embarrassed and disappointed my White House colleagues and President Biden”.

Isaiah (Con't): TJ should have been fired.  Anything less is a break of Joe's promise.  Fired.  As for TJ being "devastated" -- he only felt devastated after he was exposed, not when he threatened Tara Palmer.  Crocodile tears.