Wednesday, June 16, 2021.  What progress can the Iraqi government claim and look at Ana Kasparian pretending she's a sister who's been harassed.

Yesterday, the Government of Iraq Tweeted:

Cabinet Spokesperson, the Minister of Culture
@HassanNadhem
, holds a press conference in Baghdad to brief the media on today’s Cabinet meeting and developments in Iraq. 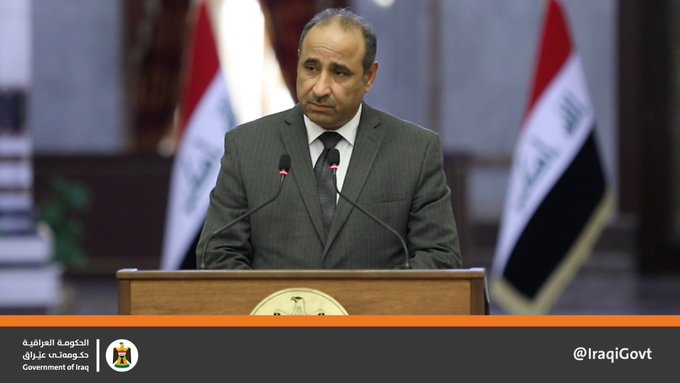 And how do you think those briefings go?

Our economy is still oil-based and we are in danger of being left behind should other countries seriously commit to renewable energy.  Part of the reason we fail repeatedly to attract foreign investment that would allow us to diversify our economy is due to our well known rampant corruption throughout the government.  The other part?  People are scared to do business with us.  Arresting and imprisoning Australian Robert Pether is not helping us there.  We have provided no real reason to the world for his arrest.  We have made no serious moves to hold a trial.  It appears to the world as though we just arrested him to either force better terms on our existing contract or to void the contract.  When we resort to kidnapping foreign business persons and throwing them in jail, we get a bad image on the stage? 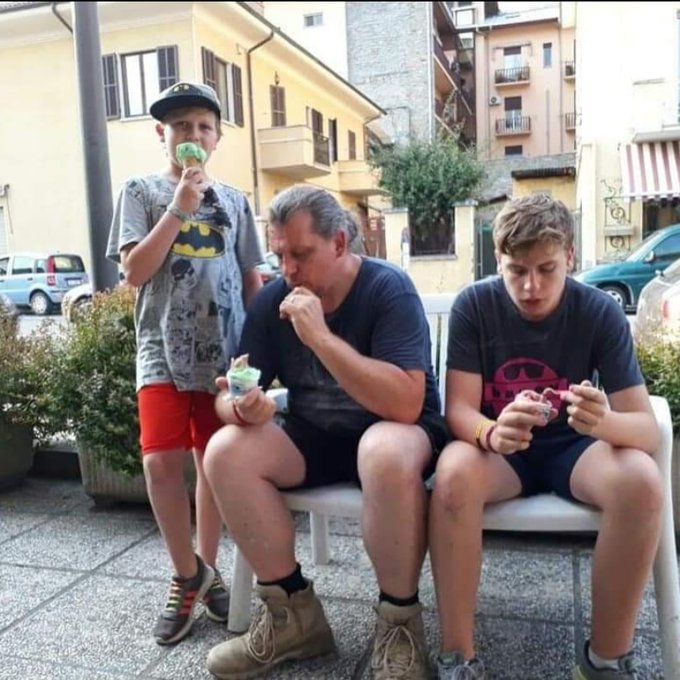 When they got around to the issue of  security, did it go something like this?

Iraq continues to maintain a standing army.  Though we have brought the various militias into the military -- guaranteeing a salary for them -- they continue to refuse to recognize the Prime Minister as the Commander and Chief of the military.  At the end of last month, when thug leader Qasim Muslah was arrested, his co-horts responded with threats, they stormed Baghdad and they encircled the Prime Minister's compound.

#Iraq : Who will win show of force as commander in PMF Qasim Muslah is arrested on suspicion of orchestrating assassination of prominent pro-democracy activist? First top official in Hashd al-Shaabi arrested over wave of killings of activists since October 2019 - #قاسم_مصلح 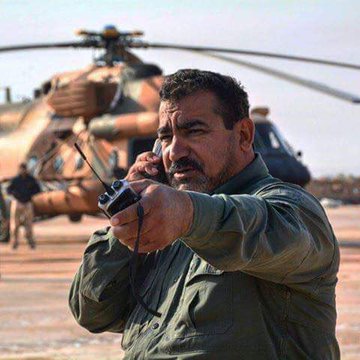 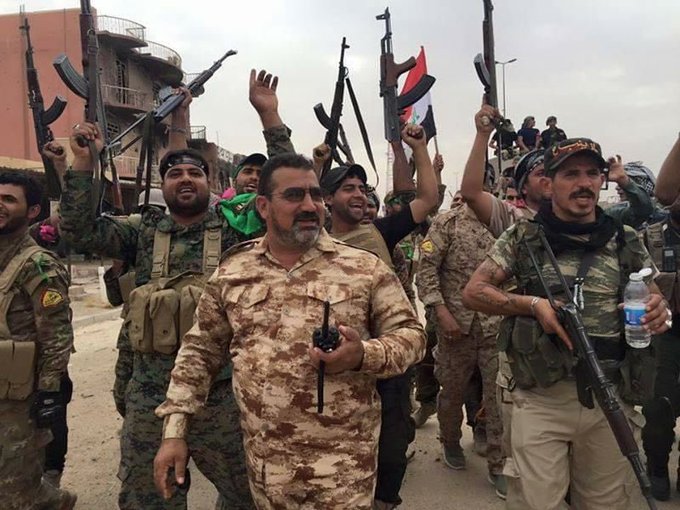 Iraq releases top Iran-backed militia commander Qassim Musleh. Courts claim it was due to lack of evidence, yet thousands of innocent Iraqis languish in prisons for YEARS without trial or evidence. https://thenationalnews.com/mena/iraq/iraq-releases-top-iran-backed-militia-commander-qassim-musleh-1.1237759… via

There is no security&no law to have fair election.Same faces if not worse (militias)will be elected this time. Imagine Qassim Musleh was freed as they provided the Judge with Musleh’s passport that he was in Iran at the time of the killings.They stamped it in the Iranian embassy
10:19 PM · Jun 11, 2021

Where's the progress that they can note at any weekly meeting?  Just not feeling it.

We're due to hold elections in October.  We still don't have basic laws in place though, like how to guarantee security during the election process.  We have, however, disqualified over 135 people from running for Parliament.  We've done little to ensure that Iraq's who have had to leave the country will be able to vote and, honestly, we don't much care about that.  We're really eager that we might be able to just not hold elections since Joe Biden is now US President.  Remember 2010?  We held elections in March of that year.  Nouri al-Maliki refused to step down despite losing.  For over eight months, the government came to a standstill until Joe Biden, then Vice President, oversaw The Erbil Agreement -- a contract that overthrew the election results and just gave Nouri a second term?  We're hoping he does something similar this year but sooner and before we have to hold elections and pay all the costs that will entail.

Over the weekend, THE NATIONAL offered:

Mr Al Kadhimi faces an uphill struggle reining in militias linked to powerful political parties backed by Iran, who gain funds from the Iraqi state and have infiltrated government ministries and the security forces.

These groups, including militias within the state-sanctioned Popular Mobilisation Forces (PMF), have been working to implement Tehran’s foreign policy in Iraq. These include the ousting of US and other foreign coalition forces invited by the Iraqi government to help fight ISIS.

Iran-backed PMF groups also stand accused of killing hundreds of Iraqi protesters who are demanding an end to Iranian-influence, corruption and poor services

Mr Al Kadhimi’s attempts to hold the groups to account have often stumbled.

In June 2020 the prime minister was pressured to release 14 members of the Kataib Hezbollah militia who were accused of attempting to fire rockets at foreign forces stationed within Baghdad international airport, and had been arrested at the scene by the state's Counter Terrorism Service.

Last week, the Iraqi Higher Judicial Council ordered the release of a PMF commander, Qassem Musleh, who was accused of murdering an activist and running protection rackets.

Militias are using murder and intimidation to force Mr Al Kadhimi into a corner and preserve their powerful role in the Iraqi state.

On June 7, the campaign to undermine his government took a more ominous turn when Col Nebras Shaban, an officer in the intelligence services, was shot dead near his home.

Mustafa al-Kadhimi has been prime minister since May 7, 2020.  As noted earlier, elections are expected to be held this coming October in Iraq.  A month or a couple of months from now, they may have a prime minister.  (2010 holds their longest record for the time between elections and announcing a prime minister-designate -- 2010 saw the process take over eight months due to the political stalemate).  Mustafa has not accomplished much.

His inability to protect the activists or to hold their murderers accountable has led some to say that they will be boycotting the upcoming elections.  Mustafa had a chance to turn it around earlier this month when he ordered the arrest of a militia thug but then the man was released without a trial.

Iraqi Prime Minister Mustafa al-Kadhimi met on Saturday in Nasiriyah with protestors and the families of a number of activists who were killed in the October (Tishreen) 2019 movement, stating violence against activists comes as part of a “battle the state is waging against corruption.”

Kadhimi’s media office said the PM met the mother of protestor Omar Sadoun, one of dozens who were killed in the so-called Nasiriyah Massacre that occurred on November 28, 2019, one day after demonstrators torched the Iranian consulate.

He also met with the family of Anas Malik, who died earlier in June of this year from wounds he sustained in the massacre two years ago.

In addition, Kadhimi met the mother of a prominent Nasiriyah activist, Sajjad al-Iraqi, who disappeared on the evening of September 20, 2020, after being kidnapped by unknown gunmen.

"The absence of activists and the assault on them comes as part of a battle waged by the state against corruption and devastation and the expansion of corrupt abusers…..the youth chose their place in the trench of confrontation with these people from the moment they went out to protest for Iraq," Kadhimi said.

There the connection between leaders and society has become weaker. Despite the presence of many political parties and electoral competition, many voters feel disconnected from the political process. The negotiations which take place to form governments after elections provide little space for the public while Iraq’s post-2003 governments have been perceived as distant and unrepresentative. That contributed to growing frustrations in society in relation to the lack of economic opportunities and income, poor public services, and growing public insecurity and disorder. This culminated in an outburst of protests during 2019 and 2020. As a result, when Prime Minister Mustafa al-Kadhimi came to power last year, he proposed to bring elections forward.

In a world where women are murdered, subjected to violence, and to all kinds of injustice, women’s participation in politics is very important. Women’s participation in politics means that more laws will be enacted on issues such as violence against women, femicide, sexual abuse, suspicious deaths of women, and punishment of perpetrators. Last year, the Baghdadi government decided to hold a snap election and announced that the Iraqi parliamentary elections would be held on June 6 but were delayed as the Independent High Electoral Commission asked for more time to organize the elections. Iraqi women activists and members of the media have been carrying out awareness campaigns for the upcoming elections.

I'm referring to the hideous Ana Kasparian who suffers from toxic masculinity but is now trying to cry and moan that she's been harassed by Jimmy Dore.  It was years ago but poor Ana didn't have the strength to speak up until now. Shudder, cry, sniffle, bad Jimmy, noted that her skirt was so short you could see her thong!  Oh the horror, oh the outrage.  It was like, Ana needs you to know, being raped.

So many ways to reply.  First off, dumb bitch, we aren't as stupid as you hope we are.

Bulls**t.  Thats the call to your claim.  You wore an outfit that was inappropriate.  Not the first time.  You wore it in the workplace.

Ana, you dress like a slut.  That assessment came from one of your co-workers years ago.  I've never spoken to Jimmy Dore, I don't know him.  But I am friends with a woman you worked with.  And you were an embarrassment.  "Slutting around"?  I use that term from time and that friend -- I'm sure you know which woman I'm talking about -- taught me that term and applied it to you.

You came in day after day, while she and other women were trying to get a toe-in at TYT and you'd be dressing like a slut, "goodies on display," as she said and flirting with men, hanging all over them.

And you be you.  But don't turn around and whine that someone made a joke about your outfit.

It was a pattern with you.

Long before I could even put a face to your lousy name, I knew all about you.  And that was based on the opinion of women, actual feminists, who knew you and who worked with you.

Jimmy made a joke about your inappropriate outfit.  Get over yourself.

And stop pretending you're a feminist.  Your work demonstrates that you are not.

Women deal with real issues every day and you and TYT ignore that.  You offer smutty grabage not real issues and you do nothing for women so just drop the pretense.

Jimmy, a comedian, made a joke.  Get over yourself.

ADDED at 1:32 PM 6/16/21: And, Ana, your use of the term "f*g" not so long ago in the work place is also well known by people who worked with you -- as are your 'jokes' that speak of homophobia, so keep pulling at that strand and see where it lands you.