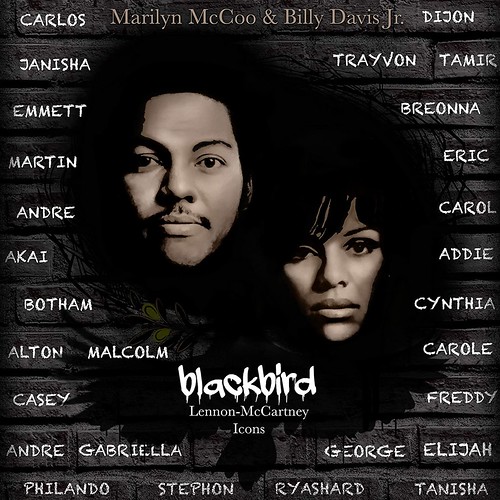 Kat: This is the dawning of the age of asparagus, the age of asparagus, asparagus.  The 5th Dimension?  You know them.  Even if you think you don't know them or their music, you probably do.  The group started charting in the sixties and had one hit after another.  Often, they had hits covering Laura Nyro songs.  They had top forty hits with Laura's "Blowin' Away" and "Save The Country," a top 20 hit with "Sweet Blindness," a top five hit with "Stoned Soul Picnic" and a number one hit with "Wedding Bell Blues."

If those were the pop vocal group's only hits, they'd have earned a place in musical history but Billy Davis Jr., Florence La Rue, Marilyn McCoo, Lamonte McLemore and Ronald Townson had many other pop hits.  They also hit the top forty with "Living Together, Growing Together," "Paper Cup," "Carpet Man," "Together Let's Find Love," "Puppet Man" and Ashford & Simpson's "California Soul."  They had top twenty pop hits with the Mamas and the Papas' "Go Where You Want To Go," "Working On A Groovy Thing," "Love's Lines, Angles and Rhymes" and "Never My Love."  The group had top ten pop hits with "Up, Up and Away," "If I Could Reach You" and "(Last Night) I Didn't Get To Sleep At All."  They made it all the way to number two with "One Less Bell To Answer."  And their second number one was "Medley: Aquarius/Let The Sun Shine In (The Flesh Failures)."  And that's just the BILLBOARD pop charts.  Twenty top forty pop hits.  Eleven of their albums charted in the top forty on the BILLBOARD R&B charts.  Two of the group's recordings won the Grammy for Record of the Year ["Up, Up and Away" and "Medley: Aquarius/Let The Sun Shine In (The Flesh Failures)"].  "Up, Up and Away" and "Aquarius" also each won a Grammy for best group vocal performance.

Maybe the titles listed brought recognition for you, but I'm pretty sure most readers will have some idea of who The 5th Dimension were at their height -- 1967 to 1975.  Like Cher, Tori Amos and so many other worthy artists, legendary even, they have never been inducted into The Rock & Roll Hall of Fame.  They weren't very successful in the United Kingdom and that's a shame because that's usually the country American music lovers can count on to launch a reappreciation.

But they were a huge group and their songs were enjoyed by millions even if, like my nephew Jordan, you thought they were singing "Asparagus" and not "Aquarius."

After 1975, Billy Davis Jr. and Marilyn McCoo left the group.  The two were married in 1969 and have often performed together including landing at number one in 1977 with their duet "You Don't Have To Be A Star (To Be In My Show)" and also winning a Grammy for their vocal performance.

They continue to tour and record.  And they've got another hit album with BLACKBIRD.  From their Twitter account:

Our album  “Blackbird: Lennon-McCartney Icons” is out NOW! We are filled with gratitude to be able to put out a body of work that we are so inspired by and passionate about. We are all #blackbirds. We hope you enjoy the album. You can listen here!

They discuss the album in the video below.

The new album, as FORBES noted last month, topped the charts.  All this time later, the singing of Billy and Marilyn not only still registers, it thrives.  And they continues to move the listener, as demonstrated by Marilyn's performance of the title track.

For anyone in the world who doesn't know, Lennon-McCartney refers to two other hitmakers who started out in the sixties, John Lennon and Paul McCartney.  This collection finds Billy and Marilyn working through the Beatles' catalogue, yes, but also grabbing a McCartney song ("Silly Love Songs") and a Lennon song ["(Just Like) Starting Over"] from their post-Beatles period.

The ten song collection is making a comment about the struggle for equality and it does it in a tuneful manner that doesn't clobber you over the head.  It really is an artistic statement.  Yancyy, Natalie Hanna Mendoza and James Gadson are among the artists joining in on BLACKBIRD: LENNON-MCCARTNEY ICONS.

My favorite track is probably "Got  To Get You Into My Life" or "Yesterday" but they're all strong and interesting.  It took me a second to get into their version of "Starting Over" but, once I did, it blew me away as well.  You'll have your own personal favorite among the ten.

Here they are doing "Help!" and see if that doesn't make you want to listen to the whole album.

Again, the album is BLACKBIRD: LENNON-MCCARTNEY ICONS and it's recorded by two icons: Billy Davis Jr. and Marilyn McCoo.  My nephew Jordan?  He told me about the album.  "Remember," he asked, "when I was a kid and used to sing 'Age of Asparagus'?"  Uh-huh.  He also told me that it's his favorite album of 2021.  Check it out.