Wednesday, June 23, 2021.  It's International Widows Day, Paddy Cockburn froths at the mouth over the GOP, the UK is said to lead the fight against ISIS in Iraq, and much more.

When the crazy's uncorked, you just have to shake your head.  A lot of e-mails have streamed in on the insanity of Patrick Cockburn.  In fairness, this isn't his 'town.'  We're aware of his lies and his shoddy reporting.  A woman's publicly executed by a mob in Iraq and he gets how she was killed wrong.  Days after publication, it's changed in his original article and in the repost at COUNTERPUNCH with no notice that he got the means of death wrong.  That's Paddy Cock Burn.  The Arab world has never mistaken him for an honest voice.  While idiots in the US and UK have thought, "He works so hard" or some other similar nonsense, the Arab world has long been aware of his bias and hatred that's on full display in whatever article he writes.  He's another Gertrude Bell and only those truly (and willfully) ignorant of the Middle East could see that as a compliment.

Paddy's half-assed 'reporting' has never been hindered by facts or his lack of expertise.

It's a pattern that continues as he's tired and old and wants to be  with family that's migrated to the US (Paddy's not an American citizen -- that does matter, hang on for that). His brother Alex is dead but chose the US as home.  His niece Laura Flanders made her home here. Andrew's here, Olivia Wilde is here.  So apparently he believes that makes him an expert on US politics.  European who has spent years in various non-US countries 'reporting' who grew up in Ireland is going to weigh in on US politics.

Iraqi community members were the first to note -- and mock -- the garbage that COUNTERPUNCH posted on Tuesday -- no link to trash -- where Paddy's Cock Burn wanted the world to know -- he had to let it show -- that the greatest threat to the world ("the most dangerous threat in the world" -- his exact words) is the Republican Party.

To those watching as their military openly executes activists and journalists and anti-corruption officials (often taking a taxi from the scene of the crime, a crime usually caught on video), Paddy's hysterics come off as the nonsense that they are.

To those who lived through ISIS' hold on Mosul, Paddy just became a bigger joke.

But it's true around the world.  The Israeli government attacks Gaza but Paddy's okay with that.  It's not that dangerous apparently.  Or the pollution corporations carry out on a daily basis.  Or the governments that do nothing to address the climate crisis.

Despots rest easy, it's a political party -- one only in the US -- that's the most dangerous threat to the world.

He sports his stupidity loudly -- if not proudly -- as he attempts to draw parallels between today in the US and the US on the brink of the Civil War.  Yes, he is stretching.  Yes, he is an MSNBC addict who needs another hit of Rachel Maddow to get through the next few hours.

The Republican Party is a political party.  It's not going down the drain today or before the next election despite the hysterics of some -- include Diane Rehm on that list.  Ava and I almost wrote about her nonsense but decided she's old and she's clearly lost whatever grip she once had.  And, in 2008, she showed she was a coward when discussing the way primaries work -- she was right -- but received pushback from two DNC officials so she dropped a point she'd made several times each week for three weeks.  Diane's old enough to know that where the GOP is today -- in terms of status and 'survival' -- is nothing new and that the Democrats and the GOP -- the duopoly -- have frequently been at that point before.  As someone who majored in political science -- no, Paddy, I'm not offering to tutor you -- I can cite, at length, many, many wasted moments where the so-called press predicted a political party was over.  At the end of the last century, for example, the Democrats were over.  This wasn't a one or two year talking point.  Reagan had won the presidential eleccion in 1980 and again in 1984 and then George H.W. Bush won in 1988.  We had chatter passed off as discussion then the way we do today.  Nonsense about how the Democratic Party was over.  They'd never get the presidency again.  They should try to focus on Congress only.  This and that and it was the end of times and blah blah blah.

Cheap and easy 'coverage' -- space filler.  All you had to do was bring out an idiot like Paddy and they'd prattle on telling you what this or that meant.   They knew because they were communicating with . . . the various voices in their head.

It was garbage and it took attention away from real issues.

Sort of like the obsession with the GOP's current state does today.

I've never been a Republican and never will be.  I'm also not someone threatened by a political party's existence.  Unlike Iraq, the US political parties don't have militias.

They're a political party.  They're redefining who they are at present which is what they have to do -- and what the Democrats have done -- because that's how they survive.

Looking at the 2020 presidential results, there's no reason or basis for the constant keening over the state of the GOP.  Joe Biden got 51% of the vote, Donald Trump got 46% of the vote.

That's not a party in demise.

That's before we even get into the state of the media.  It's not fair, and it's never been fair, and it regularly demonizes the GOP while ignoring the Democrats.  Every attempt has been made in the last years to distort and take offense to any GOP statement.  Click bait or whatever, there's no attempt to calm the f**k down and learn some perspective.

THE NEW YORK TIMES publishes a column by a sitting US senator and then disowns it and apologizes.  That's nonsense.  Calm the f**k down.  You disagree with something on the op-ed pages?  That's why that section of a paper exists, for back and forth.  It's supposed to expose you to a variety of opinions not just preach to the choir.

Joe Biden snapped at a reporter last wee.  Several e-mails came in attacking me/this site for not covering it.

We had more serious things to address.  Why cover it?  As one blogger e-mailed, "It's how we chip away at Biden!"

It's the kitchen sink strategy.  They used it on Donald very successfully..  Inflate every thing -- big or small -- into a major event and trash and tarnish the person.  No one can survive the onslaught.

Some were angry because if it were Donald Trump, they insisted, we'd be all over it.

Where were you the last four years?

We didn't obsess over Donald's Tweets.  We didn't become unhinged because he was in the White House.  We rolled up our sleeves every day and did the work required.

Sadly, those paid to do the work required can't make the same claim.

I'm all for criticism of Joe -- the failure to address the climate crisis would be a good area to open up for criticism -- but in terms of this site, a 'reporter' asking a 'cute' question and getting snapped at isn't the most pressing issue for this site.  MEDIAITE covered it and should have.  It's their area and scope.  For it to be our area, it would have had to have had something more to it.

My favorite of the e-mails from the right over not covering Joe's exchange was the one that said this was a pattern of my refusing to call out Joe.

Really?  I know Joe and have known him for years but I have stated I believe Tara Reid.  I didn't vote for him.  I couldn't and wouldn't vote for him.  That's due to Iraq (I said he had to get honest and he didn't).  But I certainly wouldn't vote for anyone who did what Tara described or who did to Tara what he did to her --- Joe and his team controlled and fed the attacks on Tara.  Again, we don't have a fair press.  We have a gang of thugs who are off the leash and have no standards expected of them.

If I thought Joe's rudeness was the most pressing issue, we would have gone on and on about the exchange.  It didn't really have a huge effect on the world and it wasn't really anything we're interested in.

Patrick Cockburn knows nothing about US politics.  One would hope he'd know something about the world and dangers in it.  But if he's saying the GOP is the most dangerous threat to the world, clearly he doesn't know much about the world.

Anyone confused should pay attention to this video.

What makes that a news story?

Millions of Iraqis face an intolerably harsh summer, with Turkish dams on the Tigris and Euphrates rivers compounding a year of low rainfall.

The rivers, which account for more than 90 per cent of Iraq’s freshwater, were at historically low levels following scant winter rainfall in the region and snowmelt mainly in the mountains of Southern Turkey, which feeds into the rivers.

Turkey says it is also facing a drought and dwindling water supplies, but stands accused of holding on to supplies in its dam reservoirs.

On 7 May, Syrian Minister of Water Resources Tamam Raad called on Turkey to release more water from the vast Ataturk Dam.

On 21 May, Iraq’s Ministry of Water Resources said Turkey had released some water, but emphasised that the situation was a crisis.

In the capital Baghdad, photos of the Tigris showed an almost non-existent river.

So you've got water issues.  You aslo have pollution issues.  ALJAZEERA filed this report yesterday:

Iraq's becoming more and more polluted.  From the oil, from the weapons used (Depleted Uranium, White Phosphorus, etc), from the burn pits.  It's going to have major impact on the country and, yes, on the gulls.

#InternationalWidowsDay shines a light on the injustices experienced by widows. Organisations such as the Loomba Foundation help them to find their voice and help them to secure their rightful position in society. Donate here: https://cafdonate.cafonline.org/3447
7:06 AM · Jun 23, 2021·

Bayan Sami Rahman is the KRG's representative to the US.  She Tweets:

Kurdistan and Iraq have a disproportionate number of widows after years of war and genocide. On #InternationalWidowsDay let’s take steps to recognize the suffering of widows in our country & around the world, protect their legal rights & social status and enable them to be heard 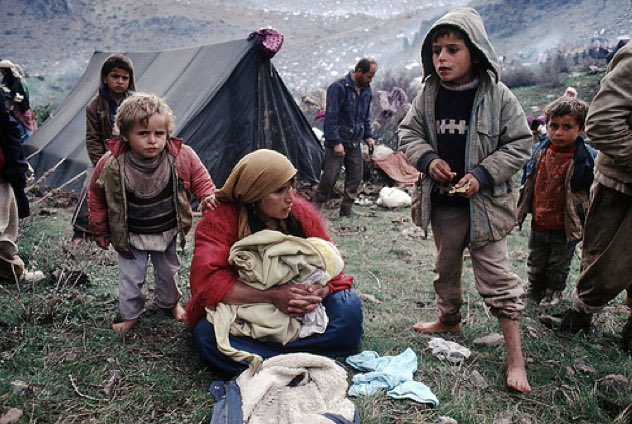 Back to crazy, Paddy Cock Burn's roll dog Moqtada al-Sadr's working overtime with an election coming up as he desperately attempts to convince people he's not the extremist he is.  Sura Ali (RUDAW) reports he's insisting that Saudi Arabia and -- AND -- Iran should not meddle in Iraq.  MEMO notes he's also deploring sectarianism -- as if his entire existence wasn't built on sectarianism. The Shi'ite cleric is in campaign mode ahead of the expected October elections.

In other news, ISIS remains in Iraq.  Despite media coverage otherwise, it is still active.  MENAFM reports, "A provincial police source stated that on Tuesday, Jun. 22 a father and his son were gunned down on Tuesday by the rebels of Islamic State (IS) in the Iraqi eastern province of Diyala."  And apparently the fight against ISIS is led by the UK.  THE NATIONAL reports:

In the first posting of the 65,000-tonne carrier, commanders said the ship attracted the interest of Russian warplanes.

“At the moment, we’re taking on the lion’s share of that operation over Iraq, which is a fantastic feather in our cap," said Commodore Steve Moorhouse, aboard carrier in the Eastern Mediterranean Sea. 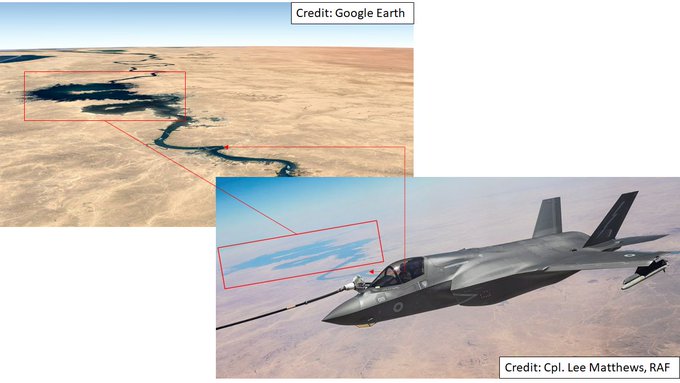