Kat:  There was a time when Liz Phair was one of the most respected musicians in rock.  She was a music guest on SATURDAY NIGHT LIVE, one on the cover of ROLLING STONE, an artist who produced one of the best albums of the nineties.

That all seems forever ago.  Yet EXILE IN GUYVILLE remains a classic, all this time later.  And a lot of the crap that Liz endured since seems sexist when you consider that, for example, Billy Corgan was never crucified in the same way and what he did to Smashing Pumpkins was far worse than any way Liz might have trashed herself and her own legacy. 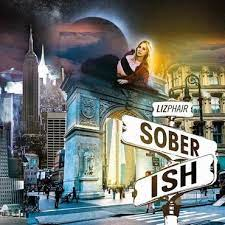 On the new album, SOBERISH, she reteams with Brad Wood who produced EXILE and the follow up WHIPLASH.  Her vocals benefit the most from this reteaming.  Liz was known for dead pan largely due to the flat affect she exhibited on "Never Said Nothing."  Largely forgotten in the decades since her debut, "Flower" and other tracks featured some animated vocals.  It's the life that's back in the vocals and it's, honestly, the life that's back in the lyrics.

2003's LIZ PHAIR was slammed for many reasons but one of the most obvious gripes might have been the lyrics of the songs she wrote with others that didn't find her sporting the complexity of "Ba Ba Ba" on the new album.  There was far too much space between each word and far too little thought in, for example, "Extraordinary."  That might have been why the song became a hit to begin with.  But it wasn't what we expected from Liz.

"Soberish," the title track, finds her tripping through lyrics with the wild abandon that first drew so many of us to her songs.  "Why do we keep dicking around?" she asks on this song

I'm asking you
Tell me, why do we keep dicking around?
Waited such a long time to be with you
Now I'm chickening out
I've got so much to say
Somehow it's never the right thing
I mеant to be sober
But the bar's so inviting

Liz has to trip through the lyrics because, in doing so, she enriches them and that's what her followers expect.  The songs grow as they move, the meanings may double back, but even when they do, they become thicker and more knowing.

On SOBERISH, she seems to finally get at what she was planning with WHIPLASH, a layered and textured sound that matched her lyrical approach.  I never found WHIPLASH convincing -- and still don't -- but I do get it with SOBERISH.

It's as though she's arrived at the moment where her talent and her execution are both at their height and the art just flows.

I love her vocal and  the guitar but I think the story in the lyrics is among her finest:

My heart is a lonely street

When you're far away

Don't you miss me baby?

Why don't call you and say?

I've been working so hard

Most of it fun, but some of it grey

Half the time I'm so scared

I care so much

I imagine that you and I touch

I've been working so hard, most of it fun

But some of it grey

We've been shooting all night

But the scenes are done

And I've got my friends To pick up thе loose ends

And I've got your picturе until I see you again

But it doesn't whisper to me

All the things In need to hear

And I've been singing all night

But the songs isn't done

They've got holiday lights up in the street

When will you come home to me?

When will you come home to me? W

hen will you come home to me?

When will you come back home to me?

This is not EXILE IN GUYVILLE II.  I know a lot of people would want that.  I get the feeling that it's the last thing Liz ever wants to do.  And that's okay, if she's doing something this strong, it's okay that it's not the move we're all waiting for her to make.

She's firing on all cylinders and has created a solid -- even great -- album with SOBERISH, one that will only grow stronger and deeper with repeat listens.  "Dosage," "Spanish Doors" and "Sheridan Road" are the tracks that immediately stand out to me but "Rain Scene" and "Soul Sucker" are burrowing into my mind, further and further, with each listen.