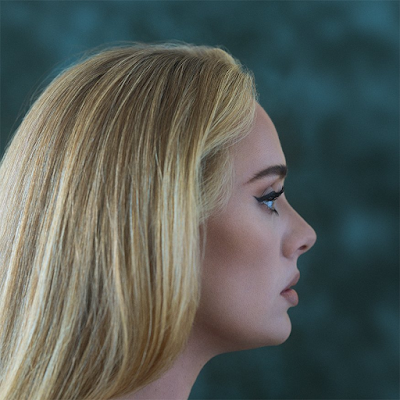 30 is Adele's latest album.  And Adele's not averse to financial gain nor is she publicity shy.

In the lead up to her first album in five years, Adele has spent weeks and weeks promoting 30.  She's done interviews, she's talked Peppa Pig, she's talked the end of her marriage, she's talked her new romance, her mental health, this and that.  She's honestly talked a little too much for my liking.  Especially, in the CBS special that kicked off last week, ADELE ONE NIGHT ONLY.  Singing?  I would've gladly watched Adele in the multi-hour special had she just been singing.  But instead, we'd get a song here and then a lengthy medley of tired topics as Oprah Winfrey -- in beige -- asked Adele -- in white -- the most mundane and boring questions in the world.

Who in their right mind thought that Oprah was the person to interview a musician?  We got her high-priestess shtick, psycho-babble passed off as insight and the only real entertainment was watching Adele straining repeatedly as she tried not to squint in disdain as Oprah prattled on.  At one point, Oprah pretended to offer 'insight' by stealing from BBC and HBO's TRACEY ULLMAN'S SHOW where Tracey plays Adele -- an Adele who's struggling to record now that she's found happiness.

It was a lot to put up with but I guess you can endure a great deal when you're releasing new music in a soft market.

She went into Friday with not just an expected strong seller but with an expected massive seller.

However,  this is the pandemic era and Pete is Secretary of Transportation.

The pandemic continues and we are now having supply issues.

Buying Adele's new album should have been the easiest thing in the world.

If you stuck to streaming, it was.

If you were wanting a vinyl copy, lots of luck.  Thanks to Pete, you were on your own.

I wanted to support independent record stores so that was my first two stops on Friday.  But after two failed efforts, I just took my eager ass on over to the Target store on Mission Street.

This was a test of the economy and the supply lines.  The grade is a solid F.

Diana Ross' great new album THANK YOU caused problems for me, you may remember.  Mainly, that AMAZON didn't deliver on the Friday that they promised (it was four days later).  Okay, Diana's on DECCA. A historic label, it's not really one of the big majors in the US these days.  So maybe that accounted for some of the problems?

Adele's on COLUMBIA RECORDS (SONY) and it's one of the largest labels, it rivals WARNER BROS for the honor.  So surely, Adele's much publicized album would be easy to get day of release, right?

53 community members agreed to help me with this study, to join me in being "sidewalk social scientists" -- as Debbie Harry once sang of in Jimmy Destri's "11:59."

Milwaukee and Detroit, come on down.  Take your bows.  The three people participating in this study got the albums on Friday without making multiple trips.

Some were like Jocelyn in that they ordered the album from AMAZON which promised them delivery by Friday but it actually arrived a day late.  (Jocelyn and 17 others had that experience.)

The other 34?  Marcia details her story in "Adele and Mormons."  No one had more of a problem than Brandon in Texas.  Brandon tried to use Walmart.

Five times.  And five times they failed.  I asked Brandon why he kept trying the same store?  He explained that he didn't.  There are multiple Walmarts in Tyler.  There are three that are superstores and carry vinyl and that's the three he used to order from.  He explained that, on the website, these albums were in store and he could pick them up or have them delivered (or wait three days and have them shipped).   After the last cancellation, he even went to one of the stores -- after calling first and being told that they had multiple copies of the vinyl record in -- only to find that the store he drove to never had the vinyl copy and had only received the CD copies of the album.  There was a huge display for Adele and it had nothing but CDs.

By that point, Brandon and I were beyond exchanging e-mails and were actively speaking on the phone.  He ended up going to Target as it turned into Saturday night and purchasing the vinyl album there (they had the regular vinyl only and not the deluxe white vinyl printing).  Explaining he was on the phone with a friend, Brandon asked the worker in the electronics area if they had gotten a lot of vinyl copies in?  Nope.  They only had five and they put those out Saturday afternoon.  (On Friday, they had only received CD copies.)

Many others went searching.  By Saturday, all but the ones who had ordered from AMAZON ended up doing a troll through their city in search of the album and, after three, four or five stops, finally finding it.

Please note, Adele busted her ass to promote this album.  There have been NASA space missions that got far less media attention.

But the supply lines choked during the pandemic.

I'm sure 30 will be at number one on the next BILLBOARD chart.  I'm also sure that if everything had worked correctly, Adele would have sold as least twice as many copies.

It's a strong album.

Big complaint: There's no barn burner here.  There's no "Rolling In The Deep."

There are 12 solid tracks but, had I been the label head, I'd be Clive Davis saying, "I'm not hearing a smash single."  Not a stomp your feet and hit the dance floor track.

This is a real album and it's an artistic statement.  But it's not really going to increase the fan base.

25 was the worst album she's issued.  And so 30 is a miracle in that it makes us still care about Adele.  It does that, in part, by having actual music.  The droning and electronic feel of 25 might have been intended to conjure up something meaningful and current but it just played to me like a really worn out church organ.

30 boasts incredible musicians taking strong turns -- check out the piano work on "All Night Parking.".  These are songs -- and many are great songs.  Ballads abound.

The biggest music on the album, of course, comes from Adele's throat.

I have no idea, however, why her voice is f**ked with electronically -- like at the start of "Cry Your Heart Out."

"Can I Get It" is the most significant track on 30 vocally -- Adele goes after her vocals in the way she once did.

Back before she was ADELE in the US,  Wally, Ava, C.I. and I saw her perform in May of 2011.  C.I. had a friend who got us tickets and wanted C.I.'s take.  I was blown away.  At one point, between numbers, I told the gang I would catch this show in California when Adele came to town.  (I believe we were seeing Adele in DC, but you know my memory.)   "If she shows," C.I. said.  I didn't have time to ask what that meant because Adele was already starting the next number.

After the concert, we had to dart backstage and C.I. said, "Her voice is most likely shot so let's get in and out so she can get some rest."

But we go backstage and she's very gracious and sweet and hoarse.  Very hoarse.

She wouldn't make it through that first tour of the US.  She'd be out of commission for a whole month.

She was singing amazing but it wasn't good for her throat.  It took our May tickets going unused [C.I. note: June tickets, actually] for me to grasp what Adele was doing with her voice.  She does it especially on "it" in the chorus of "Can I Get It."  It's the way she bends notes that probably pulls us in but when she does it like that, she also harms her throat.

Her voice is gorgeous without her doing that and I think we'd all be thrilled, those of us who are Adele fans, with the other elements of her voice if she just stuck to them.  Maybe I'm wrong?

"I Drink Wine,'' for example, is a brilliant performance and a moving one and she manages that without strain or force.

But I still would have said, were I the label head, "It needs one more track.  Something strong and dramatic and fast paced."

25 was a bad album that could have buried her career.  30 is a real album, with real growth.  There's nothing to hate on it and nothing that's going to leave you feeling distant.  Every track grabs you.  But Adele would be wise, before releasing 35, to grasp that we want her voice to soar over some pounding drums.

If you're not getting what I'm talking about, think Annie Lennox.  I loved Eurythmics.  They seemed to lose steam around the time of "I Want A Man,"  so  I was glad when I heard Annie was going solo.  Then DIVA came out and tracks like "Why," "Little Bird" and "Walking On Broken Glass" really blew me away -- blew a lot of us away.  But she followed up DIVA with the bland MEDUSA and that was it.  In the US, she never had another multi-platinum album.  Hell, the follow ups didn't even go gold.  We can still count on Annie to burn the house down on TV -- her "Take Me To Church" on the Grammys, for example.  But on her own albums, it too often feels like she's coasting.

I don't get that feeling when I listen to 30.  But I am aware that it lacks the kind of hit song it desperately needs and that this isn't the follow up to the great 21.  Instead, it comes on the heels of the underwhelming 25.

If you're a fan, you'll love it.  But I'm not sure it's going to win over many new fans.  Equally true, it'll probably be a week or two before it will be easy for you to get a copy of it on vinyl.