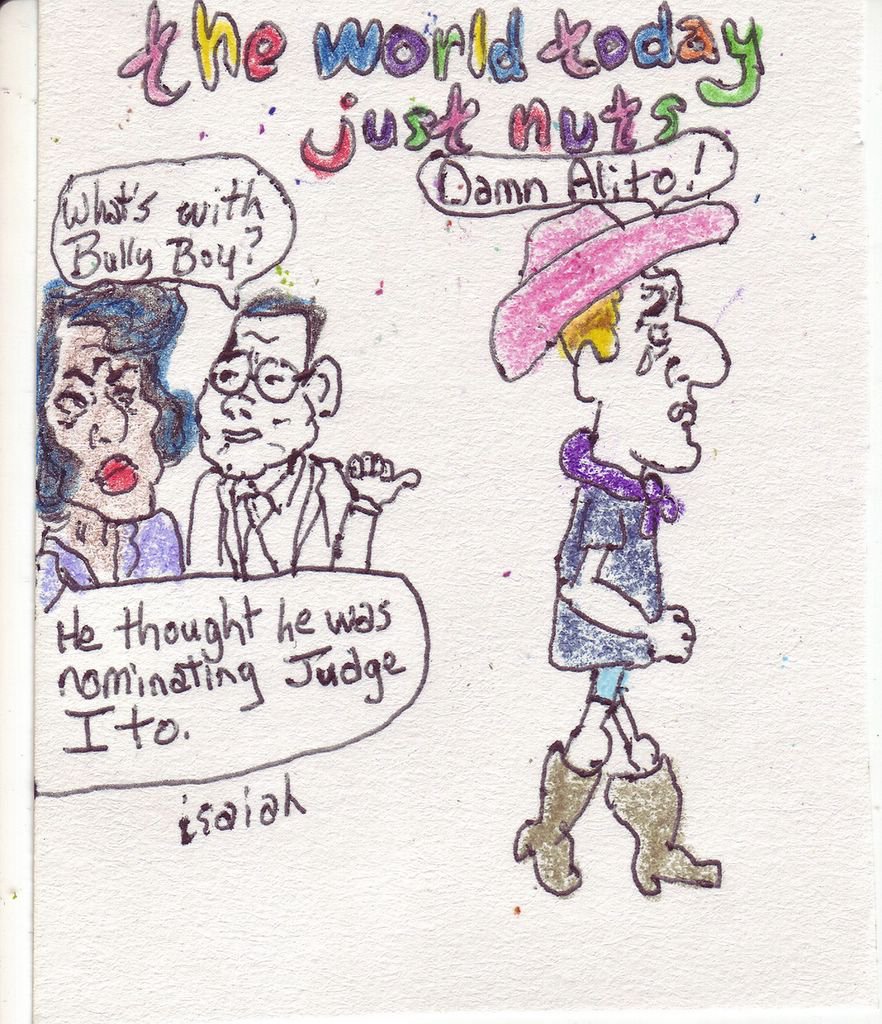 Not long after the inauguration of President Ronald Reagan in 1981, two young lawyers moved into cramped offices along the same hallway on the fifth floor of the Justice Department's headquarters.
One, Samuel A. Alito Jr., 30, was hired as a nonpolitical career lawyer. Promoted from the office of a New Jersey prosecutor, he quietly drafted Supreme Court briefs in the solicitor general's office. Former colleagues describe him as shy and serious, prone to spending long hours buried in case files. Charles Fried, the Reagan administration solicitor general, remembers Mr. Alito as "a very cultured man" who was more likely to spend their lunches together talking about books and ballet than politics.
The other, John G. Roberts Jr., 25, arrived fresh from a clerkship for Justice William H. Rehnquist of the Supreme Court, and entered the department a rung higher than Mr. Alito, as a presidential appointee assisting the attorney general on a variety of matters. Mr. Roberts was handsome and funny, former colleagues say, and hard not to like.
A quarter-century later, their contrasting styles will be on display again this week in the Senate hearings on the Supreme Court nomination of Judge Alito, now on the Court of Appeals for the Third Circuit. But if Chief Justice Roberts had the more political job then, it is now Judge Alito who faces more political opposition, in part because of statements he made in 1985 to persuade the administration's leaders that he, too, was a conservative at heart.

The above is from David D. Kirkpatrick's "Two Legal Careers That Diverged May Intertwine Again" in this morning's New York Times and it's a really bad article. The "contrast" (to breakdown Times' speak) is that Roberts rubbed shoulders with the media (many of whom then went on to cover his confirmation). Alito's a little more out of the loop. That's the "contrast" for the Patty and the Cathy of the Smell-a-lot days. And you can't wax about Reagan and Smell-A-Lot without quoting Edwin Meese (as a reliable voice for additional laughs). Only in the mainstream media.

(Patty and Cathy refer to the characters from The Patty Duke Show, in case younger members are scratching their heads. And for anyone who watched the show, no they were not "as different as night and day." Though no doubt some at the Times thought they were. Meanwhile, just sing to yourself, "You can lose your mind, when Justices . . . are two of a kind.")

(And the illustration is Isaiah's The World Today Just Nuts from November 6th. We should have a new one up tomorrow morning. This isn't a case of waiting on Isaiah, this is an e-mail problem.)

Mia notes Cindy Sheehan's "The Opposite of Good is Apathy" (Common Dreams):

Hillary Clinton told me that the "wheels of government grind slowly." This is a tired cliché and it is unacceptable blather while the war machine is grinding the bones of our children. It is time for us wide awake Americans to make our elected officials speed up the timetable for withdrawal from Iraq.
If I hear one more rendition of "We Shall Overcome" and then watch the vigilers or marchers go home and turn on their TV's and crack open a brewsky content in the fact that they have done something for peace that day, I am going to scream! We can't overcome unless we take the proverbial bull by the horns and overcome!
Hold your vigils and marches in relevant places: such as warmongering local Congressional offices. So many Senators and Congresspeople come to mind. Or in front of a recruiting station. Or Federal Buildings. Or military bases. Then instead of going home and cracking open a beer, or uncorking a bottle of wine, sit down and say "we aren't leaving until you call for an immediate end to the occupation of Iraq." Put your butt on the line for humanity.
Change will not happen until we make it happen. We can't make change happen by wishing or praying that it will happen.
We actually have to do something.

The National Security Agency, the top-secret spy shop that has been secretly eavesdropping on Americans under a plan authorized by President Bush four years ago, destroyed the names of thousands of Americans and US companies it collected on its own volition following 9/11, because the agency feared it would be taken to task by lawmakers for conducting unlawful surveillance on United States citizens without authorization from a court, according to a little known report published in October 2001 and intelligence officials familiar with the NSA's operations.
NSA lawyers advised the agency to immediately destroy the names of thousands of American citizens and businesses it collected shortly after 9/11 in its quest to target terrorists in this country. NSA lawyers told the agency that the surveillance was illegal and that it could not share the data it collected with the CIA or other intelligence agencies.
The lawyers said the surveillance could result in numerous lawsuits from people identified in the surveillance reports, two former US officials told the Houston Chronicle in an October 27, 2001, report, and was illegal despite any terrorist threat that existed in the days following 9/11.
By law, the NSA cannot spy on a US citizen, an immigrant lawfully admitted to this country for permanent residence, or a US corporation. But, with the permission of a special court, it can target foreigners inside the United States, including diplomats.
The revelation raises new questions about the legality of the NSA's domestic spying initiative, authorized by President Bush in 2002, which has come under intense scrutiny by Republicans and Democrats and will likely lead to Congressional hearings.
The fact that the NSA has purged the names of thousands of Americans and businesses it collected after 9/11 suggests that at the time there were questions about the constitutionality of the agency's efforts to combat terrorism by secretly spying on Americans.

Remember to check your inboxes for the gina & krista round-robin today and that Gina and Krista will be doing special edition round-robins each morning throughout the hearings.

And on the Alito hearings, remember this:

Mon., Jan. 9 through Fri., Jan. 13
The Pacifica Radio Network is bringing you the Samuel Alito Senate Hearing for nomination to the United States Supreme Court live!
Verna Avery Brown teams with Mitch Jeserich from Free Speech Radio News and Pacifica National Affairs correspondent, Larry Bensky, to bring you the controversial nomination hearing of Samuel Alito for United States Supreme Court, live.
Anchors: Larry Bensky, KPFA; Verna Avery Brown, WPFW; Mitch Jesserich, FSRN. The schedule of hearings includes a one hour pre-show on the opening day, and an half-hour wrap-up show each evening. Live analysts will join us in the booth and via telephone throughout the hearings.

You can listen to the coverage over the air if there's a Pacifica station in your area and, in addition, you can listen online at Pacifica. (NPR listeners can look forward to Cokie passing on conventional "wisdom" and DC gossip -- as she does most Mondays --because NPR isn't covering the hearings live. "Look forward to"? Well someone must look forward to it, right? NPR keeps putting her on the air for some reason.)

Joke of the day: the e-mail address for this site is common_ills@yahoo.com.