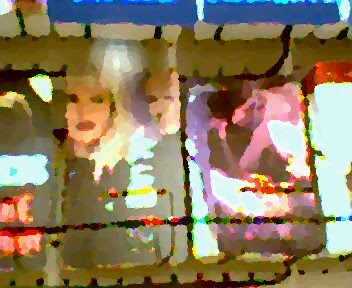 Nothing in print for the left.

No big treaties, no big thoughts. A few managed to piece together clip-jobs throughout the year. For example, Amy and David Goodman managed to churn out another clip-job and about the only good thing we can say for Standing Up To The Madness is that it provided Ava and C.I. with the raw material for a thousand jokes. Our personal favorite: "Standing Up To The Madness' slogan is 'It Takes Two.' The Donny and Marie of the faux left return to handle a cut-and-paste clip job so daunting it truly does take two."

There was ____ who 'entertained' in Chicago and thought they could do so under the radar but Elaine caught that little performance and wrote it up for the gina & krista round-robin. You can be sure that should ____ release a book in 2009, Ava and C.I. will tear the little cheerleader a new one.

Because that's really all the left was, a bunch of Barack cheerleaders. When the man now known as Coward Zinn elected to endorse the Corporatist War Hawk Barack, the only question was whether the left was carp or catfish? Regardless, it rotted at the top.

You really have to wonder who these 'writers' expect to sell books to in the future? The people spending money on their books were hardly DLC-ers. So it should be really interesting to watch the Norman Solomons show up with their next bad book and attempt to interest anyone in it.

It got so bad that, by June, one of us would participate in the round-robin's roundtable solely to ask Ava and C.I., "So ___'s putting out a book this month. Kool-Aid drinker or independent thinker?" As all know, nothing but Kool-Aid drinkers.

It really is amazing how little Iraq mattered to the alleged left after they had used the 2002 vote to tar and feather Hillary Clinton. They stayed silent as Barack immediately began backing off his 'pledge' in June. They stay silent today as Barack and Joe Biden -- two who grandstanded against the so-called SOFA throughout 2008 -- did nothing to halt the White House from ramming that treaty through or, in fact, even publicly offered a word of objection after the election.

2008 was truly about thinning your shopping choices and that had nothing to do with the failing economy but everything to do with, as Bob Dylan once sang, "Seeing the real you at last."

Which brings us to music, doesn't it? A good thing because the first book published in 2008 that members got excited about was a music book, Janis Ian's Society's Child: My Autobiography. It can be purchased at Amazon where it's currently selling for $16.98 ($26.95 list price). You can read an excerpt from the book here (HTML) or here (PDF).

Janis Ian is a gifted singer-songwriter who began her recording career long before she was an adult. (The title of her book comes from the song she first made her name with.) Kat reviewed Janis Ian's Folk Is The New Black in 2006. Those who prefer or need audio can click here for NPR, where she discussed the book with Robert Siegel for All Things Considered.

At her site, a fact sheet notes:

Inspired by Jim's questioning in Third's book feature on Sunday, we asked C.I. to name one other artist, not listed, who has recorded Janis Ian's songs? "Read the names to me again," C.I. said. "Okay, here's one not on the list. Barbi Benton. She did a surprisingly strong cover of 'In The Winter' back in the mid-seventies."
All of the above adds up to how Ian is able to write an autobiography so moving just as the life she's lived has provided her with so many amazing songs.

In a year crowded with choices, Society's Child would have stood out. In 2008, it's a rare blessing. We hoped Chris Hedges would release a book, Hedges being one of the few independent voices the left had left. He has two due out in 2009. 2008 could have ended with only Ian but two books published in September grabbed the interest of the community. David Bacon's Illegal People -- How Globalization Creates Migration and Criminalizes Immigrants (Beacon Press) was puzzling especially when compared to Janis Ian's book. Ian has spent a lifetime managing to put the heart's feelings into words so her ability to write such a moving book was a non-surprise in retrospect. Bacon, however, is a photo-journalist as well as a text-journalist and while his images are always rich with power and emotions, we were honestly surprised by his ability to do so much with words on such a complex subject. His book was informative and a real journey.

If you haven't had time to pick this book up yet, make a point to do so. Laura Carlsen and Mary Bauer explored this powerful book at Foreign Policy in Focus.

Which brings us to the third book. Paul Street was one of the most consistent independent voices of 2007 and 2008 that the left had. So in September when his Barack Obama and the Future of American Politics was released there was a variety of responses. Marci spoke for more than herself when she noted on her ballot that she waited "about four weeks" before buying the book "out of fear that I'd open it and realize, 'They got to him too'." A number of members expressed similar feelings. However, a larger group also expressed frustration and Street's book might have ranked even higher were it not for the economy. A number of members wrote they'd like to vote for it but were still waiting for it at their library. And Dallas community members waiting have the bad news that although the book is in their library's computer system with one copy at a branch, the book has never arrived at the branch. Those lucky enough to read the book can consider themselves very fortunate indeed. Is this site still going to be around this time next year? C.I. planned to take it dark right after the election but we've got a six-month extension and C.I. may extend again. If that does happen, we will make an exception for Street's book and allow it to be voted on in next year's poll as well because there are so many members waiting for it at libraries. Eli, Jonah, Trina and Keesha helped us count the votes and they each have a copy which they are more than willing to pass on to members who have been waiting for a copy as are we. Eli and Keesha are going to coordinate that list so e-mail them if you've been able to get a copy and would like to read it. Keesha asks that anyone who receives a copy remembers, "It's a book, not a Holy Bible. If a page gets bent or stained, it's not the end of the world and you do not need to replace it before passing it on to the next in line." But it is a big book, with big ideas and Street and Bacon were the only thinkers on the left to produce anything in book form in 2008.