Ruth: 2008 for public radio was the year that you realized just how little your money mattered. You donated, you pledged, and always you were told how much you were needed, how much you were appreciated, how you made it possible . . .

The last one was nothing but them trying to make you accomplices to their crimes. Public radio exists allegedly to provide alternatives. That is true of NPR and true of Pacifica. And they both like to grand stand on how they offer something you will find no where else.

2008 was when many wondered if that was: Gainful employment for hacks.

Whether it was Pacifica or NPR, neither really had time for U.S. House Rep. Dennis Kucinich when he was in the race. Diane Rehm, due to her old radical days, did make time for Mike Gravel. That might count for something were it not for the fact that long before former Senator Gravel dropped out of the race, she had reduced it to a two-way race between Barack Obama and Hillary Clinton. It made it easier for Ms. Rehm to join the chorus of deranged Hillary Haters. If there was a lie that Ms. Rehm's shaky voice would not broadcast, color me surprised. It was especially cute to hear her interrupt a guest to insist, "When he was eight-years-old!"

We all know that talking point now, right? Bill Ayers and Bernardine Dohrn. Barack Obama's friends and colleagues -- when he needed them. Members of SDS who broke off into Weatherman. All before 1969 and Mr. Obama was born in 1961. 1970 is when Weather Underground is formed. Weather Underground remains active for five to six more years. They are not a "sixties" group, they are formed in the seventies. But the fright-wing loves to say "sixties" as a scare tactic and, in doing so, they shot themselves in the foot because it allowed liars like Diane Rehm to repeatedly and wrongly insist, "Barack was just eight-years-old."

It was truly amazing to listen to public radio and hear one lie after another broadcast as fact. Following the election, Mr. Ayers and Ms. Dohrn showed up on various programs, including Amy Goodman's, expecting to be hailed as conquering heroes and they had every reason to expect that to take place because, during the campaign, the press portrayed them as such. So you could hear, for example, David Corn offering justifications and excuses for Weather Underground on NPR as easily as you could hear someone doing the same on Pacifica.

After the election, Katha Pollitt finally spoke up. If I am supposed to be grateful, I will save my gratitude for the likes of Ava and C.I. who spoke up repeatedly while it mattered (for example, here). I will save my gratitude for C.I. and Elaine (click here for Elaine's final statement on the issue) who know Mr. Ayers and Ms. Dohrn and would have preferred to have written about anything else in the world but, when the lies and the spin took hold, stepped up to the plate to do what our alleged professional journalists refused to.

A listing of all the moments when public radio behaved unethically, when they did things that should result in the loss of broadcast licenses, when they flat out lied and knew they were lying, would fill a book. Instead, I will focus on the most outrageous moment during the primaries and the most outrageous moment during the general election campaign. It is a matter of personal choice and some may think of other examples but these are the two strongest in my mind.

For the primaries, no moment was more appalling than a February broadcast on KPFA. The broadcast was so outrageous Ava and C.I. immortalized it in "Panhandle Media" -- thereby giving the appropriate term for these people and their media that are unable to make it without begging. Larry Bensky and assorted 'experts' spent two hours discussing that evening's debate between Ms. Clinton and Mr. Obama. Multiple 'experts' -- none of whom was supporting either candidate -- and, somehow, they all saw Mr. Obama as the winner and they all found a way to sneer and snarl at Ms. Clinton.

Somehow, Larry Bensky, KPFA, and the guests did not feel that was knowledge that the listeners deserved.

It was dishonest and unethical.

No talent? How else to explain the tired little act Laura Flanders performed on that February broadcast where she trotted out "cackle" to describe Ms. Clinton's laugh? Even the MSM had long moved beyond that sexist term.

I voted for Ralph Nader and I want to offer a sidebar here. Mr. Nader and Cynthia McKinney ran for president. You would not know that to listen to public radio. NPR seemed to think that one program including the two every six weeks was the equivalent of their daily Barack Obama and John McCain coverage from July through election day. Pacifica was no better and, as Ava and C.I. pointed out, when former U.S. House Rep. McKinney participated by phone on a KPFK program, no sooner did she hand up than the male host began trashing and ridiculing her.

My advice to supporters of independent and third-party presidential candidates is to stop settling for the crumbs tossed at their candidates. It really should not have required Ava and C.I. pointing out that Amy Goodman repeatedly asking Ralph Nader why he was running and if his running would hurt a Democratic candidate sends the message (here for one example of Ava and C.I. calling this nonsense out) -- regardless of Mr. Nader's answers -- that he is less than a real candidate, that his run is unworthy. Ms. Goodman spoke briefly with Mr. Obama and never asked him to justify his own run for office. Greens and independents need to make it very clear to the media that this is unacceptable. Until they do, they will continue to starve on the crumbs while pretending they have been invited to dinner.

Onto the most outrageous moment in the general election. If you have just returned from outer space, let me explain that Governor Sarah Palin of Alaska was selected by G.O.P. presidential nominee John McCain to be his running mate. The rest of us know that and saw the attacks that took place. Some with very weak memories are already rushing on to another topic while others who are natural born liars think they can avoid acknowledging how beyond the pale the attacks on Governor Palin were. No surprise, the leaders there were allegedly former Republicans now claiming to be 'progressives.'

They fed and fueled the climate where everything could be turned into an attack on Ms. Palin, facts be damned.

Enter Ms. Rehm and E.J. Dionne. On Ms. Rehm's program October 3rd, a caller phoned in to flaunt his ignorance. He was calling about a remark made by Governor Palin during the debate between her and Senator Joe Biden the night before. This is the passage from the debate:

We'll know when we're finished in Iraq when the Iraqi government can govern its people and when the Iraqi security forces can secure its people. And our commanders on the ground will tell us when those conditions have been met. And Maliki and Talabani -- also in working with us -- are knowing again that we are getting closer and closer to that point, that victory that's within sight.

The caller grabbed the last sentence starting with Maliki and ridiculed Ms. Palin for suggesting that the Taliban was working with the U.S. He dubbed it a "tremendous blunder."

Mr. Dionne and Ms. Rehm are the ones who should be embarrassed. "Maliki" refers to Iraq's prime minister, Nouri al-Maliki. "Talabani" refers to Iraq's president, Jalal Talabani. If the NPR host and the Washington Post scribe do not know who Jalal Talabani is, it may be time for both of them to retire. But they know who President Talabani is, they just could not resist the opportunity to smear Governor Palin with lies yet again.

In the Democratic Party primary, I supported Senator Clinton. When the nomination was stolen from her, I supported Ralph Nader. Throughout it all, I had admiration for Cynthia McKinney and Rosa McKinney running on the Green Party presidential ticket and for G.O.P. vice presidential candidate Sarah Palin. What a significant moment -- even though public radio was never interested in it or anything to do with women. Of all the photos during the election, this one made me happiest. 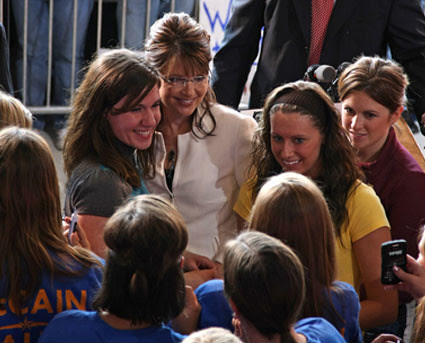 I did not vote for Governor Palin's ticket. But I could still smile with pride at the excitement of young women as they gather around the first woman to ever be on the Republican presidential ticket, only the second woman to be on a presidential ticket of one of the country's two major parties. Again, not a topic anyone wanted to explore. No program devoted a segment to Senator Clinton, the Honorable Cynthia McKinney, Ms. Clemente and Governor Palin. No program wanted to ponder the historic nature of those four women in 2008. Doing so would have required leadership. For all the talk of 'independence' and 'leadership,' public radio was nothing but a follower. A more high-brow version of the MSNBC cesspool in NPR's case. (There was nothing "high-brow" about Pacifica, it was pure cesspool.)

2008 was when public radio repeatedly made the case for its own extinction. If they are indeed correct that they cannot do without us, it is time to withdraw all of our support because what they are doing is not free speech and it is not journalism. Until they can implement some standards and actually follow them, they do not deserve a dime. All they proved in 2008 was why they cannot get hired by for-profit media.