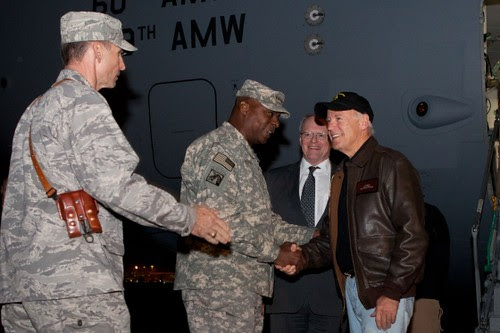 That's US Vice President Joe Biden arriving in Baghdad on Tuesday. Yesterday's snapshot focused on a number of things and I would not have assumed the topic that would result in e-mails to the public account would be my remarks about the Biden visit. I'll assume some of the visitors were dropping by for the first time. If someone in the press does an outstanding job, I'm more than happy to praise them. Few in the US do. They run with the pack, especially when it comes to Iraq coverage.

But I'm sure various outlets will be thrilled to know that they have (mindless) cheerleaders who e-mail and say, "That's so unfair to ____! How dare you!"

In yesterday's snapshot I praised AFP. They were the only ones doing the work. (Besides Ann Curry who's Tweet showed more work than most of the 'reporters' mutli-paragraphed filings.) A few fans of certain outlets might need to learn to do the work as well.

While you feel that your outlet of choice was treated poorly, everyone got off very easy.

If you're unaware of it, and maybe you are, one of the excuses for cutting Iraq coverage is the 'expense.' It's just not cost-productive. That's why, at the start of 2009, ABC announced they'd cover Iraq via the BBC News. And quickly they 'forgot' that announcement and just walked away from Iraq. And has ABC sent Martha Raddatz to Iraq in 2011 once?

But all the outlets insisted that and it really came down to the following news oulets offering any significant Iraq coverage in 2011: CNN, McClatchy Newspapers, the New York Times, the Christian Science Monitor, the Washington Post and (doing their slow-fade apparently) the Los Angeles Times. And even those US outlets with staff in Iraq reduced their coverage. (NPR budgeted for Iraq but spent the money elsewhere.)

Point of fact, that's not how a country covers a war they're engaged in. It's not happened in the past and it should not have happened with the Iraq War.

But if I was in charge of a network's news or an editor or publisher and read the copy filed yesterday and was under pressure to keep costs down, I think I would have spent most of yesterday yelling over the phone.

Instead, I was laughing about it with an ABC News fried.

Now read that and go back and read whatever outlet you felt I was unfair to yesterday.

Those traveling on the plane with Joe will be billed, their outlets will be billed. When that bill comes in, I think they should have to justify what they accomplished on their trip and if all they did was repeat what the White House told everyone, I think it was money wasted. They could have stayed in the US, saved a lot of money and still acted as the White House parrot.

By the way AFP is not an American outlet. It was included because it tends to do strong work as was demonstrated yesterday when it did what American 'reporters' refused to, added details that weren't in a White House press release.

So while a number of you think I'm an ass -- and I probably am -- on this, I was actually being much kinder than you're aware. Though they can and do get away with what they did in the real world, in an academic setting they would have been ripped apart for re-working a press release into a 'report.' Most importantly, reporting is not taught as "Repeat whatever the government wants you to say without attribution and refuse to do any independent work on your own." Not in a free society.

We'll go over this later in today's snapshot and link it to the why that goes beyond lazy (hint in next entry). The following community sites -- plus Antiwar.com -- updated last night and this morning:

Plus Elaine's "Real news." In the US and the topic of Bradley Manning who is finally headed for a military courtroom and an Article 32 hearing on December 16th at Fort Meade, Maryland.
Monday April 5th, WikiLeaks released US military video of a July 12, 2007 assault in Iraq. 12 people were killed in the assault including two Reuters journalists Namie Noor-Eldeen and Saeed Chmagh. Monday June 7, 2010, the US military announced that they had arrested Bradley Manning and he stood accused of being the leaker of the video. Leila Fadel (Washington Post) reported in August 2010 that Manning had been charged -- "two charges under the Uniform Code of Military Justice. The first encompasses four counts of violating Army regulations by transferring classified information to his personal computer between November and May and adding unauthorized software to a classified computer system. The second comprises eight counts of violating federal laws governing the handling of classified information." Manning has been convicted in the public square despite the fact that he's been convicted in no state and has made no public statements -- despite any claims otherwise, he has made no public statements. Manning has been at Quantico in Virginia, under military lock and key, for months. In March, David S. Cloud (Los Angeles Times) reported that the military has added 22 additional counts to the charges including one that could be seen as "aiding the enemy" which could result in the death penalty if convicted. David E. Coombs is Bradley's attorney and he provided a walk through on Article 104.
And we'll close with this from Kevin Gosztola's "50 European Parliament Members to Obama: 'Concerned'and 'Troubled' About Treatment of Bradley" (World Can't Wait):

Fifty European parliament members have signed a letter to US officials to express concern about US government treatment of Pfc. Bradley Manning, accused whistleblower to WikiLeaks. Manning has been detained for well over five hundred days, and his pre-trial hearing at Fort Meade, Maryland, is scheduled for December 16.

The signers urge the US government to allow the UN Special Rapporteur on Torture Juan Mendez to meet with Manning privately. The need for Mendez to be granted a private meeting is justified by the fact that Manning endured abusive treatment when he was detained at Quantico Marine brig. Cited are the revelations that came from a Freedom of Information request that showed the Quantico staff had mostly ignored recommendations made by the medical staff of the brig.