2012 continued the pattern of disenchantment with what Hilda's dubbed "the static."  You know The Static.  You used to read it.  Remember when every lie uttered by Bully Boy Bush resulted in an angry column (and eventually a book) by Joe Conason?  Or maybe when David Corn was doing the same?  The community's old enough to remember when Guantanamo was an evil that had to be closed (it's still open) and when spying on Americans was considered outrageous (it got extended last week).  We can remember when campaign finance reform matter (before the 2008 general election when Barack became the first presidential candidate of the two major parties to forgo public financing).  We can remember when wars of choice were protested.

How many hours did we waste back then on Air American Radio and Pacifica Radio listening to people jaw away about ethics?  Only to find those still on the air today make excuses for Barack's wars, for Barack's stabs in the back.  Only to discover that all the things that mattered and matter to us were just political footballs for most of the pundit set as they went after Bully Boy Bush.

"Count all the votes"?  The cry of 2000 after the theft of the election?  Hell, in 2008, the Democratic Party was giving Barack votes Hillary won -- giving him votes in a state (Michigan) that he wasn't even on the ballot of -- because he chose to pull his name from that ballot.

The Static is just a bunch of noise that doesn't have any real meaning to the writer.  It's the equivalent of tossing everything and the kitchen sink at a political foe in the hopes that something will stick.  Producers of The Static include Conason, Corn, Jim Hightower, Amy Goodman, Matthew Rothschild, Jane Mayer, Randi Rhodes, Kris Welch, Naomi Klein,  Keith Olbermann, Aimee Allison, and many others who could publish a dated suicide note tomorrow and it still wouldn't interest us.  They have no ethics and only pretend to care about issues like war and peace and the people of the world.  They exist to whore for Democrats and what we really need on the left is a vice raid.  If that happened, the only pundits left standing on our side might be Chris Hedges (who wrote the community favorite Death of the Liberal Class) and Cindy Sheehan.

Until that happens, don't expect too many of us to pick up 'political' books -- both because we no longer trust the authors and also because we don't want to support their whoring.

As with last year, biographies were popular, especially autobiographies. There were big books and small books.  In the end, the most popular ten, as voted by members of this community, were . . . 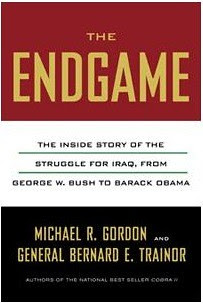 1) Michael Gordon and Bernard E. Trainor's The Endgame: The Inside Struggle for Iraq, from George W. Bush to Barack Obama.  This sprawling and ambitious book was the source of an epic fail book discussion at Third.  (Never published there, a segment was included in the audio edition of Hilda's Mix.)  Instead, we were left with four columns on the book that Elaine and C.I. wrote for the gina and krista round-robin.  The New York Times' Gordon and retired general Trainor examine the how the actions of two US administrations failed to bring about democracy or peace in Iraq.  By refusing to offer easy comfort food to either Republicans or Democrats, the book became an orphan of the public affairs programs as host after host pretended the book just didn't exist.  This really is a great book.  Ava and C.I. noted how it was vanished from the public affairs program.  We'll note how it was vanished by certain 'authors' like Thomas E. Ricks.  Wonder why Ricks wouldn't rush to praise this book?  The answer's in its opening pages, "Too many American accounts of the war in Iraq have left out the Iraqis, or cast them as little more than a backdrop for dramas that were played out in Washington or among American commanders in Baghdad. But they are essential actors in their own nation’s drama. For this reason, Prime Minister Nuri al-Maliki and rivals like Ayad Allawi, Massoud Barzani, and Adil Abd al-Mahdi share the list of the hundreds of interviews we conducted along with Iraqi generals, police commanders, tribal sheikhs, and student protesters."  If, like Ricks, you'd written several books 'about' Iraq but never managed to include Iraqis, you wouldn't want to promote this book either.

2) A second reporter for the New York Times, John Schwartz, comes in at number two with his book Oddly Normal: One Family's Struggle to Help Their Teenage Son Come to Terms with His Sexuality. This was a moving book.  As Elaine noted in her review for El Spirito, it's a book about the struggle to parent.  The author (and his wife) battle the differences between embrace and smother, creating spaces and neglect.  Elaine observed, "It touches a chord because no matter what you do as a parent, you will always realize an hour or a year later, you could have done it a different way and done it better.  This is an honest and moving book." 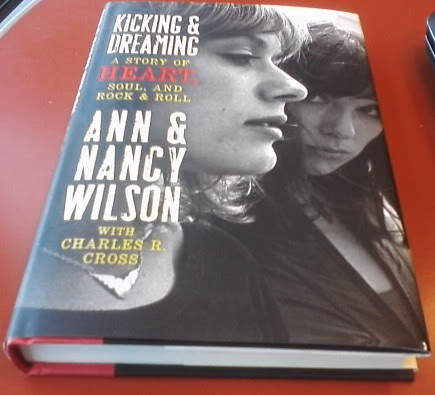 3) Ann Wilson, Nancy Wilson and Charles R. Cross' Kicking and Dreaming: A Story of Heart, Soul, and Rock and Roll.  Sisters Ann and Nancy Wilson formed the rock band Heart and finally got inducted into the Rock and Roll Hall of Fame this year.  They also joined with Charles R. Cross to tell their story.  As Ava and C.I. noted the point and counter-point Ann and Nancy bring to the book, "And in their different approaches, the two women bring different perspectives to enlarge the story they're sharing, a story that ultimately is about truth and honor and the hard fought wisdom that shapes us into not just who we are are but what we have become."  If we just covered audio books, this would have been the number one choice.


4)  Penny Marshall's My Mother Was Nuts.  Reviewing Marshall's comic biography for Polly's Brew, Doug observed in his conclusion, "Penny Marshall should write a volume of fairy tales.  Not only would it be charming, it would re-invent the genre as her book has just done with autobiographies." The actress came to fame on The Odd Couple and became a star as half of Laverne and Shirley moved on to star in one of the few memorable TV movies (Challenge of a Lifetime) before becoming a director (Big, A League of Their Own, The Preacher Man, Riding In Cars With Boys, Awakenings, Jumping Jack Flash and Renaissance Man).  Somehow she manages to share all of that in book form as well as what it's like being Gary Marshall's sister.  We'd be interested in seeing book sales because the highest rankings on this choice came from UK community members. (Highest rankings?  Our ballot to community members allows them to list five books and rank them.  That we have 'instant run-offs' -- something we recommend be used in national political elections.) 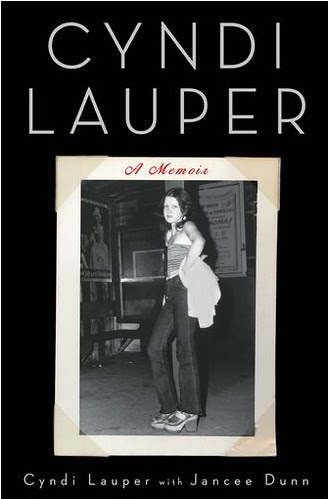 5) Cyndi Lauper's A Memoir written with Jancee Dunn.  For those voting on just the audio format, Cyndi's book comes in at number two.  Lauper emerged as a colorful personality and an amazing singer in 1983 with a string of hits including the classic anthem "Girls Just Want To Have Fun."  Readers of the book might want to remember the quieter hit that she co-wrote: "Time After Time."  As with that song, Cyndi's in a reflective mood as she talks about leaving home at an early age and why, struggling in a business that didn't seem to value her, finally making it and facing a new set of obstacles.  It's a very strong book and Ava and C.I. covered it for Third. 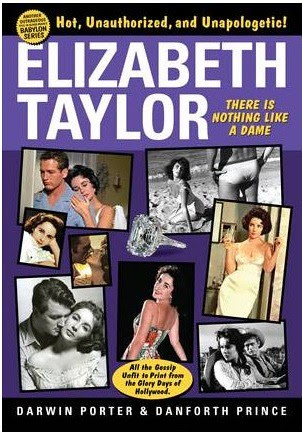 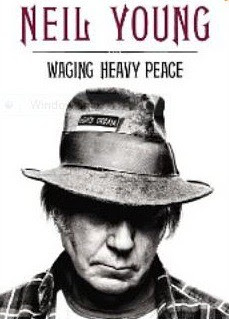 7) Neil Young's Waging Heavy Peace.  Mike reviewed this for Polly's Brew, noting that singer-songwriter Young has the building blocks others don't.  "Writing 'They met in the Hollies and the Byrds,' about two people he knows is impressive enough but the two people are legends David Crosby and Graham Nash.  The book includes the kinds of insight and access that few others could manage because their authors were never up that close."


8) William J. Mann's Hello, Gorgeous: Becoming Barbra Streisand.  Rebecca and Marcia reviewed another book ("book 'em friday: new barbra bio delivers!" and "William J. Mann's Hello, Gorgeous") that made the top ten.  Marcia observed of the book, "But what I found especially illuminating were the sections on Diana Kind.  That's Barbra's mother.  In most books,  she can come off cold and indifferent.  This book provides an accounting of what she told her friends versus what she told Barbra.  You get a much better understanding not only of a complicated mother & daughter relationship but also of who Diana was as a person."  For Rebecca, what stood out was, "probably his biggest contribution to the streisand canon is documenting how so much that we think just was what it was, turns out, was pre-planned and choreographed." 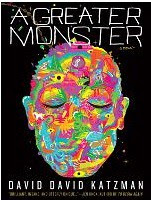 9)  David David Katzman's A Greater Monster.  This novel came out at the end of 2011 and Beth championed it near weekly in her column for the gina and  krista round-robin.   It is a jigsaw of writing and you find yourself  falling down the rabbit hole.  "A book to ponder and to read for the sheer life on the page," Beth observed as she offered the following sample paragraph:


Time is terrifying, time is unspeakable.  Clock-time lies down between moments . . . but distance warps with velocity, time bends with velocity.  Frames of reference.  Are not absolute.  Are selfish.  A private reality.  Clocks have a life of their own.  Framed by references.


10) Louise Erdrich's The Round House.  This seems a fairly simple and straightforward tale.  However, the complexities grow as it unfolds and they layers and subtext will leave you eager for a reading buddy to discuss this with.  DeShawn reviewed this for the gina and krista round-robin. It was the third most popular book for those voting based on the audio format and it was the top novel in that format.  As DeShawn noted in his review, "In one word: engrossing."