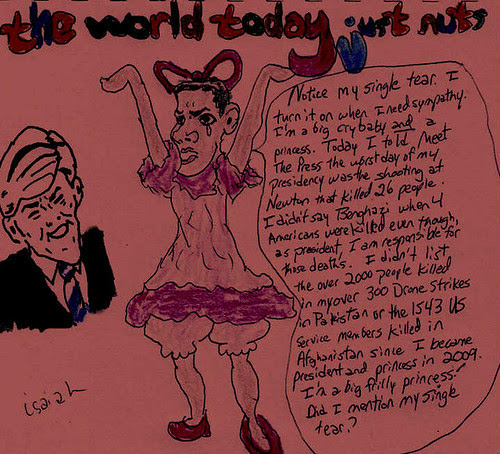 Isaiah's latest The World Today Just Nuts "Princess and President."  Barack does a ta-dah! while David Gregory grins.  Barack declares, "Notice my single tear.  I turn it on when I need sympathy.  I'm a big crybaby and a princess.  Today I told Meet The Press the worst day of my presidency was the shooting at Newton that killed 26 people.  I didn't say Benghazi when 4 Americans were killed even though, as president, I am responsible for those deaths.  I didn't list the over 2000 people killed in my over 300 Drone Strikes in Pakistan or the 1543 US service members killed in Afghanistan since I became president and princess in 2009.  I'm a big frilly princess!  Did I mention my single tear?" Isaiah archives his comics at The World Today Just Nuts.