Kat's Korner: Maps is so much better when he's original

Kat: I don't mean to start any blasphemous rumours, but I think that Maps has a sick sense of humor, and when I listen I expect to find him stealing -- from others.  This is the room, the start of it all, no portrait so fine, only sheets on the wall, I've seen the nights, filled with bloodsport and pain, and the songs copied, the songs copied -- by Maps. You can take this declaration of war, step right back, put on your coat and your hat, gonna avoid you copycat.  Shoplifters of the world, unite and take over, copycats of the world, hand it over. 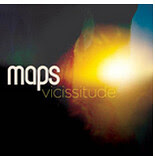 That's what runs through my head as a listen to Maps' new album Vicissitude -- Depeche Mode, Joy Division, Erasure and the Smiths.  The Smiths because he's going for Morissey angst combined with music which requires ignoring Morissey's solo ouput and focusing instead on the zenith of the period when Morrisey, Johnny Marr, Mike Joyce and Andy Rourke showed you could be moody and rock out.  Depech Mode, Joy Division and Erasure because, try as they may, no one's ever topped The Smiths so better to go to keyboard and be a moody Abba style European group.  Of course, Andy Bell could actually conceive a catchy melody.

As "A.M.A." and "I Heard The Same" makes clear, melodies do not come naturally to Maps. To give it some sort of semblance of melody the practically spoken word vocal of the verses to "I Heard The Same" are triple-tracked with what we'll call vocal chants.   The last third of the song is nothing but generic keyboard programming -- pre-sets many of us will recall existing in the mid-70s when organs were briefly a mini-rage and carried at Sears and other outlets.  Oh, look, someone's found the samba button.

Maps is a one-man band led and followed by Brit James Chapman.  Which sort of makes sense in that the work calls to mind a would-be producer cribbing from the snap and crips production Australian Mike Champman provided to so many artists.  With Blondie, the production style sharpened material like "Heart of Glass" but by the time Chapman made it to producing Toni Basil's "Mickey," it was nothing but hollow, surface noise.

I wanted to like this album a lot more than I did.  And when I think of the pre-release hype (the album comes out July 8th, next Tuesday) and James Chapman insisting repeatedly how this is an album about "change" and blah blah blah, I'm reminded that Joni Mitchell never felt the need to explain what Blue was about.  Not before the album came out, not after.  The music on that classic album spoke for itself.  She was fine sharing tales about the recording it but she didn't try to interpret it for you.  By contrast, Chapman's shared no stories about recording but can't stop telling you what the album is supposedly about.

I think that's because he failed.  If Vicissitude could speak for itself, than surely Chapman would let it and instead focus on sharing some details of what it was like being in the studio . . . with himself.

His vision of "change," ultimately, is as empty as Barack Obama's.

In fairness, there may be some themes there and maybe if he'd shut up about "change" in his interviews and allow the album to speak for itself, something would emerge?


The album often works best on songs like the title track where you really have no idea what he's saying.  As he offers staccato word chants -- the words mainly fly over your head and the music carries you along.  It helps that the song sounds original so you're not left saying, as with "Built To Last," "Is Depeche going to sue him over the similarities to 'Strangelove'?  Or will New Order beat them to it due to the similarities to 'True Faith'?"

Madonna, before the faux Brit accent and back when she ruled the radio, used to say, "I soaked up everything in my life and this is how it manifested itself."  But for the most part, what made it on to the airwaves had something unique to it that Madonna brought, something novel, something inspired.

The third album from Maps feels less inspired and more impersonation in too many places.

And it veers from one track to the next, never sure of mood or tone.

But maybe that's the point?  And maybe if the artist would stop telling us how we're supposed to feel in response to the album, we could have an authentic reaction?

If it sounds like I hate the album, the truth is I'm disappointed in it.

On "You Will Find A Way," Chapman discovers originality and a melody -- in the process he comes up with a song that could have dazzled in the days of eighties keyboard-based Brit bands.  Even his lyrics work here.  Better than "You Will Find A Way" is  "This Summer" which shows true musical depth.

In those two songs, you hear an original talent who really does have something to say.  Maybe next time, "the change" he could focus on is trusting himself and grasping Maps isn't a cover band.  His recycling will no doubt please James Chapman's already eager fan base, but finding -- and making music in -- his own voice will take him to a whole other level.