The greed, the illegality

Just as the Iraq War was about 'weapons of mass destruction,' the illegal spying is about 'terrorism' and 'safety.'  In other words, not at all.

And the greedy will always expose themselves.

Journalist and attorney Glenn Greenwald appeared on CBC's As It Happens with Carol Off and Jeff Douglas (link is audio) to discuss the latest revelations which finds Canada spying for financial interests/desires and how (Greenwald) "the leaders of the United States and Great Britain and Canada routinely mislead not only the world but their own citizens about what this spying system is actually designed to achieve."  Here's an excerpt of the nine minute segment.


Carol Off:  Mr. Greenwald, what intelligence from Brazil does it seem that Canada was after?


Glenn Greenwald:  Pretty clearly the business of the ministry that they targeted has almost everything to do with economic and industrial issues and nothing to do with national security or terrorism.  There are substantial interests on the part of Canadian industry in mining and minerals in Brazil and other forms of energy and it seems rather clear that that type of information they were seeking.

Carol Off:  And two-thirds of all mining in the world is apparently based in Canada with a large part of it -- the interest -- being in Brazil.  Do you know what Canada actually got?  Do you know what intelligence they were actually able to glean from this?

Glenn Greenwald:   Not based on the reports and the documents that we published.  There are a lot of other documents in the list of materials that we have that deal with Canadian espionage and other forms of hacking and spying in conjunction with the NSA that we're going to continue to report on.  But in the document yesterday, it seems clear they're satisfied with the espionage program but nothing specific about what exactly they collected.

Carol Off:  And what access did they get?  Can you describe was it documents, phone calls?  Where was the information gleaned from?

The US National Security Agency has been accused of spying on Brazil's biggest oil company, Petrobras, following the release of more files from US whistleblower Edward Snowden.
The latest disclosures, which aired on Brazil's Fantástico news program, have led to accusations that the NSA is conducting intelligence-gathering operations that go beyond its core mission of national security – often cited as the key distinction between the agency and its counterparts in China and Russia.
The revelations are likely to further strain ties between the US and Brazil ahead of a planned state dinner for president Dilma Rousseff at the White House in October. Bileteral relations have already been muddled by the earlier release of NSA files showing the US agency intercepted Brazilian communications and spied on Rousseff and her aides. 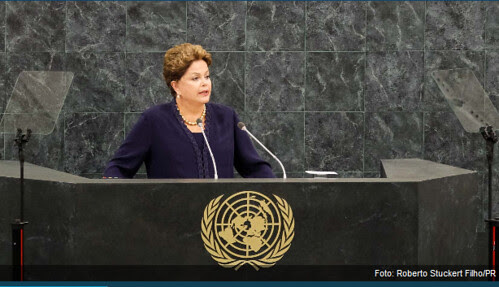 Recent revelations concerning the activities of a global network of electronic espionage have caused indignation and repudiation in public opinion around the world.

In Brazil, the situation was even more serious, as it emerged that we were targeted by this intrusion. Personal data of citizens was intercepted indiscriminately. Corporate information - often of high economic and even strategic value - was at the center of espionage activity. Also, Brazilian diplomatic missions, among them the Permanent Mission to the United Nations and the Office of the President of the Republic itself, had their communications intercepted.


Tampering in such a manner in the affairs of other countries is a breach of International Law and is an affront to the principles that must guide the relations among them, especially among friendly nations. A sovereign nation can never establish itself to the detriment of another sovereign nation. The right to safety of citizens of one country can never be guaranteed by violating fundamental human rights of citizens of another country.

The arguments that the illegal interception of information and data aims at protecting nations against terrorism cannot be sustained.


Brazil, Mr. President, knows how to protect itself. We reject, fight and do not harbor terrorist groups.


We are a democratic country surrounded by nations that are democratic, pacific and respectful of International Law. We have lived in peace with our neighbors for more than 140 years.


As many other Latin Americans, I fought against authoritarianism and censorship, and I cannot but defend, in an uncompromising fashion, the right to privacy of individuals and the sovereignty of my country. In the absence of the right to privacy, there can be no true freedom of expression and opinion, and therefore no effective democracy. In the absence of the respect for sovereignty, there is no basis for the relationship among Nations.

We face, Mr. President, a situation of grave violation of human rights and of civil liberties; of invasion and capture of confidential information concerning corporate activities, and especially of disrespect to national sovereignty.

We expressed to the Government of the United States our disapproval, and demanded explanations, apologies and guarantees that such procedures will never be repeated.

Friendly governments and societies that seek to build a true strategic partnership, as in our case, cannot allow recurring illegal actions to take place as if they were normal. They are unacceptable.


Brazil, Mr. President, will redouble its efforts to adopt legislation, technologies and mechanisms to protect us from the illegal interception of communications and data.


My Government will do everything within its reach to defend the human rights of all Brazilians and to protect the fruits borne from the ingenuity of our workers and our companies.


The problem, however, goes beyond a bilateral relationship. It affects the international community itself and demands a response from it. Information and telecommunication technologies cannot be the new battlefield between States. Time is ripe to create the conditions to prevent cyberspace from being used as a weapon of war, through espionage, sabotage, and attacks against systems and infrastructure of other countries.


The United Nations must play a leading role in the effort to regulate the conduct of States with regard to these technologies.


For this reason, Brazil will present proposals for the establishment of a civilian multilateral framework for the governance and use of the Internet and to ensure the effective protection of data that travels through the web.


We need to create multilateral mechanisms for the worldwide network that are capable of ensuring principles such as:

1 - Freedom of expression, privacy of the individual and respect for human rights.

2 - Open, multilateral and democratic governance, carried out with transparency by stimulating collective creativity and the participation of society, Governments and the private sector.

3 - Universality that ensures the social and human development and the construction of inclusive and non-discriminatory societies.

4 - Cultural diversity, without the imposition of beliefs, customs and values.

5 - Neutrality of the network, guided only by technical and ethical criteria, rendering it inadmissible to restrict it for political, commercial, religious or any other purposes.

Harnessing the full potential of the Internet requires, therefore, responsible regulation, which ensures at the same time freedom of expression, security and respect for human rights.


You can find her speech in full [PDF format warning] here.  The NewsHour (PBS) has video of the speech posted here.