Nikita wraps up tonight on The CW (Ava and C.I.)

Tonight on The CW, Nikita concludes.

Tonight at nine pm EST, 8 Central, the show wraps up.

For those who missed the five previous episodes (season four was only six episodes), you can stream them at The CW. 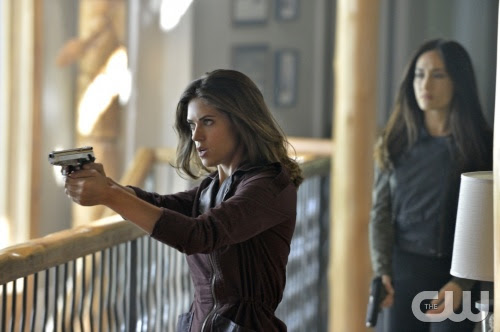 As the show winds down, it's finally getting credit for some of its accomplishments such as Maggie Q's excellent performance as Nikita.  It's also beginning to get recognition for being a series with strong women. Holding the gun in the photo above is Lyndsy Fonseca who has played Alex for four seasons.

Nikita is based on what came before.

It starts with Luc Besson's classic film Nikita.  Anne Parillaud plays the title role in the 1990 film, a woman who takes part in a drug store robbery and kills a police officer.  She's convicted, a secret government agency fakes her death and enrolls her in a program to become an assassin.  It's a pass/fail class.  If she passes, she will leave the underground compound and conduct assignments.  If she fails?  She'll be killed.

In 1993, John Badham directed an American version entitled Point of No Return.  Bridget Fonda stars as a junkie named Maggie who is convicted of killing a police officer in a drug store robbery and receives the death penalty.  But she's really still alive.  A secret government agency faked her death and they're training her to be an assassin.  The variations between the American and the French-Italian versions?  Dermot Mulroney is attractive but that's not reason enough to repeatedly deal with his character's inadequacy issues.  Those didn't sprout up in the earlier version.  Anne Bancroft takes over the Jeanne Moreua role and, comparing the two,  you realize not only what a rich role Amanda is for actresses but how differently two great actresses can shine in the same part.


The other big difference?

Bridget had to endure 'criticism' Anne Parillaud never had to put up with.  As a foreign actress, she was largely immune to male American critics thoughts that they controlled actresses.

For example, Gene Siskel went on his stupid TV show to pan the film and explain what was lacking, what was really needed, were shots of Bridget fondling the rifle.

Yes, he really said that.

And, yes, it was accepted as within the realm of professional criticism.

And, yes, he should have been called out but instead got praised by a feminist or 'feminist' actress who was in the closet at the time and desperate to flirt with him on air. (And, yes, that was really, really revolting to see.)

Next up was the TV show La Femme Nikita in 1997 (USA network aired it in the US).

Apparently sharing Siskel's need to 'tart up' the character, Peta Wilson's Nikita was an innocent and never was hooked on drugs.  She's set up by this secret government agency so they can train her. The big change here is that Nikita becomes involved with her trainer.  Here he's Michael (Roy Dupuis) and it's not an infatuation -- in the two films, when the woman realizes her first date with her trainer is actually her first assignment that he's supervising, she no longer has romantic feelings for him.  The series ran for 96 episodes (four seasons) and was USA's number one drama in the ratings in each of its four seasons.

In September 2010, Nikita debuted on The CW.

As we watch the drug addict be arrested and killed or 'killed' and recruited . . . 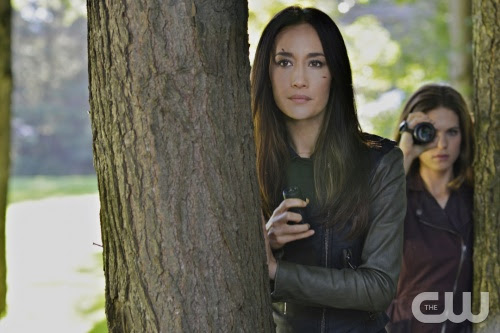 Nikita's already left the organization (Division).  She realizes that they're lying about what they're doing, that they're a rogue agency and she wants to bring them down.

So she recruits Alex before they can and Alex becomes her eyes and ears on the inside allowing her to foil Division's actions throughout season one.  Alex has to deceive her trainer, Amanda (Melinda Clarke) and Percy (Xander Berkeley).

Season two is about Michael joining the effort.  Her former trainer (played by Shane West) joins Nikita, Alex and Birkhoff (Aarn Stanford) in an attempt to bring down Division.  Percy's on the run and Amanda's now running the agency.

Season three is the team -- joined by Sonya (Lyndie Greenwood) -- is the team running Division for the President of the United States Kathleen Spencer (Michelle Nolden).  Amanda forces Nikita to kill the president but, at the White House, Nikita can't go through with it.  At which point, President Spencer grabs the gun and shoots herself.

Season four was the whole world looking for assassin Nikita Mears -- who the news media pointed out was supposedly executed years ago.  President Spencer was a double.  Nikita, Michael, Alex, Sonya, Owen/Sam (Devon Sawa), Birkhoff and Ryan (Noah Bean) expose the scheme and rescue the president as Amanda dies in an explosion.  But that was a trick on Amanda's part and tonight Nikita and Alex go up against their greatest enemy to try to bring her down and to avenge Ryan's death.

In season one Amanda was powerful.  By season two, she's running things.  When Division is out of her hands, she teams up with the Russians.  When that doesn't work out, she's got a cartel to fall back on.

Melinda Clarke's done an incredible job playing Amanda these four seasons.  She's added layers while never making you feel sorry for Amanda (Amanda would reject anyone feeling sorry for her).

And Alex and Nikita's partnership really has been the cornerstone.  The two women have fought, have had their differences, but have always come through for one another -- despite Alex being hypnotized by Amanda, despite Nikita killing Alex's father, etc.

So it's fitting that last Friday's episode ended with Nikita calling Alex and the two gearing up to end Amanda forever. 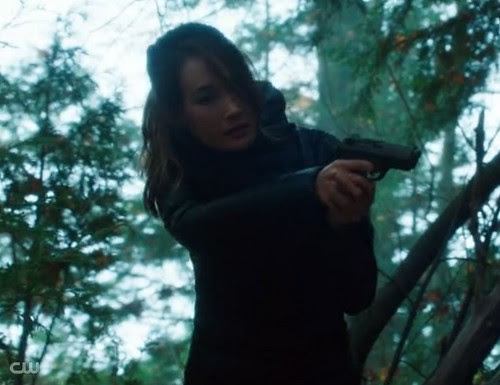 Maggie Q has been amazing as Nikita.  Like the three actresses before her, she's put her own individual stamp on the role.

She's also been the only Asian-American to star in an American TV show in prime time this decade.  (Her mother is Vietnamese.)


As we noted back in March's "TV: Nikita's greatest foe:"

In the US versions, Nikita's been blonde.  In all three previous versions, Nikita's been White.  Maggie Q is bi-racial.  With a White father and a Vietnamese mother, she's Asian-American.  And carrying her own show.
August 27, 1951, The Gallery of Madame Liu-Tsong aired its first episode.  That DuMont Network program featured Asian-American actress and star Anna May Wong.  Wong had found fame in silent films, then moved on to talkies before pursuing the stage and overseas films. At the age of 46, she began starring in The Gallery of Madame Liu-Tsong which was the first TV series in the US to star an Asian-American woman.  And her character?  A spy.
Much is rightly made of African-American Kerry Washington being the star of ABC's one hour drama Scandal.  Similar attention should focus on Maggie Q's accomplishment.
Q's carried the series for three years.  She's played a vengeful and untrusting Nikita who wanted to bring down Division who managed to transform into a team leader in the second season and to someone with an ever increasing sense of right and wrong in the third season.  She's handled each evolution with skill and careful shading, forever finding new dimensions in Nikita -- the trained assassin who fights her way back to humanity.


With Nikita wrapping up, no Asian-American actress carries a TV show.  Lucy Liu does co-star with Jonny Lee Miller on CBS' hit series Elementary.  (Liu's parent immigrated from China.)  Co-starring's nothing to sneeze at and it's part of the ladder Liu's been climbing throughout her career which includes a supporting role on Ally McBeal, success in films (including the two Charlie's Angles films) and starring in ABC's Cashmere Mafia.


Whether you've watched every episode -- and maybe blogged about them as Mike has -- or checked in and checked out on a show that The CW has repeatedly shuffled around, tonight's your chance to see how it all ends.