They're huffing and puffing on CNN about 'ISIS' allegedly executing 1700 Iraqi military forces.  While at the same time sneering that the photos don't show enough people (CNN's blood lust needs many corpses apparently) for it to be 1700.

CNN is outraged that Iraqi soldiers are being killed in a war.

Outaged not for peace reasons, you understand, but because their authoritarian sensibilities have been offended.

Don't ever forget that.

At the start of the year, he began bombing residential areas of Falluja -- a legally defined War Crime -- killing and wounding civilians.

It has gone on for six months.

Where's the CNN anchor expressing outrage over those actions? 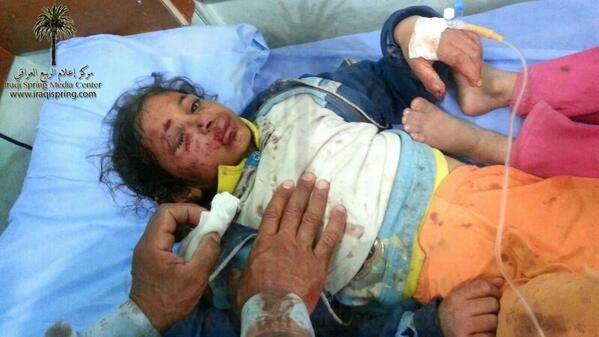 
That's one of the many children who've been wounded from the War Crimes of thug Nouri al-Maliki.

And CNN has never bothered to let American viewers know about that.

This morning, CNN hops a high horse to fret and worry over the state of Iraqi soldiers -- who are carrying out the War Crimes that Nouri is ordering.

CNN has time for that, time to lick the crotch of any military, they just don't have the time to defend the civilians of Iraq.

Maybe if they'd ever done their damn job this year, the world would have recoiled in shock and Nouri would have been put under real pressure to stop targeting Sunnis?

If that had happened the current fighting might not be happening.

CNN's made a fool of itself yet again.