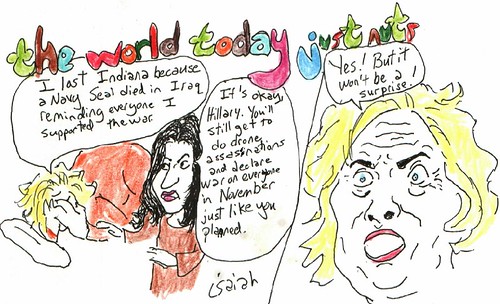 Isaiah's latest THE WORLD TODAY JUST NUTS "She Wanted It To Be A Surprise."  A distraught Hillary Clinton whines, "I lost Indiana because a Navy Seal died in Iraq reminding everyone I supported the war."  Her chief aid Huma Abedin tries to console her and states, "It's okay, Hillary.  You'll still get to do drone assassinations and declare war on everyone in November just like you planned."  Hillary snarls, "Yes! But it won't be a surprise!"   Isaiah archives his comics at The World Today Just Nuts.


the world today just nuts
comic
youre stuck with me