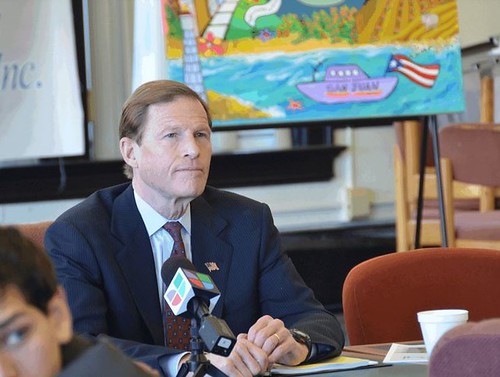 Senator Richard Blumenthal (above) is the Ranking Member of the Senate Veterans Affairs Committee.  His office issued the following this week:

“This heartbreaking data—20 veteran suicides every day—mocks our promise to keep faith with our nation's heroes. ‎The data has been updated, but VA action must be as well. VA must more effectively use the new tools provided by recent statues to do the outreach, research and treatment that can help cut this number to zero. The Clay Hunt SAV Act and the Female Veterans Suicide Prevention Act are positive steps, but much more is necessary. These new numbers should be a continuing call to action.”

As ranking member of the Senate Committee on Veterans’ Affairs, Blumenthal is a dedicated advocate in the Senate to preventing veterans suicide. He successfully led the Clay Hunt Suicide Prevention for American Veterans Bill, which was signed into law last year, with Senator John McCain (R-AZ) to improve mental health care and suicide prevention resources for veterans. He also joined a bipartisan group of his colleagues to introduce the Female Veterans Suicide Prevention Act, which was signed into law last month, to ensure VA provides the mental health and suicide prevention programs that meet the gender-specific needs of women veterans.

The final report will be publicly released later this month. Key findings of the analysis will include:
VA has implemented comprehensive, broad ranging suicide prevention initiatives, including a toll-free Veterans Crisis Line, placement of Suicide Prevention Coordinators at all VA Medical Centers and large outpatient facilities, and improvements in case management and tracking.  Immediate help is available at www.VeteransCrisisLine.net or by calling the Crisis Line at 1-800-273-8255 (press 1) or texting 838255.

The VA also offers the Coaching Into Care Program to assist family members and friends help a veteran seek care. Coaching Into Care provides a ‘coaching’ service for family and friends of veterans who see that a veteran in their life needs help. Coaching involves helping the caller figure out how to motivate the veteran to seek services. The service is free and provided by licensed clinical social workers and psychologists. Since the inception of the service in January 2010 through November 2014, Coaching Into Care has logged 18,088 total initial and follow-up care.