USA TODAY trumpets the end of the Tal Afar operation:

The United Nations Office for the Coordination of Humanitarian Affairs issued the following:


Situation overview:
The military operation to retake Telafar city and district from Islamic State in Iraq and the Levant (ISIL) began on 20 August, and unfolded more rapidly than initially anticipated. On Saturday 26 August, Iraqi Security Forces (ISF) entered Telafar city and raised the Iraqi flag in the city centre. ISF took full control of the city and the eastern parts of the district. Current media reports indicate ISF is in the final stages of the military operation in northern Telafar district. It is anticipated the entire district will be under ISF control within the coming days.
Displacement:
At the onset of the operation, an estimated 10,000 to 40,0001 people remained inside Telafar. However, midway through the week-long operation, reports indicated that at most only a few thousand remained in the entire district. Without access to the area, verification was impossible and it is now thought that most residents left by the end of June. The current number of civilians who remain in Telafar city is believed to be low.
According to figures released by authorities, 22,000 people left the area from the end of April to 13 August. Partners on the ground reported an additional 20,204 people fled via two mustering points of Buweyr and Musaid between 14 and 22 August.
Since April the number of documented IDPs who left Telafar thus stands at approximately 42,000. It is widely understood that thousands more may have fled since April; their numbers undocumented.
After the city centre was retaken on Saturday 26 August, there were reports that a further 1,500 people were displaced. Among these, about 1,000 attempted to cross to safety at the Bshar check point. Whilst waiting for access, nearby mortar fire started from ISIL-held areas and they turned back. The next day, all 1,500 reached ISF controlled Ayadiya sub-district and were transported to Hammam Al Alil. On 28 August 1,500 IDPs were permitted to cross at Bshar check point, where they received food, WASH and medical assistance. Health partners reported 90 people received medical assistance. The most serious cases were transferred to a nearby hospital. The Joint Crisis and Coordination Centre (JCC) transferred 1,040 to Hammam Al Alil that day. An additional 460 IDPs await transfer to Hammam Al Alil.
Camp Capacity:
On Saturday, 360 families were transferred from the screening site of Hammam Al Alil to the new 3,600 plot capacity camp in Al Salamiyah Nimrod. A further 347 families transferred on Sunday. UNHCR reported an additional 1,500 families (approximately 9,000 people) sheltering at the transit point of Hammam Al Alil will move to Al Salamyiah Nimrod camp.
Protection partners are an integral part of the camp registration process for IDPs, and work to identify and refer the most vulnerable cases to specialized services in a timely manner. Although unconfirmed, initial reports suggest the government intends to accelerate the return of civilians to Telafar where possible.

If the point is to reduce historic cities and towns to rubble and send Iraqis off to displacement camps (and tents for the harsh winter), call Hayder al-Abadi's 'liberation' operations a success.


Meanwhile, the US government looks for something -- anything -- to applaud.

Iron 6‏ @Iron6_1AD  13h13 hours ago
#Marksmanship #Training at Camp #AlAsad. This training is critical to enabling local security forces to liberate their homeland from #ISIS.

U.S. Dept of Defense‏Verified account @DeptofDefense  8h8 hours ago
Locked & loaded! An #Iraqi #soldier aims down the sights of his weapon during a combined training activity in #Iraq. #InherentResolve 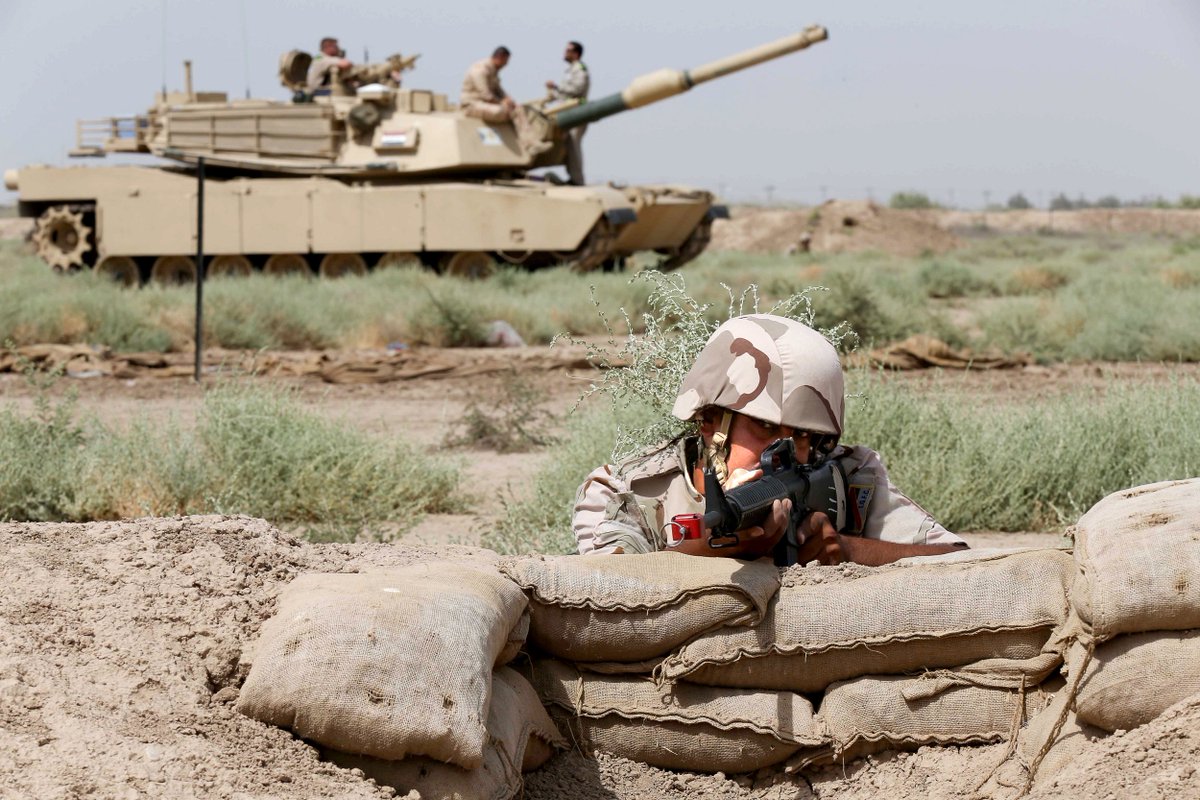 Yes, the Iraqi forces have been trained and re-trained over and over.  The only exception a brief period in 2012 when they didn't want help from the US State Dept -- at which point, later that year, a DoD Memorandum of Understanding was signed to allow DoD to take over training again.


December 6, 2012, the Memorandum of Understanding For Defense Cooperation Between the Ministry of Defense of the Republic of Iraq and the Department Defense of the United States of America was signed.  We covered it in the December 10th and December 11th snapshots -- lots of luck finding coverage elsewhere including in media outlets -- apparently there was some unstated agreement that everyone would look the other way.  It was similar to the silence that greeted Tim Arango's September 25th New York Times report which noted, "Iraq and the United States are negotiating an agreement that could result in the return of small units of American soldiers to Iraq on training missions.  At the request of the Iraqi government, according to [US] General [Robert L.] Caslen, a unit of Army Special Operations soldiers was recently deployed to Iraq to advise on counterterrorism and help with intelligence."

Or after over a decade of training, is that question still too touchy to be asked?

Maybe Iraq can't keep fighters because they don't have a real government?


Maybe the US can't impose a government and its own hand picked leaders upon another country and expect the citizens of that country to fight for the US-installed government.

Maybe hostilities between the various sects isn't the real problem -- maybe it's that Iraqis aren't buying in on a government created by the US, a government that still doesn't represent them or their interests?

That must scare a number of people in the US government.

It would appear the Iraqi people plan to wait this out.

And, historically, when that happens, the native people win.

Fourteen years, countless lives, trillions of dollars and the puppet government can still not command respect or loyalty.


The puppet government's been about as convincing as the Turkish government.  Turkey's maintained that they just want to help -- even when told to get their military out of Iraq.  'No, no, we'll stay and help!'  That help has translated as over a decade of bombings -- mainly farms and villages.

They insist they're bombing 'terrorists.'

But hasn't the Turkish government's reaction to the KRG holding a referendum on independence (planned  for next month) made clear that they pretty much see all Kurds as terrorists?


A Kurdish militant group claimed today that it has captured Turkish
intelligence officers.
Diyar Xerib, a Kurdish leader linked to the Kurdistan Workers Party (PKK),
said the PKK had “arrested” two Turkish nationals working for Turkey’s national spy
agency MIT, but had refrained from publicizing the incident so as not to create
problems for the local government.
“No doubt the PKK can publish news about the arrests of the MIT officials
who wanted to make the area a place to carry out their dirty operations, the
biggest of which was to assassinate a prominent PKK official,” Xerib told
the pro-PKK Roj news outlet.
News that the PKK had captured Turkish intelligence officials first surfaced
last week. Accounts vary but according to several Iraqi Kurdish news
organizations, the Turkish spies had traveled to Sulaimaniyah, the de facto
administrative capital of the eponymous province in the eastern part of Iraqi
Kurdistan.

The following community sites -- plus Jody Watley and THE PACIFICA EVENING NEWS -- updated: