Kevin is running for the US Senate and represents change.


At WAR ON THE ROCKS, War Hawk Douglas Ollivant sees a 'turned corner' -- he's being seeing 'turned corners' -- while walking into one wall after another -- for nearly all 15 years of the ongoing Iraq War:


Iraq continues to move slowly but surely towards recovery. The defeat of ISIL — despite a small insurgent pocket remaining in Kirkuk and Diyala — and the (relative) success of the Kuwait conference give Iraq the tools needed to continue moving forward and begin to solve its myriad of security, economic, and societal problems. Unresolved issues — the integration of Iraq’s battered Sunnis, the relationship with the United States, and the diversification of the national economy, to mention just a few — could lead to a resurgence of the Sunni extremism that saw its latest manifestation in ISIL.
First, however, Iraq must successfully navigate the next election, scheduled for May 12. This election — the second since the end of occupation — presents three key questions for Iraq: First, will Haider al-Abadi be able to retain the prime ministry? Second, will cross-sectarian lists find success? And third, will new voices be able to emerge and take real power? The proliferation of cross-sectarian and pro-reform parties is an encouraging sign, but it remains to be seen whether change has truly come to Iraqi politics at this early stage.

There's so much wrong in the above but what can one expect from the counter-insurgency cheerleader who was wrongly praised and sucked up to by the likes of the breasty Thomas E. Ricks?  Douglas still thinks he appears an expert despite his predictions versus the reality of what has actually happened.

In a world with actual consequences, the only thing Douglas would produce at this late date is snorts of derision every time he dared to open his mouth on Iraq.

ISIS is carrying on a low-level insurgency in Iraq, one that is concentrated in Diyala, Salahuddin and Kirkuk provinces.
Dozens of civilians and members of the Iraqi Security Forces have been killed along with a similar number of ISIS fighters, according to numerous reports. The US-led coalition is still carrying out air strikes against ISIS targets, even though the country was supposed to have transitioned to stabilization in the run-up to elections in May.

Poor Dougie.  Reality's always had a nasty way of slapping the War Hawks across their lying faces.

Abby Martin‏Verified account @AbbyMartin 7h7 hours ago
Abby Martin Retweeted Ben Norton
“We don’t do body counts” - General Tommy Franks, Commander of US invasion of Iraq, 2002 US officials can’t even be bothered to know how many lives they take in the wake of their imperial catastrophes
Abby Martin added, 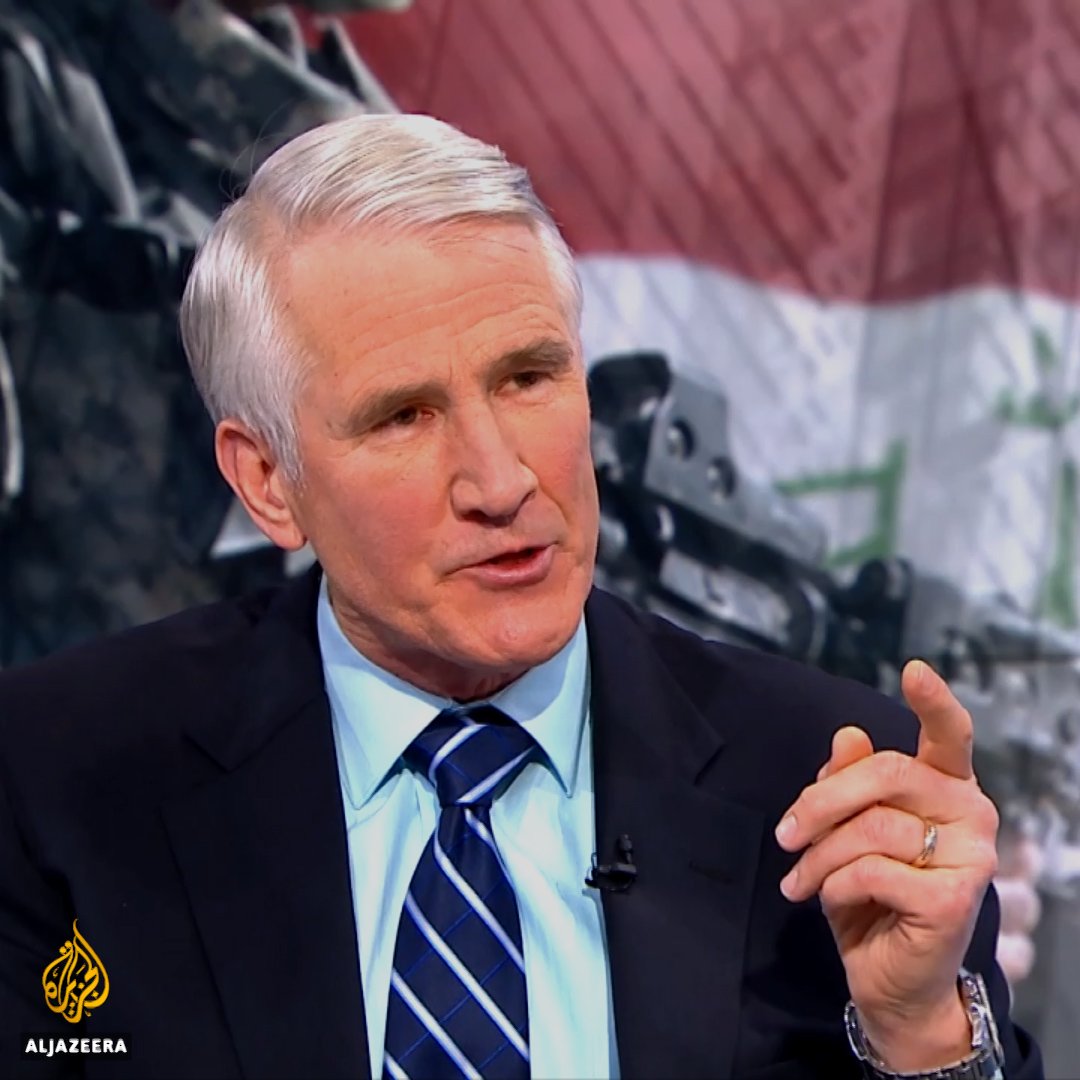 1:42
Ben NortonVerified account @BenjaminNorton
Top US military official: "We got out of the body count business years ago."
65 replies471 retweets770 likes


But the US didn't get out of the body count business years ago.  And it doesn't matter, Abby, what s**t Tommy Franks spewed.

What's Abby referring to?  The interview we noted Saturday.

Meanwhile, as the Iraq War is about to enter the 15th year, ALJAZEERA's UP FRONT asks, "Is it time for the US to apologize for invading Iraq?"

Mehdi Hasan:  Okay.  So in Falluja, how many civilians were killed in Falluja, do you think, by the US forces in 2004?

Brig Gen Mark Kimmitt: I have no idea.

Brig Gen Mark Kimmitt: You should tell me.

Mehdi Hasan: Oh, no.  You should tell me.  You were in charge of the US military that was doing the killing.

Brig Gen Mark Kimmitt:  I wasn't in charge of the US military.

Mehdi Hasan:  Okay, you were a senior commander in the US military that was doing the killing.

Brig Gen Mark Kimmitt: I was a senior officer in there, okay?

Mehdi Hasan: So how many people died in Falluja?

Brig Gen Mark Kimmitt: How many people died in combat in Falluja?

Mehdi Hasan:  How many civilians were killed by US forces in Falluja?

Mehdi Hasan: No.  That's not what I asked.  How many were killed?

Mehdi Hasan: Do you care?

Mehdi Hasan: You've had 14 years to find out.

Brig Gen Mark Kimmitt: Every loss of a civilian life is a tragedy.  I accept that.

Mehdi Hasan: So every loss is a tragedy?  How many died in Falluja?

Mehdi Hasan: Why not?  That's a bizarre thing.  You go to war.  You bomb a city.  You don't bother to find out how many people you killed?  Intentionally or unintentionally?

Brig Gen Mark Kimmitt: We got out of the body counting business years ago.


He made that claim.

And he wasn't challenged.

He made that claim and he got away with it because so many are so under-informed.

People who are, for example, 13 may not remember this because they're really too young too.  But the US government hid behind the (earlier) pose of 'we don't do body counts' when starting the Iraq War.  Of course they did body counts.  They did them all along. Three years after the Iraq war started, those who stated 'of course the US is keeping a body count' were backed up with one of the most forgotten stories of the Iraq War.


As with so many of the important stories during the Iraq War, that report came from Knight Ridder.  The US government was keeping a body count on Iraqis killed in the violence.  They were keeping the count and a military officer freely showed the count to a Knight Ridder reporter.

It shouldn't be hidden history but it is.

Bill Moyers wasn't interested in praising that report when he returned to PBS with Bill Moyers Journal and that was probably due -- Moyers sexism is well known and has been for decades -- to the fact that a woman broke that story: Nancy A. Youssef.

She also wasn't helped out by her outlet.  She broke the news for Knight Ridder Newspapers . . . on the last day of the chain's existence.  The very next day it was McClatchy Newspapers and McClatchy had little to gain from trumpeting a Knight Ridder report.  Things might have been different if the report had been held for one more day allowing it to become McClatchy's first big scoop.

From the June 26, 2006 "Iraq snapshot" (and I'm correcting the spelling of Knight Ridder):
In what might get the most attention today, reporting from Baghdad, Nancy A. Youssef (Knight Ridder) breaks the news that the United States now admits to keeping some figures on Iraqis who have died during the illegal war. Lt. Gen. Peter Chiarelli tells Youssef that "the number of civilian dead and wounded" via US troops "is an important measurement." Chiarelli reveals that "he reviews the figures daily." The US government has denied that any figures were being kept.


I was wrong (not the first time, not the last time), it didn't get the most attention that day.  It didn't really get any attention, as we'd note in  "2006: The Year of Living Dumbly" -- including it  in a long list of Iraq related news that independent media couldn't be counted on to report in the summer of 2006:

Or how about the fact that the US military was keeping a body count on Iraqi deaths? Nancy A. Youssef broke that story, that the US military had been doing that for almost a year, in June. That news lost out to elections . . . in Mexico -- what independent media was all geared up to make the summer story until they dropped everything to head off to the Middle East.


Despite the knowledge that DoD was keeping a count, other outlets ignored Youssef's story and there was never any pressure for the government to supply those figures to the press.  So hidden away was Youssef's scoop that weeks later, Phyllis Bennis would go around, weeks after, insisting publicly that  US government didn't keep a body count -- like so much of America, even she wads unaware of Nancy Youssef's report.  As Phyllis was called out (and not just within this community) and as numbers -- US government numbers -- began to appear in the press, suddenly Phyllis was aware.  Basically, it took over a year for her to finally grasp that the voices she was hearing were actual people and not personalities inside her head.  That led her to declare in September 2007 on CounterSpin:

Now apparently they're making body counts. So nobody has asked them, "Excuse me, general, when did you start doing body counts?" From the beginning you told us 'We don't do bodycounts.' When did that [tracking the number of Iraqis killed] begin? When do these figures start from?


There was no great mystery, just a failure to pay attention.  (In fairness to Phyllis, corporate media wasn't interested in trumpeting Nancy Youssef's scoop and Panhandle Media was working other grudges when Youssef's story broke so they were unable to amplify it.)


Mehdi Hasan's a War Bitch.  Those of us who remember him on NPR know that.  He's never bothered to learn anything of value and he puts his front paws on Samantha Power's ankles to hump her leg.  (Look, he's reTweeted her again, unironically.)  He's useless.  Which explains how he ends up at THE INTERCEPT.  What explains Abby Martin?

I try to be nice but you idiots never know what you're talking about.  You've failed to do the basic work required.  And then, after months of silence on Iraq, you show up and try to show boat like you're experts when you don't know s**t.

Anyone, in 2018, who wants to do an interview about Iraq body counts but doesn't know what Nancy Youssef reported on the last day of KNIGHT RIDDER, has not done the work required.

How is your stupidity any less damaging than Brig Gen Mark Kimmitt's lies?

I tried to be nice and 'support' Mehdi.  Even though he's worthless, hey, it was Iraq.  So on Saturday, we promoted the interview -- even though it was worthless as all of Mehdi's work is.

Abby, I guess everyone seems like a genius when you don't pay attention to the facts, huh?

Abby's part of a circle jerk and that's what makes her so useless.

What passes for success these days in Iraq?

The walls are constructed of cinder blocks, steel and concrete. Some have gates for pedestrian traffic. Others evoke the oppressive days of the Berlin Wall — towering concrete panels lined up in a row, and impassable.
The barriers snake through Tuz Khurmatu, turning it into a city of walls.
In years past, walls went up to protect against car bombs. Then Shiite Turkmens erected walls to guard against Islamic State after its resurgence in 2014. Now even after the jihadis have been driven out of the city, the walls still stand, and Tuz Khurmatu remains a flash point with an unstable melange of sects and ethnicities. Once united to fight Islamic State, Kurds, Turkmens and Arabs resumed viewing each other with hostility and suspicion.


Keep sniffing that sausage link love, Abby, but don't claim that it's helping the Iraqi people.  Maybe you should just go back to ignoring them -- as you've done for months now -- if this is an example of how you 'help' them?